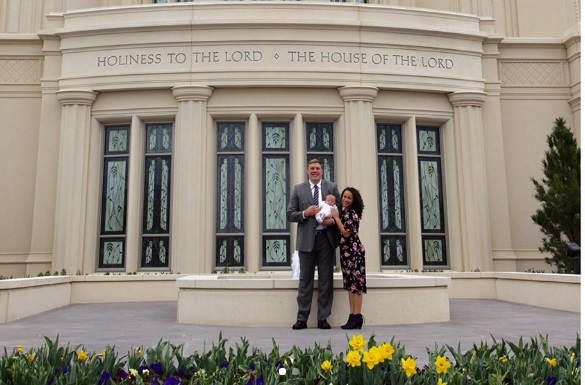 From Homeless Teen to RM and NFL First-Round Pick: How the Gospel Strengthens Garett Bolles

At one point in his life, Garett Bolles was living on the street; his only possessions were those wrapped in a plastic garbage bag. But on Thursday night, Bolles became a multimillionaire when he was picked number 20 overall during the first round of the NFL draft by the Denver Broncos.

After getting kicked out of five schools, spending a week in jail, and using drugs, Bolles found an unexpected home with LDS couple Greg and Emily Freeman.

"I can’t remember when he started calling me mom," Emily Freeman writes on Time Out for Women. "The boy my husband picked up on the curb and brought home [six] summers ago in August. The one who had been in jail for a weekend. The one whose friends were known by the Lehi police department on a first-name basis. The one whose family had just been evicted, and everyone else had found somewhere to stay. But nobody wanted this boy."

It was an unlikely fit, this 300-pound, 6'7" giant living in a home where the non-negotiable rules were that he needed to attend church, pay tithing, and get all of his friends approved by his new family. But during this time, "we started to watch his life turn around," Emily Freeman writes. "Perhaps the most rewarding experiences this life has to offer are the ones when you get to see God at work, doing what He does best ––molding, lifting, building. . . .

"Garett fell in love with God in a way he hadn’t ever before and his life began to change. Opportunities opened up. Things beyond our imagination. Opportunities, the likes of which would never have entered into our hearts."

Bolles served a mission, earned a full scholarship to Snow College, then played only one season of D-I football with the University of Utah, during which time he was named first-team All-Pac 12.

Truly, Bolles's journey has been remarkable if not miraculous. “This is a once-in-a-lifetime opportunity,” Bolles told Deseret News.

But with the excitement also came some pre-draft nerves. "We've been so excited for this week. . . but so nervous also," Emily Freeman wrote on Instagram. "Lots and lots of prayers. The phrase [Garett] has been saying throughout this week is 'act in faith." A small tender mercy greeted Bolles when he arrived in Philadelphia for the draft and helped calm his nerves: his hotel was right across from the LDS temple.

We've been so excited for this week...but so nervous also. Lots and lots of prayers. The phrase @gbolles74 has been saying throughout this week is "act in faith" the phrase I have been saying all week is "God will be present" It is my reminder that He is orchestrating what will happen this weekend. Imagine my delight to discover this building right outside the front door of our hotel here in Philadelphia. A constant reminder for both of us. God is so good. #garettsstory

Bolles has also found unique ways to remember his faith and keep the Spirit on the field. In fact, Bolles has covered his cleats with quotes from scriptures and inspirational quotes, so everytime he gets ready for a new play, he can be reminded of his divine potential as a son of God.

Have we talked about the cleats? Because it is one of my favorite parts of his football life. It all started during his first few weeks at Snow College. He was having a hard time remembering the plays. We talked about the power of the Spirit. How it can help you remember. "Find a way to keep the Spirit with you on the field" I encouraged. This was his solution. He writes inspirational quotes and scriptures on his game day cleats. Black sharpie on soft leather. Then every time he looks down he remembers who he is, where he came from, and where he is trying to go. I get a little giggle every time I think of the guy who lines up across from him. If that guy takes a second to read the words written on the cleats...faith, hope, charity, Son of God... I wonder if for a second he thinks Garett will play soft. For just a split second, until he gets pancaked right after the whistle. Love this kid. Love those cleats. #garettsstory #everypair #everygame

"'Return unto me and I will return unto you . . . and pour you out a blessing that there shall not be room enough to receive it' (3 Nephi 24:7-10). [This] is the story of Garett’s life. The one God is writing for him," Emily Freeman writes. "I think back to that summer afternoon in August, and I can’t help but wonder where Garett would be right now if he hadn’t chosen to love God."

Bolles told the Deseret News, “The good Lord knows where I’m going to get drafted. I’m ready to get to my city and start playing.”