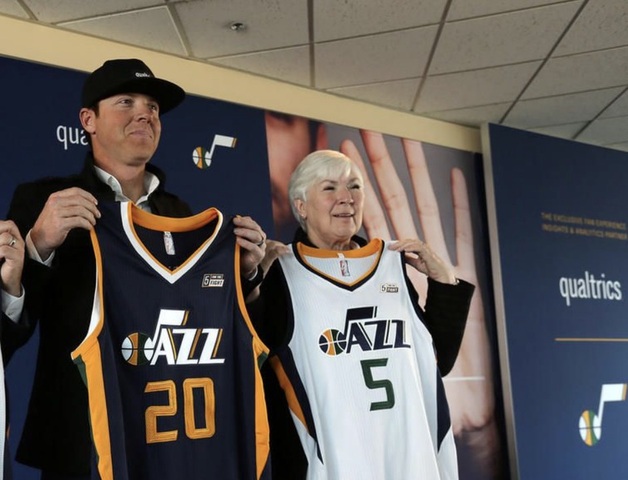 From one Latter-day Saint family to another: Utah Jazz to be sold for $1.6 billion

This morning, in a deal that shocked the sports world, the Miller family agreed to sell the Utah Jazz to Qualtrics founder and CEO Ryan Smith for $1.6 billion. Smith already has experience working with the Jazz, as he co-founded “5 For the Fight,” the non-profit organization that sponsors the patch on the Jazz uniforms and encourages everyone to give just $5 in the fight against cancer.

“I have known Ryan for several years and admire the values by which he and his wife, Ashley, live their lives. They have such love for and a connection to Utah and this team,” Gail Miller said, according to KSL.com. “After much soul searching, lengthy discussions, and extensive evaluations of our long-term goals, my family and I decided this was the right time to pass our responsibility and cherished stewardship of 35 years to Ryan and Ashley, who share our values and are committed to keeping the team in Utah. We have every confidence they will continue the work we have undertaken and move the team to the next level.”

The transaction marks a significant moment in Latter-day Saint culture as well, as both the Millers and the Smiths are members of The Church of Jesus Christ of Latter-day Saints. In fact, both Gail Miller and Ryan Smith, along with his wife, Ashley, have appeared on our All In podcast in the last year. In reviewing both of their interviews, it is easy to see areas in which their values align. So what do we know about these two business owners and how their faith has informed the way they have approached their professional endeavors? These quotes from their interviews with LDS Living may give you an idea.

“Rich is an expansion of your soul. Wealth is what you have as a result of the things you’ve done. But to be rich means that you have qualities, you have experiences, you have an expanded heart. You see life in a different way. You see it as a fullness.” -Gail Miller

“For me, nothing I’ve ever done has ever been great if I haven’t gone all in. And I think that, for me, and everything I’ve seen, it’s really clear. I mean, we had a phenomenal success in the eyes of the business world. And I’ll be honest with you, the day that we closed our deal and checks cashed and everything was there, it’s probably one of the most underwhelming days of my life from a success standpoint. I’m just going to be super transparent with that. So, if that’s super underwhelming, and I know that joy comes from serving, and I found it in the gospel, and I haven’t had it at all outside.” -Ryan Smith

► You may also like: Less than 2 years after $8 billion acquisition, Qualtrics CEO calls business success “underwhelming” in comparison to the joy of the gospel

“I know as a Relief Society president, I had the opportunity to serve in a lot of ways I never would have otherwise. And until I did that, I didn’t understand how closely service and love were connected. But when you serve somebody, you really do learn to love them. And you learn to love them because you get close to them and you understand their needs and their hurts and their wants and their accomplishments and their personality. And service is a gift; it’s really a gift that Heavenly Father gives us.” -Gail Miller

“We were in the middle of our IPO roadshow, we were getting ready to go public as a company. We had five kids, and life was just, I mean, it was probably one of the hardest years of our life. And we get a call, ‘Hey, will you guys go down to BYU and help serve in a bishopric?’ And I came home to Ash and I was like, ‘There’s no way. Like, isn’t there someone else, or isn’t there another time?’ And then it was really quickly that we went back to, ‘Hey, what are we trying to do here? Like, what’s our end goal?’ And the end goal that we had set out actually fit more into that plan. And if there was ever a time to go serve, it was probably now. I remember going into my admin at the time and being like, 'Okay, I’m gonna have to be here on Sundays.' . . . So if you actually find a way to prioritize, that was just such a strong evidence that we control our lives, and we can actually impact when we want to go all in on something.” -Ryan Smith

“We’re all in this together, and it’s God’s Church. And the service that we do—we’ll get the reward for whatever we do, we don’t need to be praised for it here. We need to do what Heavenly Father wants us to do, so that we can get His work done. And if we don’t need to be puffed up, if we don’t need the credit for bringing someone in or taking care of a child or whatever we’re asked to do, it’s not really for us. It’s for Heavenly Father, and He’s going to bless us and we’ll get our reward in time. So I think that’s where it’s at for me, is making sure that I’m doing the right thing at the right time in the right way that Heavenly Father would ask me to do. And I just I think the goal is to be good, and that’s reward enough.” -Gail Miller

“I could just see myself going back and saying, ‘Hey, how did we end up in this unintentional spot that impacted our family and our broader goal?’ And looking back over the tape, and being like, ‘Well, there was that other path that was put in front of you.’ And I think that what we’ve tried to do is just make those decisions wisely as much as we can. And once we make them, even those, you’ve still got to go do all the work and turn those decisions into good experiences.” -Ryan Smith

Future of the Jazz

In speaking with Miller last December, we discussed the unique approach the Utah Jazz has taken in trying to seek out players and coaches that have a certain set of values and who are not only the right fit on the court but also off the court.

“As we hire a coach, we let them know what our values are and what we expect and how we want our players to respond to the community and be a part of the community and be good people. And once in a while, we miss, but not very often,” Miller said, later adding, “We have really good people as players. Now, they are very competitive and that is a challenge in its own right. I don’t mind competitiveness, I think they have to have egos to do what they do.

She added that this is something you have to work to maintain.

Time will tell whether or not this is a culture the Smiths will be able to maintain, but Ryan Smith promised Miller in Wednesday's press conference that their commitment is to build on the Millers' legacy. If core values are any indication, it would seem the Utah Jazz culture will not experience a major transition in the changing of the guard.

Gail Miller might seem as though she has it easy—now. But she has experienced challenges in nearly every aspect of her life: financial struggles, family trials, and personal loss. Through it all, she has had courage to move forward and remain grounded in her faith. In Courage to Be You, Gail encourages readers to find their own path—with the help of the Lord. Her candid stories and personal insights about faith, hard work, grief, and many more topics are both fascinating and inspiring.