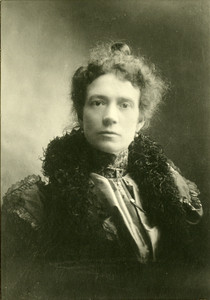 From 'plain' to plane: the travels of Ruth May Fox, Mormon young women leader

Traveling as an LDS young women leader in the early 20th century, Ruth May Fox spanned Utah by horse-and-buggy and the United States by airplane. Her great-great-great-granddaughter, Brittany A. Chapman, has studied her life in detail, and Thursday evening, Oct. 14, presented an account of Sister Fox's "well-lived" life in a lecture at the Church History Library in Salt Lake City.

"From the young girl just about to cross the plains to an impassioned leader among her peers to a seasoned member of the general board working with young women, to a fearless centenarian, she left a great impact on all in her sphere of influence, both among her posterity and the young women she was able to reach," said Sister Chapman, a historian with LDS Church History Department.

A celebrated poet, Sister Fox is perhaps best known today as the author of the well-known Mormon hymn "Carry On," (Hymns, No. 255). But in her day, she was familiar to Church members as the general president of the Young Ladies' Mutual Improvement Association from 1929 to 1937 and a member of the general board for nearly 40 years. Moreover, she was a tireless champion of the women's suffrage movement whose work helped ensure that Utah entered the union as a state in 1896 with a guarantee that its female citizens had the right to vote.