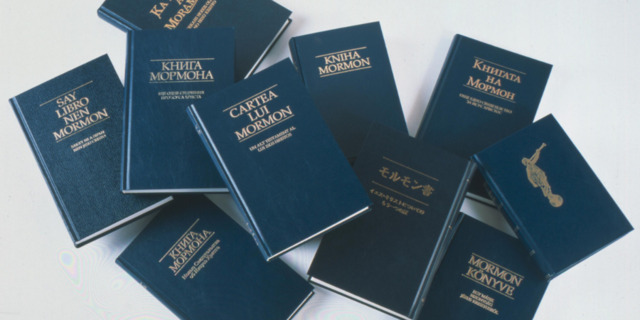 From stealing to healing: How one woman found hope through the Book of Mormon

On this week’s episode of This is the Gospel, three storytellers share why honesty plays a pivotal role in spiritual progression. Among these guests is Claire, who hid behind a “good girl” image to keep her shoplifting a secret from her family for as long as she could. But when her shoplifting became out of control and she started using drugs later in life, Claire found herself feeling hollow and desperate for change. Read what happened next when she asked an officer for a copy of the Book of Mormon while in jail.

So, the very first time that I shoplifted, I was about 12 years old. My friends and I, we hung out all the time and we would go to this store. We would ride our bikes or walk to the store that was in the neighborhood. And there was some candy that we wanted. We didn’t have enough money, and they were like king-sized caramel bars, I do remember.

So my friend was like, “Well, just put it in your bag really quick.” And we always had a bag or something, like a backpack. And it was with this guy that we really liked. I think we were trying to impress him. I think it was more of like, “Be cool in front of this guy, this skater guy.” So, we put the candy bars in her bag, and it was like such a rush, like, "Oh my gosh!"

And then leaving the store, and going back to the trail, and eating our candy bars, and laughing about it—just thinking that we were so cool because we got away with it. I think that it was a feeling of like being cool that really kind of drew me into doing it all the time with them because I wanted to be accepted so bad.

We started with the candy bars, my friend and I, and she was my best friend. She really was like my best friend. We were together all the time. We shoplifted not just candy but Chapstick and makeup. And then eventually, we started when I was about 14 years old—14, 15—we would ride the city bus to the mall and we would have our backpack. That’s when we started shoplifting clothes and shoving just tons of clothes in our backpacks. Eventually, it just got so easy, like I didn’t have any conscience of it anymore. As the little candy bar turned into Chapstick, turned into makeup, turned into clothes, my sense of this being wrong just kind of left.

► You may also like: Elder Holland shares ‘1 of the 10,000 reasons’ why he knows the Book of Mormon is true

I was raised to know right from wrong. I went to seminary and Young Women and Primary. My parents did everything to raise all six kids to be strong members of faith, and of honesty, and of truth, and trying to follow the Savior and all that He teaches. So, I kept my shoplifting from my parents by being a good girl. I was good at school. I never have liked contention, so I tried not to fight too much with my siblings or to cause too [many] problems.

So I don’t think my parents knew at all that there was this little secret that I had. And they were busy—they were very busy. They always had callings. My dad had started his business so he was always busy trying to get his business going. And I don’t fault them for not knowing because I tried to keep it a secret and I did really good at it. I was really good at not showing that I had this bad secret.

I think when things really started to spiral out of control was when I moved out after graduating high school, and I was on my own. I stopped going to church. I was 18 and free, and I was working as a cocktail server and so I was working the weekends. I just thought I was too busy to go to church so there was a big disconnect there. And I was hanging around with the wrong people, my coworkers. So, I really think I just lost myself. I lost what I knew growing up in my home.

I don’t think I really admitted that my shoplifting was a problem until I got caught. And then I continued to still do it. And then I got caught again. I got caught multiple times, and I even did jail time for it and I couldn’t stop. Even though I had money . . . it was stupid things I didn’t even really need. There’s no denying that it’s a problem when you take stuff that you don’t even really need and you’ve been in jail for it. So, there was no denying that was a problem.

I don’t remember a specific moment when I thought, ‘This is no good.’ But I do remember, as I got to be 18, 19, 20 and the friends that I was hanging out with, we started doing things that I knew were wrong, like partying all the time. The partying just turned into harder and harder drugs and experiences and doing scarier things that I knew were wrong—that were so wrong. And as I started, not just experimenting with these drugs and these people, I knew that I didn’t feel happy at all. It just felt hollow. I felt a disconnect. I knew that I had disconnected from the Spirit that I had felt in my life. It was gone. And I could feel it. I could feel that it was gone.

And eventually I started going to different rehabs and went to jail a few times. Nothing changed in my life because I wasn’t ready, maybe? I thought I was because I thought I was trying to stop. But there was something that wasn’t connecting with my efforts. I believe that it didn’t actually work because I wasn’t honest about how it was really affecting my life. I wasn’t honest about how . . . I think I just thought that it was only hurting me and that I could stop if I wanted to. When I really wanted to, I could just stop and that it wouldn’t be that big of a deal. But I couldn’t stop.

I remember one night I was in my room and I was sitting there using some drugs and I remember thinking, ‘This needs to stop.’ And I remember saying a prayer, “Please, help me stop this, please.” And that was the most sincere I really asked for help, like ever. Then the next day, I went to jail. God was answering my prayer and getting me away from all the things that I wanted to be free of. So, He put me away and free from being able to get to those things.

► You may also like: How a girl at a lemonade stand answered an addict’s prayer in the most unexpected of ways

I remember sitting in the jail cell, and it must be a scripture mastery scripture, but I remember the thought, “Experiment on my word.” And I remember that thought repeating in my head. So, I asked the officer in the jail if I could get a Book of Mormon to read. And I started reading the Book of Mormon every day. Eventually, I started to feel the Spirit again. It was something that I missed, like so much. It was so great to feel it again.

After I got released from jail, I committed to reading my scriptures every day. I just decided to see what happens if you just read it every day—just see what happens. And the first thing that fell away was my shoplifting. I realized that I didn’t want to do it anymore. There was no desire to put that Chapstick or gum in my purse anymore. I remember walking out of stores and feeling so good that I could leave the store without being nervous that I was going to be caught. For the first time in years, I could leave stores and not be nervous that there was going to be somebody chasing me down. I knew that it was because I was reading my Book of Mormon and so I knew that if I just kept reading, things just got to continue to get better.

I think with the scriptures, there’s power in the words. I reflect on how God created words. And by reading, and visualizing, and thinking about the words, there’s a power there that is a gift from God if we want to tap into it—if we really have the desire and the commitment to tap into the opportunity of the scriptures and the words in it.

I started going back to church, and I met up with a bishop. It was really kind of hard to tell him everything. But then it also felt really good to just tell him—to just get it off my chest. And he suggested some things that I should do. I don’t remember specifically what he advised, but I do remember that I also committed to pay my tithing and be faithful with that, and to come to church regularly, and make sure to just be honest in everything that I say. I felt like he didn’t judge me and so maybe I’m not as bad as I feel like I should feel. I just remember leaving my bishop’s office feeling really good. It gave me hope . . . gave me hope.

► You may also like: The connection I feel to the unnamed women in the Book of Mormon

I started hanging around with my family. They became my best friends. I know that they are the biggest support and strength for me, and being around them strengthened me more than any of the treatment centers I went to, even though they did help teach me some things to avoid or . . . I just feel like being with my family, and their joy, and their love, and their righteousness was one of the biggest strengths for me.

During all of my distancing from my family and parents, they always invited me home. They always opened their door to me and invited me to family things. And when I was there, they always showed love and never judgment. So, I always knew that they were there for me. I really want to tell parents when they have kids that are astray and they wonder if they should just block them out, block them off until they decide to change their ways, I want them to know . . . knowing that my family was there no matter what, gave me something to come back to when I was ready. And I think if they turned their backs on me, I would have turned my back on me too. I would have given up.

To me now, an honest life looks like being able to be who I really am, and have fun sharing myself with my family and my friends and being free of any worry of what I’ve said, or what people think of me. If I’m honest, I know I have nothing to hide. And that is such a good feeling.

► You may also like: From the wife of a pain med addict: 9 tips for families experiencing addiction