Elders Bednar, Cook + 3 Other Apostles Whose Family Life Was Not Picture Perfect

Not everyone grows up in an "ideal" family situation. Death, war, financial insecurity, divorce, Church inactivity, there are many circumstances that can shake a family to its core and try each family member's testimony. No one is entirely immune to difficult family situations like these, including the general authorities of the Church.

Though faced with overwhelming hardships and challenges, these general authorities gained a stronger testimony of the Savior and the importance of families while overcoming incredibly trying family situations.

Before Elder Dallin H. Oaks was 8 years old, his father passed away from tuberculosis, leaving his mother, Stella H. Oaks, to care for three children on her own. To help provide for her family, Elder Oaks's mother went to New York to continue her education while Elder Oaks and his siblings stayed with their grandparents.

After two months of separation from her children following the death of her husband, Elder Oaks's mother suffered a nervous breakdown from which "she was told she would never recover" (Elder Dallin H. Oaks, "LDS Leaders and Mental Illness," Mormon Channel). 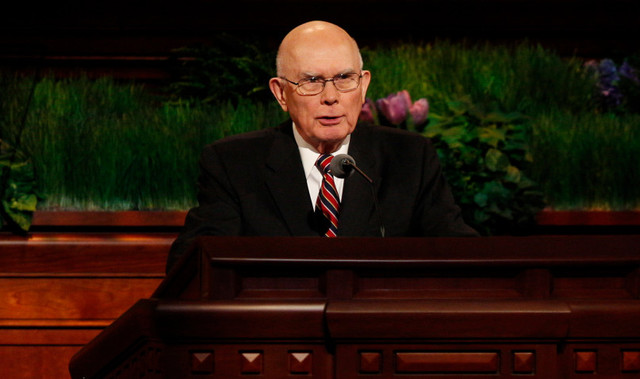 However, Elder Oaks says, through "the blessings of the Lord, she did recover and she was stronger than ever" (Elder Dallin H. Oaks, "LDS Leaders and Mental Illness," Mormon Channel).

Elder Oaks's mother worked hard for her family and cultivated that same work ethic in her children. When Elder Oaks was about 11 years old, he took a small job sweeping the floor of a radio repair shop, eventually working his way to radio engineer and announcer in his late teens.

Throughout his life, Elder Oaks admired his mother's fortitude and ability to raise her children in the gospel. After her death, Elder Oaks's mother was remembered for her civic and Church service.

President Dieter F. Uchtdorf was just 4 years old the first time his family fled their home, leaving everything behind.

It was during WWII, and President Uchtdorf's family was no longer safe in Czechoslovakia. With his father serving as a soldier in the war, President Uchtdorf's mother was left alone to transport her four children via a refugee train heading west to Germany during the winter. It was a journey that almost ended in disaster.

"The train stopped, my mother went out and tried to get food," President Uchtdorf told KUTV. "When she tried to find the train, the train was gone with her four children in there." 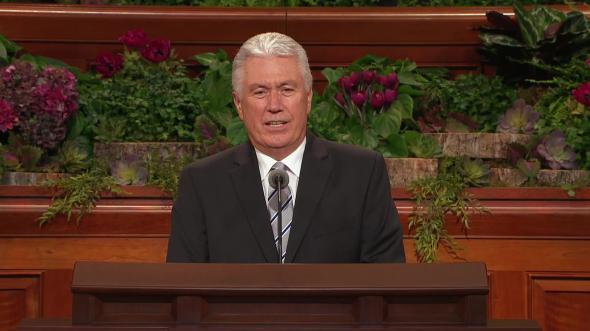 At the age of 11, President Uchtdorf watched as his family split up, each taking separate routes to Frankfurt until only he and his mother remained. Together, they made the harrowing journey past Russian guards patrolling the border to West Germany until they were safely reunited with the rest of President Uchtdorf's family.

But these challenges only worked to strengthen President Uchtdorf's testimony of the gospel and family.

"It is no wonder that President Uchtdorf feels so passionately about the sacred institution of the family. With great sincerity he testifies that the family is ordained of God. Family is of utmost importance to him. It was within his family that the seeds of his powerful faith were sown and nurtured. There he began to prepare for the fulfillment of his foreordination as a priesthood leader in the Church of God" (President Russell M. Nelson, "President Dieter F. Uchtdorf: A Family Man, a Man of Faith, a Man Foreordained", lds.org).

Though Elder David A. Bednar's father was not baptized until later in life, he was very supportive of his wife and children attending Church meetings.

In fact, Elder Bednar said in his April 2012 general conference talk that some members in his ward did not know his father was not a member because he regularly attending Church meetings with his family and helped with various Church activities. 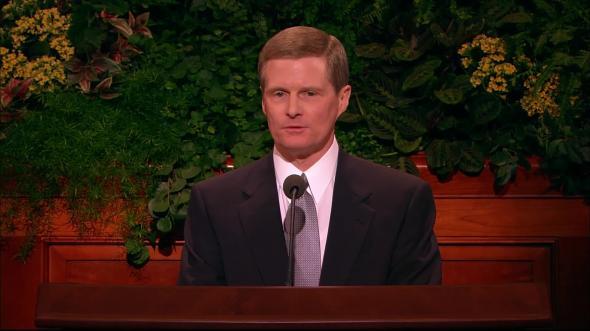 Throughout his childhood, Elder Bednar would ask his father several times a week why he was not baptized.

"He responded lovingly but firmly each time I pestered him: 'David, I am not going to join the Church for your mother, for you, or for anyone else. I will join the Church when I know it is the right thing to do'" (Elder David A. Bednar, "The Powers of Heaven," lds.org).

Even while serving his mission, Elder Bednar would end his letters with "Dad, I love you. When are you going to be baptized?" and continued to pray that one day his father would be baptized and his family would be sealed in the temple.

However, it wasn't until years after Elder Bednar's mission and after he was married that his he received an answer to the question he had been asking his father all those years when his father called him to ask, "What are you doing this Saturday? I need you home to baptize me."

"We always talk about fathers blessing their children and performing the ordinances, and those are wonderful experiences. But I've had the experience of providing all those ordinances for my dad," Elder Bednar said, years after his family was sealed for eternity in the temple.

Elder Quentin L. Cook said growing up he learned how to trust the Lord from his mother, Bernice Kimball Cook, and how to set and achieve goals from his father, J. Vernon Cook. And when he was 15 years old, Elder Cook experienced something that would draw from both lessons. 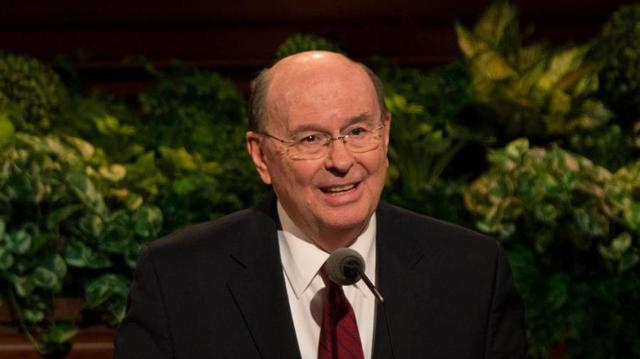 At the time, Elder Cook's father was a less-active member and thought Elder Cook's older brother, Joe, should pursue a career in the medical field instead of serving a mission.

Elder Cook and his brother deeply respected their father and decided to talk about their father's advice.

In a remarkable discussion with my brother, who was five years older and led the discussion, we concluded that his decision on whether to serve a mission depended on three issues: (1) Was Jesus Christ divine? (2) Was the Book of Mormon true? (3) Was Joseph Smith the prophet of the Restoration?

As I prayed sincerely that night, the Spirit confirmed to me the truth of all three questions. I also came to understand that almost every decision I would make for the rest of my life would be based on the answers to those three questions. I particularly realized that faith in the Lord Jesus Christ was essential. In looking back, I recognize that, primarily because of my mother, the foundations were in place for me to receive the spiritual confirmation that evening ( Elder Quentin L. Cook, "Foundations of Faith," April 2017 general conference).

The next morning, Joe approached his father and bore his testimony, earning his father's support to serve a mission. But this experience also had a profound effect on Elder Cook and "any doubts he had were swept away forever."

Elder Cook also served a mission from 1960 to 1962, serving in the British Mission with Elder Jeffrey R. Holland as one of his companions.

Later, Elder Cook would be called to serve as a counselor to his brother Joe, who was serving as the stake president at the time.

Of his parents, Elder Cook would later say they "loved the Savior. They did everything they could to raise us the right way" (Elder Jeffrey R. Holland, "Elder Quentin L. Cook: A Willing Heart and Mind", April 2008 Ensign).

Growing up, Elder Richard G. Scott's mother was a less-active member and his father did not belong to the Church.

As a youth, Elder Scott would attend Church occasionally with friends or with the encouragement of home teachers and bishops.

By the time he was 22 years old, Elder Scott had not really considered serving a mission, until he met Jeanene Watkins. As the two started dating, Jeanene told Elder Scott, “When I marry, it will be in the temple to a returned missionary.” 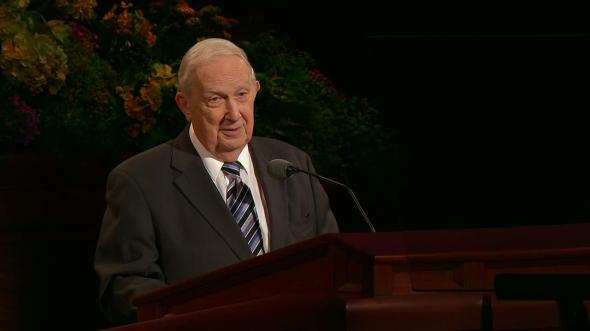 After personal reflection and prayer, Elder Scott felt impressed that he should serve a mission and was called to serve in Uruguay from 1950 to 1953.

Two weeks after he returned from his mission, Elder Scott and Jeanene were sealed in the Manti Utah Temple.

However, the couple experienced tragedy about five years after their marriage. Their third child, a baby girl, passed away at birth and their second child, a two-year-old boy, died six weeks later following a surgery to correct a congenital heart defect.

Elder Scott's father, who was not a member at the time, was particularly fond of his 2-year-old grandson and was heartbroken at his passing. Yet when he observed Elder Scott and his wife, he noticed they seemed to have a sense of peace that he did not.

"He said to my inactive mother, ‘I cannot understand how Richard and Jeanene seem to be able to accept the loss of these children.’

“Mother, responding to a prompting, said, ‘Kenneth, they have been sealed in the temple. They know that their children will be with them in the eternities if they live righteously. But you and I will not have our five sons because we have not made those covenants.’

Elder Scott's parents would later serve in the Washington DC Temple for many years, and Elder Scott served as an apostle until he passed away Septemeber 22, 2015.

Elder David S. Baxter, a general authority of the Seventy, found the gospel at a critical time in his life.

When he was 5 years old, Elder Baxter's mother and father divorced. His mother remarried, but Elder Baxter's stepfather was "not a good man" and times were difficult (Elder David S. Baxter, "Finding Hope in a Troubled Family," August 2015 "New Era").

For most of my childhood and teenage years, my mother raised us on her own in poor circumstances. Money was carefully rationed. She coped with an inner loneliness, desperate at times for support and companionship. Yet despite all of this, there was a dignity about my mother, a tremendous source of determination and sheer Scottish grit (Elder David S. Baxter "Faith, Fortitude, Fulfillment: A Message to Single Parents", April 2012 general conference).

When he was 12 years old, the missionaries began visiting Elder Baxter and his family, bringing a sense of goodness and peace into their home. Before his 13th birthday, Elder Baxter was baptized and received the Aaronic priesthood. However, Elder Baxter's family situation was still difficult.

"Our life didn’t suddenly change. We still had difficulties—of course we did. My mother married another bad man, an alcoholic, so there were still hard days and harsh times. But I now had an entirely different sense about the future. The gospel allowed me to rise above my challenges and feel abiding peace" (Elder David S. Baxter, "Finding Hope in a Troubled Family", August 2015 "New Era").

When he was 15 years old, Elder Baxter says he looked back on the challenges his family faced in his younger years—alcoholism, divorce, poverty—all of the things he couldn't change in his past and decided, "I will change the future—for myself and for the children I will someday have. My unhappy family history will not be passed on" (Elder David S. Baxter, "Finding Hope in a Troubled Family," August 2015 New Era).

He married his wife, Dianne Marie Lewars, and has four children. His mother also remarried and was sealed in the London England Temple. Elder Baxter says his mother was "happy, content, and fulfilled until overtaken by mortality" during her marriage for nearly 25 years until she passed away.