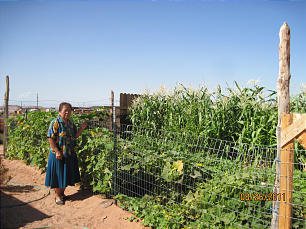 Brother Christensen, recently retired director of the Ezra Taft Benson Agriculture and Food Institute, went with his then-colleague Richard Brimhall to meet with President Justice and some of his priesthood leaders in March of 2009, and it was decided that they would do a comprehensive demonstration garden at the Tuba City Arizona Stake Center.

In the demonstration garden they planted corn, squash, beans, peppers, raspberry bushes, grape vines, fruit trees and just about anything else they could because they needed to spend some time working with the soil.