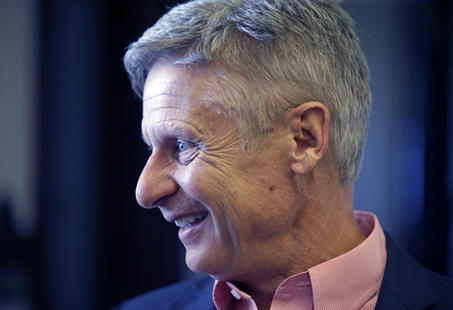 Gary Johnson Clarifies & Shares What He Really Thinks About Mormons

Gary Johnson recently wrote an exclusive article for the Deseret News, during which he clarified and gave more context for some of his comments about Mormons. He shares, "In response to a question thrown at me while walking down a street (in the rain), I expressed my reservations [about religious liberty being twisted as a tool to discriminate] rather emphatically—and cited the experience of Mormons as a case-in-point where religious persecution resulted in violent episodes right here in America.
"My point was that even a respected, peaceful people experienced tragic harm in the name of religion and was, in fact, persecuted by the government itself by politicians who opposed their beliefs and practices."

A few days ago, trying to maneuver through a “scrum” of reporters in Philadelphia, I was asked about my views regarding religious freedom and non-discrimination laws.

Given the divisiveness and pain that have accompanied several state religious freedom laws, I approach attempts at legislating religious exceptions to anti-discrimination laws with great sensitivity and care.

Religious beliefs have played a vital role in forming America’s character, as well as my own. I was raised as a Lutheran, and I believe in God and consider my faith and involvement with organized religion to be an important part of who I am.

Mormon Life PoliticsPolitics,Mormon Life
Comments and feedback can be sent to feedback@ldsliving.com