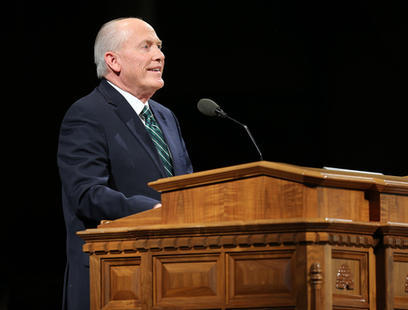 General Authority: Differing Accounts of the First Vision Make It the "Best-Documented in History"

"Some have mistakenly argued that any variation in the retelling of the story [of the First Vision] is evidence of fabrication," said Elder Richard J. Maynes, of the Presidency of the Seventy. "To the contrary, the rich historical record enables us to learn more about this remarkable event than we could if they were less well-documented. . .

“Joseph wrote or dictated four known accounts of his First Vision. Additionally, his contemporaries recorded their memories of what they heard Joseph say about the vision; five such accounts are known. It is a blessing to have these records. They make Joseph’s First Vision the best-documented vision in history."

“The Restoration of the fullness of the gospel of Jesus Christ in the latter days has been foreseen and predicted by prophets throughout history,” said Elder Richard J. Maynes of the Presidency of the Seventy for The Church of Jesus Christ of Latter-day Saints during a Worldwide Devotional for Young Adults on Sunday night.

Thousands of young adults—ages 18 to 30—from around the world tuned in for the live broadcast originating from the Tabernacle on Temple Square in downtown Salt Lake City. Elder Maynes’ wife, Sister Nancy J. Maynes, shared brief remarks, and a young adult choir comprised of students from the Orem Institute of Religion and high school seniors throughout Utah Valley provided musical selections during the broadcast.

Speaking on the topic, “The Truth Restored,” Elder Maynes focused his remarks on the Restoration of the gospel of Jesus Christ through the First Vision experience of LDS Prophet Joseph Smith.