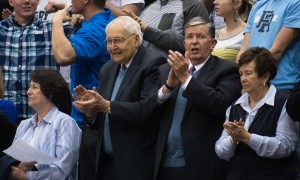 Prospective BYU president Kevin J Worthen is a sports fan. In his vice presidency at BYU, Worthen took a special interest in BYU athletics and could often be seen at President Samuelson’s side at sporting events.

Worthen graduated from The College of Eastern Utah, where he was the co-captain of the basketball team. After graduating from law school at BYU, Worthen returned to Provo, where he served for four years as the faculty athletic representative to the NCAA and for eight years as the chair of the University Athletic Advisory Council.