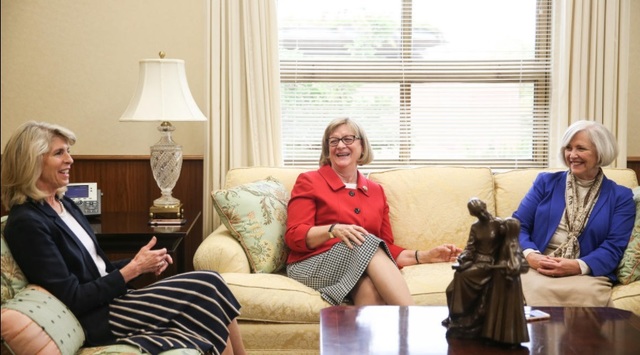 "We've All Wept and Pleaded, Help This Be Useful": General YW Leaders Honestly Talk the Pressures and Beautiful Guidance of Giving a Conference Talk

Recently, members of the Young Women general presidency sat together for an interview with the Deseret News during which they discussed the messages given by women that have been the most impactful in their lives. During that interview, they shared very honest but beautiful insights into what it is like giving a talk in general conference.

“We’ve all done this, knelt by our desk in our office, closed the door and just wept and asked and pleaded, ‘Heavenly Father, please help this be useful to somebody. I don’t want to waste these 11 minutes you’ve given me. Just make it worth its while for someone who is going to be listening,’ and that’s all we want,” Sister Neill F. Marriott, second counselor in the Young Women general presidency, said. “We’re not there to entertain. We’re not there to get attention … we just want to do things His way.”

They seek the Lord’s reassurance in knowing that what they have prepared is what God would have them share and eventually, Sister Carol F. McConkie, first counselor in the Young Women general presidency, said they gratefully receive an affirmation that they’ve finally arrived at the talk they are supposed to deliver.

“Otherwise, you’re just too vulnerable to turn in a talk that’s supposed to represent His words to the world,” Sister McConkie said. “You can’t do it, and to receive that affirmation is such a sweet experience.”