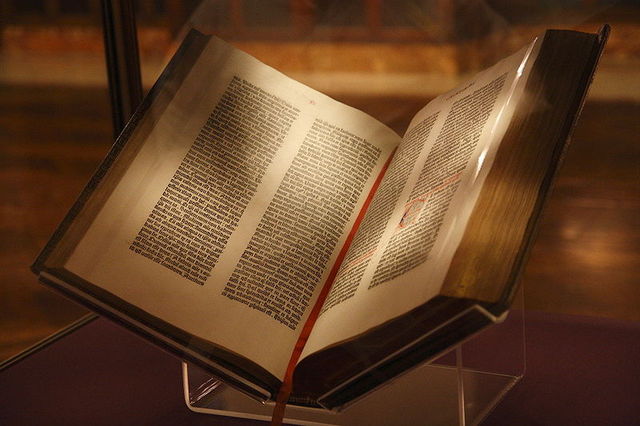 Would you like to see the first book in the world ever printed on the Gutenberg Press? It was a Bible! Prior to Gutenberg’s press it took months (or years) to produce a single copy of the Bible or any other book. Without the invention of “movable metal type” and the development of European paper mills, it is doubtful there would have been a successful outcome of the Protestant Reformation or an age of enlightenment. In a manner of a few years there were more than 2,500 Gutenberg type presses in every major town in Europe. Between 1450 A.D. and 1500 A.D. there were more than 15,000,000 books printed.

The first Gutenberg Bible came to the United States in 1847. It became part of the collection of James Lenox, the 19th-century book lover. It was the Lenox’s great library that formed the bases upon which the New York Public Library was built. That very copy can be seen today in the New York Public Library. There is a tradition that when the first Gutenberg Bible arrived in New York that the European agent said to the officers at the Customs House “Gentlemen,please remove your hats!” before they could see a copy of the first book to be printed upon a Gutenberg Press.

The honor and privilege of viewing a Gutenberg Bible is still a special experience for those who love and appreciate knowledge. Johann Gutenberg‘s, given name was “Henne Gansfleisch zur Laden.” He invented the first printing press in the 1440s A.D. The first book ever to be printed upon his press was the Bible in Latin. Forty-eight copies are known to have survived, but of these only twenty-one are complete. Twelve of the surviving copies were printed on vellum [calf skin] with only four of the existing copies being complete editions. The other surviving Gutenberg Bibles were printed on paper. There were only a total of about 180 copies originally produced, including about forty-five on vellum.

John L. Lund is an educator traveling the world with Fun for Less Tours.