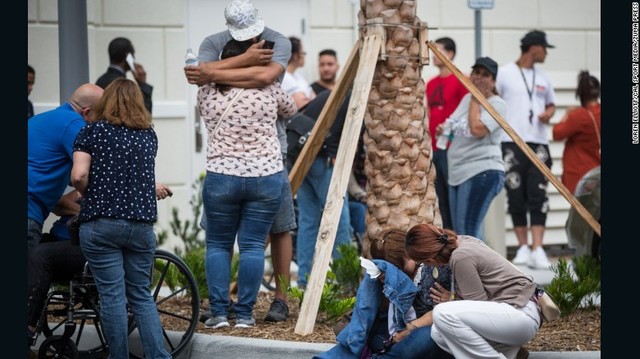 Following the Florida terrorist shooting that killed 49 and injured another 53 at a gay nightclub in Orlando, many have reacted with misunderstanding and sometimes even hatred in knee-jerk reactions motivated entirely by fear.

And it's easy to see why fear and confusion are natural responses: we just experienced the deadliest shooting in United States history, not to mention the worst terror attack since 9/11.

Memories and recent international headlines fill our minds, reminding us of dark days. But, in response to such fear and terror, there is only one response that can drown out all the rest: love, especially that of the pure, healing love found in our Savior and Heavenly Father.

Glenn Beck recently posted such a response on Facebook shortly after the attack:

Isis should know, if you try to kill our LBGT brothers and sisters, you will need to come through us all.

We will be a shelter and fierce defender of the rights of all mankind.
We will always put our differences aside when push comes to shove. When someone tries to silence, cause fear or kill - we will unite and stand against you.

Today the colors of the rainbow blend into one bright white light.

‪#‎LBGT‬ we stand with you!

President Gordon B. Hinckley spoke of such times shortly after 9/11, reminding us to not allow hatred and fear to spread:

Now, all of us know that war, contention, hatred, suffering of the worst kind are not new. The conflict we see today is but another expression of the conflict that began with the War in Heaven. . . .

The terrible forces of evil must be confronted and held accountable for their actions. This is not a matter of Christian against Muslim. . . . We value our Muslim neighbors across the world and hope that those who live by the tenets of their faith will not suffer. I ask particularly that our own people do not become a party in any way to the persecution of the innocent. Rather, let us be friendly and helpful, protective and supportive. It is the terrorist organizations that must be ferreted out and brought down.

We should never seek to find purpose in suffering by blaming those who are innocent, especially those who are victims of such terrible crime. President Gordon B. Hinckley also told us, "People inquire about our position on those who consider themselves so-called gays and lesbians. My response is that we love them as sons and daughters of God.”

In addition, Elder Quentin L. Cook has said, “As a church, nobody should be more loving and compassionate. Let us be at the forefront in terms of expressing love, compassion and outreach. Let’s not have families exclude or be disrespectful of those who choose a different lifestyle as a result of their feelings about their own gender.”

Though our hearts bleed and break when this kind of destruction and suffering occurs, sometimes it gives us the added motivation we need to look past our differences to find new ways to serve and to love. Sometimes it takes the blackness for us to realize the difference Christ's pure light brings into our life.