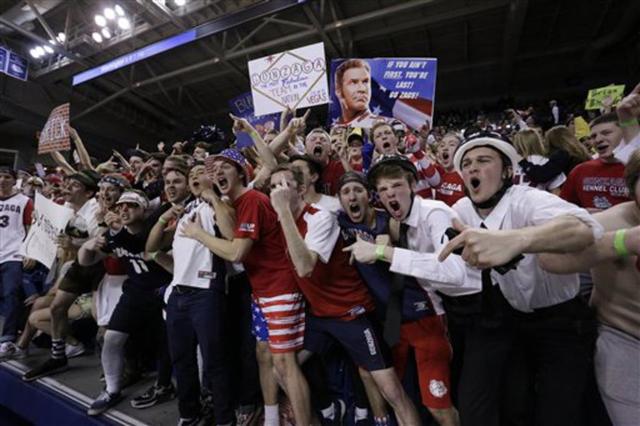 It's pretty normal at a college basketball game for fans to jeer at the opposing team. But when jeers cross the line, it's not so normal for a fan to defend the opposing team that just won the game.

In a letter to the editor of The Gonzaga Bulletin, a student chastised the student body of Gonzaga University, a Roman Catholic private college, for how they treated BYU students and fans before, during, and after the game following BYU's historic upset last Saturday.

"We lost in more ways than one Saturday night," Gonzaga senior Joseph Harshbarger wrote. "Not only was BYU’s final score higher than the Zags’, but some students showed an ugly, hidden side of the Gonzaga student body that includes using religion as a means of criticism."

Harshbarger described how Gonzaga fans purposely dressed "un-Mormon" and as stereotypical LDS missionaries during the game while using derogatory comments to "shake the opposing players" because they were Mormon. Harshbarger then noted how this turned what should have been a basketball game into a "sort of religious crusade: Catholics vs. Mormons."

"Did this really help the Zags win?" he asked his fellow students.

Harshbarger also pointed out that though the Mormon religion may seem different or strange to some, to others, Catholicism could also seem different and the students' behavior at the game went against Gonzaga's mission statement to "foster a mature commitment to dignity of the human person, social justice, diversity [and] intercultural competence."

"Our country is facing a period of religious intolerance," Harshbarger wrote. "We as young people have the duty to show the world that difference must and should be celebrated. Sports offer a wonderful opportunity for players to shed their national and religious identities and to join together and play. Why do we as GU students feel entitled to mock and criticize the religion of other players?"