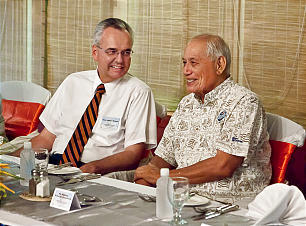 "I know first-hand about the diversity in this region because I have visited much of it," Elder James J. Hamula of the Seventy told delegates at the first Managing Religious and Cultural Diversity in the Pacific conference held recently at the National University of Samoa in Apia.

Elder Hamula, who is president of the Church's Pacific Area, continued: "We have congregations in 22 different countries or territories in the region and operate in 14 different language groups. Of the nearly 35,000,000 people in the region, 500,000 are Mormons (as others call us) or Latter-day Saints (as we call ourselves). In this region, this fact makes us a minority relative to the total population, although the degree of our minority status varies from place to place. In Tonga and Samoa, for instance, our percentage is 45 percent and 30 percent of the total population, respectively. By contrast, in Australia and New Zealand, our percentage is about 1 percent.