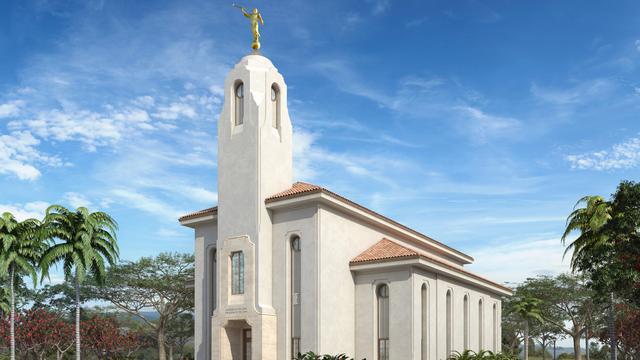 On Saturday, April 9, 2016, hundreds gathered in Durban, South Africa, as ground was broken for a new temple.

The presidency of the Church's Africa Southeast Area and their wives attended the event, with the area president, Elder Carl B. Cook of the Seventy, performing the groundbreaking.

Announced in 2011, the Durban South Africa Temple will be the second temple in the country following the Johanasberg South Africa Temple dedicated in 1985. Currently, there are 150 operating temples worldwide, with three completed in Africa (Aba, Nigeria; Accra, Ghana; and Johannesburg, South Africa), one under construction (Kinshasa, Democratic Republic of the Congo) and three more announced, including one announced just a few weeks ago in general conference (Abidjan, Ivory Coast; Durban, South Africa; and Harare, Zimbabwe).

"Today the ceremonial shovels will turn the soil, and the construction of the temple will begin,” said Elder Cook at the groundbreaking.  “We can likewise begin building.  We can build our personal lives in preparation for the temple.  Today we can increase our faith, we can increase our obedience to God, and serve Him more fully.”

To learn more about this new temple, visit Mormon Newsroom or Mormontemples.org.

Lead image a rendering of the Durban South Africa temple from Mormon Newsroom.