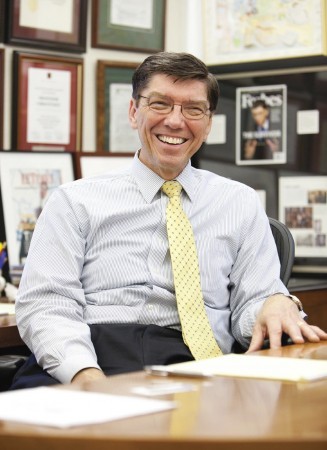 Harvard Magazine: Clayton M. Christensen on His Mormonism and Mortality

Born in Salt Lake City, Clayton M. Christensen grew up in a Mormon family and served as a missionary in South Korea from 1971 to 1973; he speaks fluent Korean. He earned a summa cum laude degree in economics from Brigham Young University, then attended Queen’s College, Oxford, as a Rhodes Scholar, where he received an M.Phil. in applied econometrics and played some basketball, as he had in college. (He stands six feet, eight inches, and remarks, “I’d rather play basketball than eat.” His six-foot, 10-inch son Matt played on the 2001 NCAA championship team at Duke.) Christensen was a Baker Scholar (a top academic honor) at Harvard Business School, and became a White House Fellow in 1982, serving as an assistant to secretaries of transportation Drew Lewis and Elizabeth Dole.

He and his wife, Christine, have raised their five children in a reverently Mormon household. In 1999 he wrote a short essay, “Why I Belong and Why I Believe,” as a gift to his children; it appears under the “Beliefs” section of his website, www.claytonchristensen.com. There, he writes that the mechanism by which the Church of Jesus Christ of Latter-Day Saints has helped him understand and practice the essence of Christianity is “to have no professional clergy. We don’t hire ministers or priests to teach and care for us. This forces us to teach and care for each other—and in my view, this is the core of Christian living as Christ taught it.” He describes the many ways daily life offers him opportunities to serve others, whether it be helping unload someone’s moving van or visiting an elderly couple, in poor health and struggling with alcoholism, who lived in a dilapidated apartment in a rough part of Boston.

Read the rest of this story at harvardmagazine.com