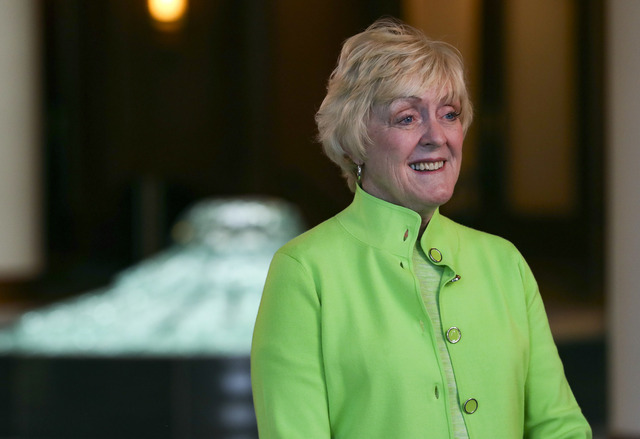 Having one child ‘all the way home’: How a doctor’s words to Heidi Swinton following her newborn’s death changed her life

Heidi Swinton was a young journalist with big dreams when she felt led to start a family, but five years passed and she and her husband still had no children.

“It’s the ‘sit in the back of the chapel fast day and have people bless their babies and tell everyone how blessed they are and you're not one of them,’” Swinton recalls. “That was a real challenge for me. It was a challenge, I think, for me to commit to the Lord.”

Eventually, she was able to give birth to twins, but one of them passed away after just 22 hours. Swinton says almost all of her spiritual experiences since then can be traced back to burying her son Christian. On this week’s episode of All In, Swinton shares one doctor’s words that shaped the way she raised her family and lived her life from then on.

Morgan Jones: Heidi, how old were you when you decided or thought that you might want to pursue a career in journalism?

Heidi Swinton: You know, I was editor of The Chronicle at the University of Utah, which is a very dubious claim to fame. I was studying English and getting a major in English, thinking I would be an English teacher because everybody in my era went into teaching. And because I was there at The Chronicle, I couldn't do the student teaching because I couldn't be gone. So I decided, “Well, I guess I won't do that.” Short-sightedly I said, "I guess I'll become a journalist!" Because that's what I'm really good at. So I got my foundation in The Chronicle office, I started to write there seriously. I was always a writer on newspapers. I was the editor at my high school, in my junior high, and I mean it was in my blood. But when I was in college, I found that I loved observation. I loved stepping back and observing what was happening and then describing it in such a way that it was fair and honest. But it gave me a glimpse into so many different aspects of life. And that's what journalism did. So I went on to graduate school in journalism, expecting—wanting desperately, to be the editor of Newsweek magazine. That was my goal in life. And before I went away, I was sitting one day, and I was reading a magazine, and all of a sudden, into my mind came words. Now some people have spiritual impressions in different ways. My husband gets the tingles. Some people get a burning, other people—I hear words, and I think it's because I'm a word person. But the words came to me as I was thinking about going away and becoming this very famous writer: "That's the way the adversary gets to people like you. He leads them away from the work of the Lord." And I was just, "Where did that come from?" And I called up my mother who was at work, of course, and told her about it. She said, "Well, write that down in the front of your scriptures. What do you think the Lord wants you to do?" I said, "I don't know." The next day I got my car and went to graduate school, not listening at all to what the prompting was. I was there a few months, realized I'd done the wrong thing. It didn't ever feel right to be going the direction I was going, and yet I was a journalist to the core. So it was an inconsistency on my part. But I chose to not pursue it.

I carried myself forward, came home, got married, wanted to have a family, and then five years later, still hadn't had any children. So you know, it's the, “Sit in the back of the chapel fast day and have people bless their babies and tell everyone how blessed they are and you're not one of them.” That was a real challenge for me. It was a challenge, I think, for me to commit to the Lord—that even though what I anticipated wasn't happening, that I was there for Him. And I was there with Him because I've made a choice, following the prompting that I had received earlier. We eventually had children. We had a series of miscarriages, but our first children that were born were twin boys, and the oldest would live 22 hours. And I can remember standing by his graveside and thinking, "How does this happen? How, how does a righteous desire of your heart become so fractured? Here I am in a cemetery burying a child that I wanted so desperately and wanting the child who was in the hospital fighting for his life to make it.” And I can remember committing to the Lord, if He'd stay with me and stay with my son Cameron and help him live, that I was going to be there. I was going to do what I'd been asked and I was going to be faithful and strong and diligent and valiant. That I was making a covenant at that very sacred spot in my life. And Cameron lived. Cameron is now a doctor for newborn intensive care children just like he was after three months in the hospital. But it changed my life. That was the point when the journalist in me gave way to essentially a child of God, where I had to do what it says in the Doctrine and Covenants 25, "Lay aside the things of the world and seek for the things of a better." And that's what happened. And I can count almost every experience, spiritually, from that moment of burying that child. That's the marker on my forehead. That the Lord said, "You can be cynical and angry and walk away like some people might, or you can choose to follow me." And I can remember walking into church a month after this had happened, and I hadn't been back. I didn't have Cameron, he was in the hospital still. And they were singing— I walked in late so I wouldn't have to talk to anybody, and they were singing "Come, Come Ye Saints." And I remember the verse, "And should we die, before our journey's through, happy day, all is well." That stayed with me. It further submitted to me this was no accident that they were singing that, this was the Lord saying, "Happy day, all is well."

Just one other thought on that. Here's the journalist—no longer a journalist, though I was doing writing. I came home and became the PR director for the Utah Symphony. So I did some writing. But there was a point in my life where my husband and I looked at each other and said, "This is the way it's going to be." The doctor had walked into my room right after he'd heard that the baby had died. His name was Christian. And he pulled up a chair, I can still remember hearing it squeak across the linoleum floor and sat down next to me and took my hand. And he said, “There will come times in your life with your family gathered around you that you will be so grateful. You have one all the way home.” That “all the way home” concept resonated with me. I have one all the way home. Suddenly, sealing in the temple, and "families are forever," and the next life, and the veil being thin—all of those things are real to me and have become kind of the measure of how we've raised our children. So that's a long answer to how does the journalist end up writing a biography of the prophet of God. Can you imagine if all I did was write news articles? But it just came into my life. And there it was. Such a blessing.

Morgan Jones: I love what you talked about having one all the way home. You've talked a bit about that, about how that experience of losing that baby focused your family on eternity. My mom's oldest sister passed away after a couple of days. And I've seen that a little bit, I think my mom has been that way. Like, she's always talked about that sister and always been like, "I can't wait to meet her and I look forward to that," and that's kind of, like, a focus. And so for your family, what has that looked like in the practice of focusing on eternity?

► You may also like: Finding hope: When babies return to their heavenly home before ever coming to their earthly one

Heidi Swinton: Well, we do all the things you would expect, you know, we've been up to the grave to make it real, this is all we have. And we've done that. But we talk about him all the time. We talked from the time they were very little when people would say, "How many children do you have?" I'd say “I have five.” And my sons would know to say, "Yeah, there are four here, but one's already gone all the way home." We'd have family home evening. And as we talked about eternal life and living with our Father in Heaven and being a family, we could talk about what that really means, because we've got an identical twin brother in heaven, who looks just like that oldest boy who's here. And we would talk about that when our children were married, one of my sons said, "I didn't know where to take the invitation to the wedding, so I just took it up to his grave." I can remember sitting in sacrament meeting when our oldest son passed the sacrament for the first time and seeing two boys. And in my mind, knowing that what's important is that righteous opportunity to bring everybody back together again. So that afternoon, we're sitting around the dinner table, I told them what it felt like for me to see in my mind's eye, two boys who look just alike, passing the sacrament together for the first time. And the same for going on missions. And the same for hard times. Sometimes I would sit down with a child who was really struggling with something. And I would say, "You know, we don't have the answers to all these things. But what we do know, is that the Lord has been there for each one of us. He was there to take Christian all the way home," and say, "Now you've got someone to follow. Now you've got an older brother in this family that you're going to connect to." I would always bring him into discussions because it made it so real for me, and that's all I had, you know, the relationship with him was the ways that we could draw upon the gospel and the teachings of the gospel to include him in the family. And we still do.