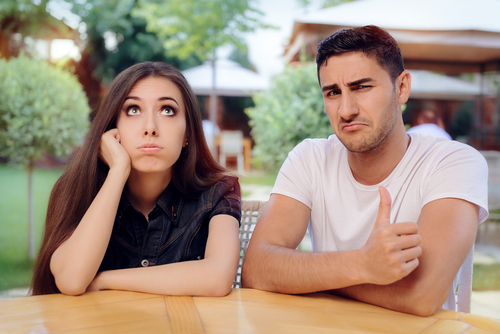 One time I had both my feet resting on the leg of the pew in front of me. I went to adjust my sitting position, and the whole pew moved and it jolted the person in front of me. Turns out he was sleeping, so he jumped when it happened. I tried so hard not to laugh.

A Happy End to a Dull Date

I introduced myself to a dude who was visiting our ward for the first time, just to be nice. We barely talked that day, but he friended me on Facebook after just that one meeting with him (although he did sit at the same table as me for a meal at the church after services). I thought it was a little weird, but I shrugged it off.

I thought he was a stick in the mud, and he thought I was standoffish.

Got a concussion the night before and was feeling great on the prescribed dose of pain pills, so I went to church. Well, it had to be fast Sunday. On these pain pills, the “Spirit” felt so strong! I needed to bear my testimony. In tears, I told my singles ward that I had converted the hit country star Brad Paisley.

The Dating Avoidance That Came Back to Bite

From Kassi Moyers:
I once met a group of guys at a bowling alley and lied to them about my name and number. The following Sunday, I stood for a new calling and was then approached by the same guys afterward who said, “I guess your name isn’t Sarah then, huh?” They didn’t think it was as funny as I did. 😂