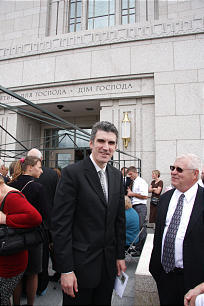 Historic moments for the Church in Ukraine

When Ivan Stratov received his call to serve in the Finland Helsinki East Mission he had no way of knowing he would become so much a part of Church history that his name would show up in the Deseret News Church Almanac.

In the 2010 edition, on page 593 under the heading "Ukraine," the first paragraph reads: "The first missionaries to enter Ukraine were Elders Ivan Stratov and Brian Bradbury; both were transferred from the Finland Helsinki East Mission. They were accompanied by President Dennis B. Neuenschwander of the Austria Vienna East Mission. They arrived on 7 October 1990 with a list of Ukrainian referrals. They quickly made enough contacts to gather 17 people for a fireside held in the Writers' Union Hall, where the first sacrament meetings were later held."

A second event in Church history in which Elder Stratov took part occurred on Sept. 12, 1991, as he stood among the 41 people gathered on a hillside in Kyiv (then spelled Kiev) overlooking the Dnieper River as Elder Boyd K. Packer of the Quorum of the Twelve offered a prayer of dedication on the land of Ukraine and blessings upon its people.