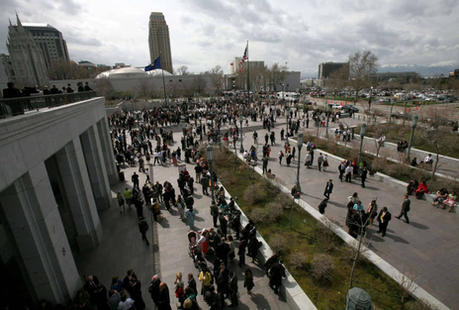 The Mormon church is preparing to blanket the globe with more missionaries than ever as a surge of young men and women pack their white shirts, ties and knee-length skirts.

The impact of The Church of Jesus Christ of Latter-day Saints' decision to lower the minimum age for missionaries is coming into focus eight months after church officials announced at a biannual conference that men could begin serving at 18, instead of 19, and women at 19, instead of 21.

Now, younger church members are joining older ones who were already planning on going on missions that are considered rites of passage and prepare many for future leadership roles within the church. More than 29,000 church members are expected to report in coming months, bringing the worldwide total of missionaries proselytizing and performing community service to an all-time high of 85,000 by this fall, new church estimates show.