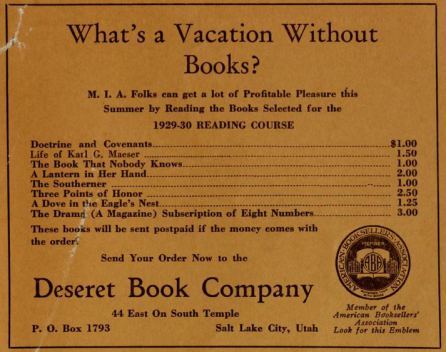 The 1929-30 Recommended Reading Course. Image via By Common Consent.

In the old days, a team of General Authorities would choose a list of “Reading List” books every year, and these would become part of the standard youth curriculum. Adults, too, would join in, and over time, there were books for adult classes as well as books for the youth. And the Church actively advertised, distributed, and endorsed these books. Some of them were Church books, but most of them were not. And a lot of them were, like, literature.

The list began in 1906, when the Improvement Era serialized Samuel Johnson’s Rasselas over four issues (Novemember 1906-February 1907) and encouraged everybody in the Church to read it. It went on regularly through 1944-45, and intermittently thereafter. Here is what I have been able to reconstruct (from manuals and magazine articles) of the books that, a hundred years ago, Latter-day Saints read as part of their religious duty. By way of preface I will simply say: we could do worse.

*Denotes a novel or work of fiction/imaginative literature

True to His Home, Hezekiah Butterworth (Biography of Benjamin Franklin)

The Strength of Being Clean, David Starr Jordan