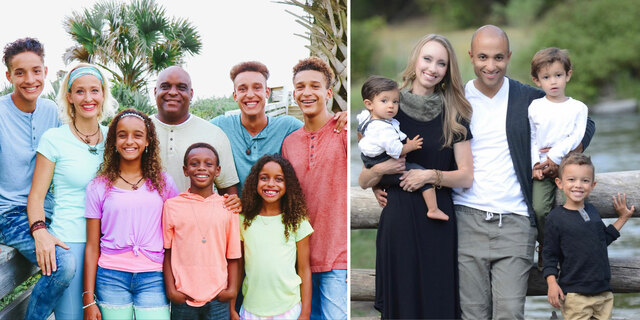 On this week’s episode of All In, Abe Mills and Stephen Jones, two black Latter-day Saints, share their experiences with racism within Church culture, the faith of those who came before them, and why they don’t hesitate to share their faith in Jesus Christ. They also took the opportunity to pay tribute to their own fathers who they consider to be pioneers of faith. Mills explained that sometimes black members of the Church are asked how they can continue to believe in the Church in light of its history, but he believes those asking should actually be asking a different question—a question inspired by the faith of his fathers.

Abe Mills: The question isn't, "How can I be a member of this Church?" The question is, how can people like your father, Stephen; and my father, and Darius Gray, and Elijah Abel, how could they join the Church before black people could hold the priesthood? And yet, their conviction was so strong, and their conviction and conversion were so personal with God, that they cannot deny it, and can't leave the Church. They can't leave it. Because even though people will be racist in the Church, they were not converted to the people, they were converted to the gospel.

Once they became converted to the gospel—I don't want to say it didn't matter what people did—but for them, they were going to withstand what people were doing and saying because they knew what God had in store for them. And so, I give a shout out to those men who are real pioneers. Elijah Abel was an actual pioneer that went across the plains, but your father, and my father, and Darius Gray—who was the leader of Genesis, the original leader of Genesis group—those are some real pioneers there. And I just have to give a shout out to them, because they taught me that's the question that you should be asking. How is it that those men stayed faithful in the Church with all of those things going on around them? And why would they do that if it wasn't true? That's the question that you should be asking. And so, when I ask myself the question in that way, I go, "Wow." I take my hat off to those guys, because you see what's going on now today, you say, "Well, that can't shake my faith." If what was going on then couldn't shake their faith, then what's going on now can't shake my faith.

Stephen Jones: You can't tell my dad that the Church isn't true. You can't.

Abe Mills: Right. Regardless of what he's seen and experienced. . . that's the way it was with my father as well.

Morgan Jones: I just want to say something really quick before we move on to the next question, and that is, I went when they did the "Be One" celebration—I was in the Conference Center. And they started talking about some of these people—Jane Manning James, Elijah Abel—and the people stood up. There was like a standing ovation. And I just remember thinking, that standing ovation was so overdue. So overdue. But I also think that like, I know that was you, Abe, trying to say, if my dad could handle this, then I have no room to talk. But I actually do think that you do have room to talk, and I think that we should also give hats off to our black brothers and sisters and recognize that, in order to be a faithful member of the Church, we all grapple with different things, but to be a black member of the Church, you have to look at the history and come to a point of believing, regardless. So, I just want to say, hats off to you. And you may want to cast that aside, but I just think that if we all recognize that a little bit more, then that would create a space for people to feel like, "They understand that this might be a hard thing, let's talk about it. They want to listen to my experience, let's talk about it."

Stephen Jones: I just want to say, I was able to play Elijah Abel in a movie that's not out yet, and it really gave me a completely different lens—just doing research and thinking about his character. People went through some hard things. And I think that the thing that comes to my mind is their stories. There are so many stories that have never been told. Like, you know, the popular ones, right? But the name of this movie is called Green Flake. Green Flake was a slave. There's not that much information about him, but there are countless stories like that, of trailblazers that came across the plains who were black, who were slaves, in some instances, that I feel like it was really interesting to learn all of that, but they're still available. I think that maybe we can tell more of those stories, because they are a part of our history. And I think people are scared to bring them up because of some of the pain from it, but these people's voices, their voices have not been heard at all.

Abe Mills: Hark Lay is one of them. I played Elijah Abel in I Am Jane. That was the first time I heard of Jane Manning James and man, how grateful are we that her story has been told, and Elijah Abel being a part of that story, and Anthony Stebbins, who was also with her, and like you said, Green Flake, Hark Lay. You start looking at these stories of pioneers who came across the plains, and Jane Manning James, I'm sorry I didn't bring her up earlier, but she stayed faithful to the Church until she passed away in Salt Lake City and is buried there. Yeah, I'm with you on that. And I hope you know, I'm sorry that it may sound like I was casting away, like if my father can do it, I can. I just feel like, what an example of true faith. But I do think that, like you said, I think that there is room for us to speak up. And I think that—I'm trying to remember the scripture, how it is when you teach and the person that's receiving and you can both be edified, you remember that?

Abe Mills:  My man. Yeah. So, you can be edified together, right? And so, I feel like when we speak, we have to take an opportunity to listen, and both be edified. If we take it as a scolding as members of the Church. There are opportunities for us to speak up, and there are also opportunities for people to listen, and those who are on the listening end, depending on what we're talking about, at any given time have that ability to both be edified, and to look at it in that way. And I hope that's the route that we take when we're dealing with these issues.