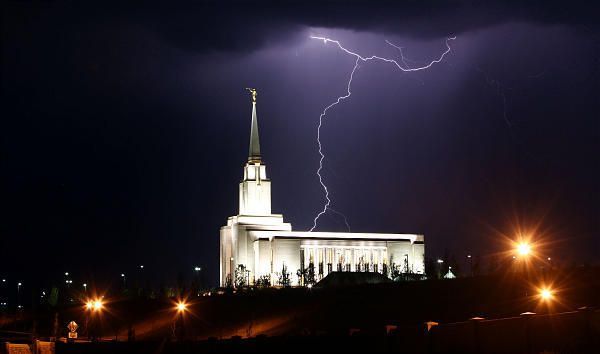 The angel Moroni statue that sits atop the Nauvoo Temple was replaced on Tuesday due to damage from a lightning strike that had occurred during the summer, according to a report from KSL. After the strike, much of the gold leafing from the statue was peeled away and a piece of the trumpet had been blown off. But that’s not the first time a temple has been struck by lightning.

In 2016, the Bountiful Utah Temple angel Moroni was replaced due to lightning strike damage as well, putting a hole in its head and back.

And in 2009, the Oquirrh Mountain temple angel Moroni statue suffered for the same reason, with its horn, arm, and face blackened, according to the Deseret News. People passing by stopped by to take a look and pictures. 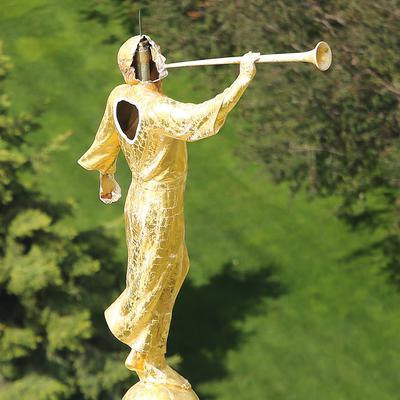 Image of the Bountiful temple angel Moroni from Church Newsroom

Even the steeple of the St. George temple, back in 1878, was struck by lightning during an intense thunderstorm, but that was all that was affected. Even after the strike, however, the steeple later underwent repairs to raise its height, as Brigham Young had requested before he died.

It’s not an uncommon thing for lightning to strike temples, but more specifically the strikes usually hit the fiberglass angel Moroni statues above them. “There's a misunderstanding that such strikes are rare, but that's not the case at all,” director of special projects at Oakland Construction told the Deseret News.

According to a November 2009 New Era article, the gold that’s gilded over the Moroni statue actually attracts the lightning.

“Since gold leaf is a perfect conductor of electricity, and because the figures are often placed high above the ground atop a temple’s tallest spire, they are frequently hit by lightning,” the article says.

Modern angel Moroni statues are also engineered with a lightning rod, which protects the entire temple from the lightning strike and prevents damage to the temple’s electrical system during a major thunderstorm. In addition to that, the rod serves “as the mechanism for mounting the figure on the building’s tower.”

According to ChurchofJesusChrist.org, the concept of the angel Moroni statue came about from a man who was not a member of the Church named Cyrus Dallin, who was asked to come up with an ornament for the central spire of the Salt Lake Temple. As he searched the scriptures, he found that Moroni most accurately symbolized the restoration of the gospel.

Now, the angel can be seen on over 150 temples around the world, symbolizing the restored gospel and providing a beacon of hope for the coming again of Christ.

►You'll Also Like: 10 Things You Didn't Know about the Angel Moroni Statue