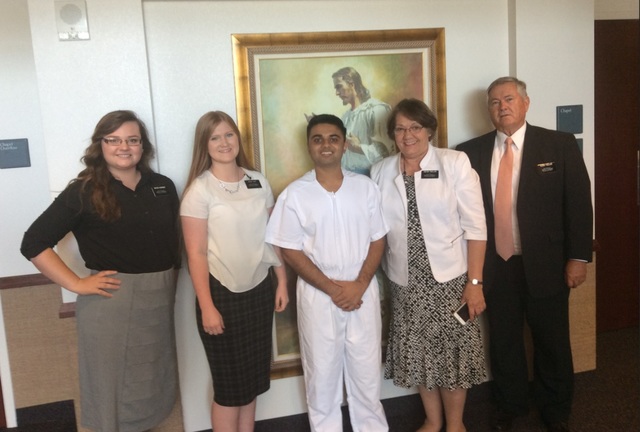 Protected by the Spirit

Shortly after he began praying, Shah received a children's copy of the Book of Mormon from the missionaries and promised to read it. At the same time, he found a new job and began working night shifts at a hotel in Draper.

On a thunderous night in May 2016, Shah was at the hotel with his younger brother, who often accompanied him during these long, dreary night shifts. At 2 a.m., while Shah was reading an illustrated children's Book of Mormon that the missionaries had given him so he could have a better overview of what the Book of Mormon was about, a man stumbled into the hotel.

"He is fully tattooed, and he is stammering and shivering. He is telling me, 'Someone was trying to kill me in the back of your hotel,'" Shah says. "This is the time when the Florida nightclub shooting happened, so it was a pretty intense period in America."

As Shah began questioning the stranger, he recalls, "My first instinct was that this guy is on some substance." After looking on the registry, Shah could not find the man's name listed anywhere, so he asked the man to leave before gathering his courage and stepping out into the stormy night to investigate.

Just 10 yards from the hotel doors and a few seconds into his proximity check, Shah spotted a man about 20 yards away who was acting erratically.

"It was pretty dark, so I could not see him properly, but the way he was behaving, it was very fishy. He was ducking underneath a truck and trying to look around at what’s happening," Shah says. "I started to take my steps back. Then, all of a sudden, I saw a spark from his hand and I hear a sound—the sound of a bullet." As Shah began sprinting away from his attacker, he remembers distinctly, "I could hear two sounds: one from the bullet leaving the gun and one from the bullet flying across me."

After avoiding about half a dozen rounds, Shah remembers thinking, "Nothing has touched me—that’s crazy." Shah ducked behind a nearby vehicle, adrenaline heightening all his senses as his heart pounded. He was still at least five yards from the hotel door, but his attacker was still firing, and Shah could hear the gunshots become louder and louder as the man approached the vehicle. Aside from the almost paralyzing fear, all Shah could think about was getting back to his brother inside the hotel.

"I just gathered some strength, and I got up," Shah recalls. "He fires again. It touches the car but doesn’t touch me. By the time I get back inside the hotel, grab my brother, call the cops, he’s fired 12 rounds at me."

A half an hour after calling the police, Shah recalls an officer carrying "a huge gun, I have never seen such a huge gun" into the hotel and informing him K-9 units had caught the suspect. In a blur, Shah faced the news reporters surrounding the hotel, asking him questions, trying to interview him. "I was just so scared at that time. I did not want to show my face," Shah says.

That morning, Shah quit his job, and while working with detectives to file police reports, Shah learned the man who attacked him had been a top 10 fugitive in the state of Utah and belonged to a white supremacist group called the Aryan Brotherhood.

Shah remembers one of the detectives telling him, "Son, I don’t know what it was, but in my 40 years of service, I have never seen someone miss at a shorter range like this."

But Shah understood what power saved his life. Despite living 22 years as an agnostic, Shah remembered what the missionaries taught him the first day they knocked on his door. At that moment, Shah could not deny the existence of a loving Heavenly Father or His grace any longer.

"I can get lucky once, twice, maybe thrice, but not 12 times," he says. "The next morning, I called the missionaries and I am like, 'Elders, you remember the Holy Ghost you were telling me about? I think that was the Holy Ghost. I was just saved 12 times.'"

He testifies, "Due to the divine power of the Lord and the protection of the Holy Ghost, not even a single bullet touched me."