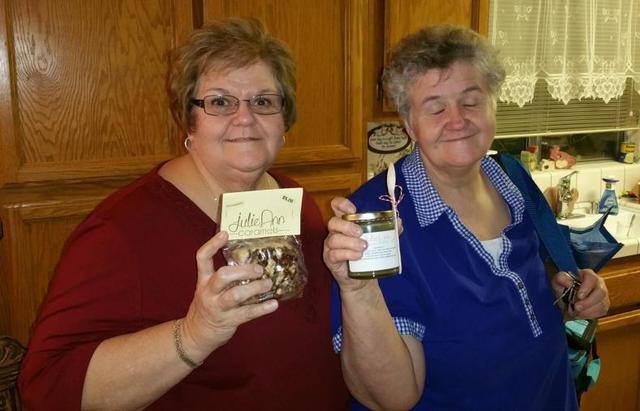 Rowena Montoya was 15 years old when her mother passed away of cancer.

Her father was "in and out" most of the time, leaving Montoya and three siblings to be sent to live with relatives on her mother's side.

"I went to Sacramento, my brother went to Morgan Hill, my sister went to Hollister. We were just all separated among my mom's family and lived two or three hours apart," she says.

Montoya was sent to live with an LDS aunt and her family, which she says changed her life.

She says she was able to see for the first time what life was like when a mom and a dad worked together to accomplish projects with their family.

Montoya also began to notice her aunt Julie's and her aunt Nancy Ann's creativity and ability to make "something out of nothing."

In particular, she noticed how they loved to make caramels.

As she grew older, Montoya moved away from her aunts, married her husband, Frank Montoya, raised a family, and settled into the "empty nester" stage of life.

Then after the recession in 2009, her husband's business fell into hard times. The couple had to "sell everything and start over," Montoya said. But Montoya was able to rely on her faith and past experiences to help her through.

"I think it goes back to when I was 15," Montoya says. "I know that the Lord always has something better in store for me. If that means for me to look and just be grateful for getting out of bed that day."

To help her husband, Montoya began traveling with him to trade shows for his business and noticed that people seemed more likely to approach a booth when there was some kind of treat involved.

She loved caramels and decided to ask her aunts for their special recipe.

After about 30 or 40 tries, Montoya was ready to test her product at her husband's stands.

The caramels were a success.

"My husband, who does those trade shows, is now known as the 'caramel guy,' not the trucking guy," Montoya chuckles. "He's my best salesman. I just can't afford to hire him."

Realizing she had to keep going, that she could not give up this far in, Montoya began JulieAnn Caramels, a name derived by combining the names of her aunts. The process to build a business was very slow at first, but Montoya wasn't just selling a brand, she was selling an entirely new product.

She began experimenting with flavors like bacon and maple syrup, chocolate, mango habanero, and pretzel. It got to the point where Montoya even dreamed of flavors—hence her coconut dream caramel.

With the encouragement of her friends at Guittard Chocolate Company, Montoya entered her caramels in a Specialty Food Association worldwide competition.

A little while later, Montoya was stunned when she got a call saying her mango habanero caramels had won a sofi award, one of the most prestigious awards in the culinary field.

To Montoya, it was like winning an Academy Award. After all of her hard work and building a company from scratch during one of the most difficult times in her life, Montoya had something to show for it.

"There are so many ways we can learn in life, and it's not really like we're being picked on. It's taken me a long time to realize that," she says. "In fact, God's creating something better for us and we may not see it in this life, it may come in the next. I don't know, all I know is I'm going to keep trying."