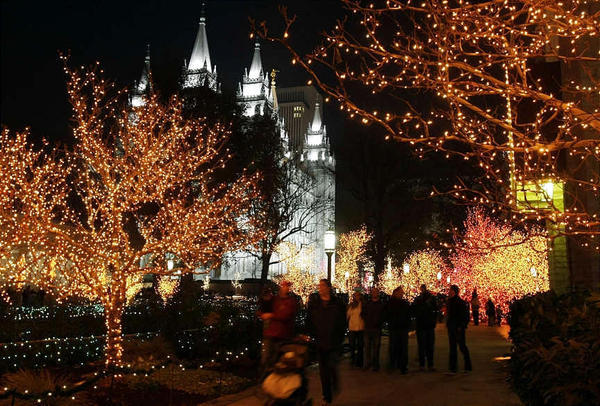 In the fall of 1965, the idea of Christmas lights on the trees at Temple Square was new and worrisome.

In a meeting with LDS Church President David O. McKay, Irvin T. Nelson, the head gardener at Temple Square, expressed concern that heat from lights might cause trees to come out of dormancy early with premature buds. Another man, arborist J. Leland Behunin, believed it could be done without harming the trees.

After some discussion, President McKay finally decided to allow the Christmas lights and said Behunin would oversee the project.

"My dad had never lit a tree in his life, but said yes, he could do that," said Benjamin Behunin, his son.

More than six weeks later, nearly 15,000 people gathered on Thursday, Dec. 9, at 7:45 p.m., to see 40,000 Christmas lights turned on for the first "Lighting of Temple Square." The Deseret News reported how "a mighty aah" of appreciation went up from the crowd as the lights went on, followed by a burst of applause. The Mormon Tabernacle Choir sang Christmas hymns and the crowd walked around in awe of so many tiny twinkling bulbs.