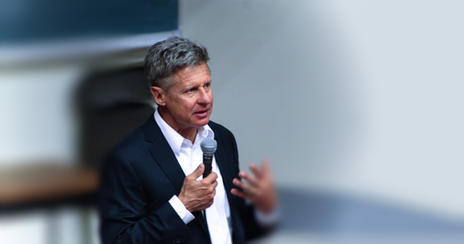 "I mean under the guise of religious freedom, anybody can do anything," Gary Johnson told a reporter from The Washington Examiner. "Back to Mormonism. Why shouldn't somebody be able to shoot somebody else because their freedom of religion says that God has spoken to them and that they can shoot somebody dead?"

This comment, given with little context, has caused some ripples among Latter-day Saints. However, the presidential candidate recently gave more background about this comment and helped clarified his views.

Libertarian presidential candidate Gary Johnson, once thought to be a potential darkhorse for the state of Utah in the 2016 presidential election, may now have a Utah problem.

During the Democratic National Convention, The Washington Examiner’s Timothy P. Carney spoke with Johnson about important national social issues, specifically religious freedom and the role the government plays in presiding over an individual’s religious beliefs.

Johnson didn’t seem too keen on passing “a law that allows for discrimination on the basis of religion” because “we're gonna open up a can of worms."

He told the Examiner that religious freedom is a “black hole” that can lead to more discrimination than the world needs.