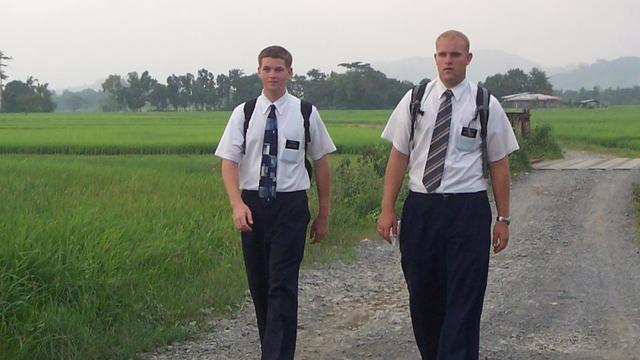 In his book, Divine Signatures, Gerald N. Lund defines a divine signature as "the Lord send[ing] His blessings in . . . a highly unusual, dramatic, or precisely timed manner, that it . . . is as though the Lord 'signs' the blessing personally so that we will know with certainty that it comes from Him."  The following story, excerpted from the book, is a remarkable example of one such divine signature.

One of the choice conversion experiences I personally experienced happened while I was serving as a full-time missionary in the West Central States Mission. At that time I was assigned to a town in central Wyoming. One day in sacrament meeting, one of the sisters in the ward approached my companion and me and said that she had a referral for us. It was her mother.

This member had been raised on a cattle ranch about 45 or 50 miles outside of town. Since her marriage, she had lived in town. There she and her husband had met the missionaries and were converted to the Church. In recent years, her father had passed away and now her widowed mother lived out on the ranch, all alone except for a few ranch hands who worked for her.

This sister asked if we would go out and meet her mother and see if she might let us teach her the gospel. However, and she was quite emphatic about this point, we couldn’t tell her mother that it was her own daughter who had sent us out there. The daughter had tried to talk with her about the Church but had been abruptly cut off. Her mother had told her that she had her own church and wasn’t interested in anything else.

We were thrilled, of course, and agreed to meet her mother during the upcoming week. The daughter gave us detailed directions because the ranch was a long way out in the country and accessible only by gravel roads. We set out and, following her directions, eventually found the ranch. I can still remember pulling up in front of the house and startling three antelope that were grazing on the lawn. That’s how isolated the ranch was.

When we introduced ourselves, the mother, probably in her mid-60s at that time, was quite surprised that we had found her. We told her we were missionaries and that we had a message for her. She frowned. She said that she already had a church and wasn’t interested in changing. When I pressed a little, she became quite firm and turned cool. However, since we had come so far, she graciously invited us in for some cold lemonade.

As we visited, we asked her about the ranch and her life there. It was obvious that she was lonely and glad for the company. Then, at an appropriate moment, as senior companion, I took the lead and again mentioned that we were missionaries for The Church of Jesus Christ of Latter-day Saints, often called the Mormons. Again she cut me off. She knew about the Mormons because her daughter had become one. She repeated what she had said before with even greater emphasis. She already had a church and was very happy with it.

Disappointed, but not quite ready to give up, I asked her which church she belonged to.

“To the Church of Evans,” she said.

My companion and I looked at each other blankly. “The Church of Evans?” Then, trying to recover, I added, “I guess I’m not familiar with that church. Tell me a little about it.”

That seemed to please her. “Well,” she said, “it’s not a church in the normal sense of the word. I mean it’s not a church that I attend on Sundays. I’m too far from town to do that. But this is a church that comes over the radio. I listen to it every Sunday morning. The Tabernacle Choir sings this beautiful music, and a minister by the name of Evans then preaches a short but wonderful sermon. I never miss it. So that’s my church. The Church of Evans.”

I gaped at her. “Do you mean Richard L. Evans?” At that time, Richard L. Evans, a member of the Quorum of the Twelve, was the voice for Music and the Spoken Word, the radio broadcast by the Mormon Tabernacle Choir.

“But Richard L. Evans is one of the apostles in our church,” I exclaimed. “That broadcast comes from our church.”

She was instantly skeptical and actually bristled a little, thinking this was some kind of manipulative trick on my part. She invited us to leave. Fortunately, I carried in my scriptures a folded sheet of paper with the pictures of the First Presidency and the Twelve. Eagerly I whipped it out and showed it to her. “There,” I said, pointing. “That is Richard L. Evans. He is a leader in our church.”

For a long moment she just stared at us, and then abruptly she stood up. “Stay right there,” she said and disappeared down the hallway. A moment later she came out carrying a large, gallon-sized Miracle Whip jar. It was stuffed to the top with bills and coins. “Here,” she said, handing it to me. “Mr. Evans talked about the law of tithing a year or so ago, and I was so impressed with what he said that I started paying my tithing immediately. But I didn’t know where to send it, so I’ve been putting it in this jar. I want you to have it since it is your church.”

In a bit of a daze, we explained that we couldn’t accept it personally, but that we would take it to the bishop and he would pay it to the Church. We then taught her the first discussion. We returned several more times, now with her daughter and her daughter’s husband, and taught her the rest of the lessons. About a month later, she was baptized into The Church of Jesus Christ of Latter-day Saints, sometimes known as “The Church of Evans.”

It is no surprise that the Lord would love a daughter like that. To pay tithing in a Miracle Whip jar when you didn’t even know what to do with it? That’s remarkable faith. But there was a problem. We never went tracting out in the countryside. Houses were widely scattered and it took too much gas. There was no way that we would have found her on our own. So the Lord made sure I had a picture of Richard L. Evans with us—something that I don’t remember doing either before or since—and prompted me to ask what church she belonged to. It took a little nudge from heaven to bring it all together, but it worked. She remained faithful to the Church until her death a few years later.

Throughout the book, Elder Lund relates story after story — some from Church history, some from his own life, and some from acquaintances — that illustrate the inspiring and life-changing insights he shares.

This book is a powerful blend of personal reflection and deep doctrine that will help us identify the tender mercies and “divine signatures” that abound in our own lives and which will lead us closer to God.