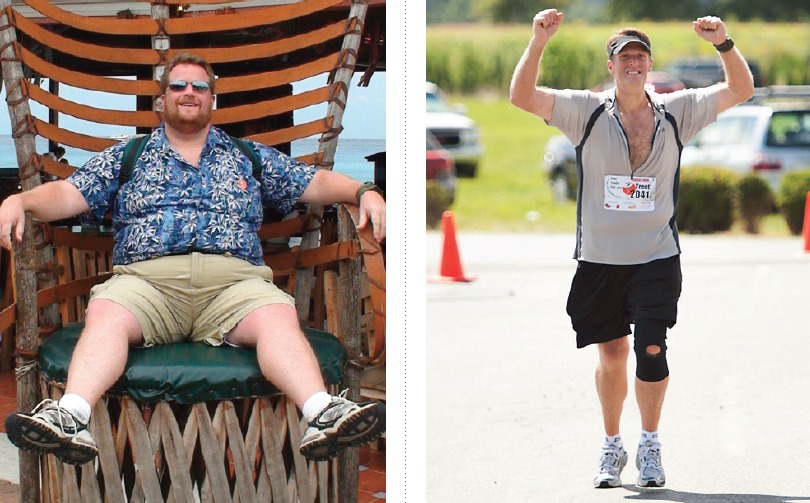 How I Lost 140 Pounds by Relying on the Lord

Losing 140 pounds is no easy feat. Just ask Trent Heppler. Never in a million years did he believe that he would one day shed the weight, let alone run a marathon. But Heppler learned that the power to overcome his physical weaknesses—whatever they may be—comes from a spiritual strength gained through the Savior, Jesus Christ.

Growing up overweight and self-conscious, Latter-day Saint Trent Heppler always felt that exercise was just another form of torture invented to make him feel inadequate.

But he masked his insecurities well. “I learned at a very early age to poke fun at myself and get a laugh before anyone else could,” says Heppler. “I now realize that was a common coping technique. That is why I became the ‘funny fat friend.’”

It was a role that Heppler played well, but it never made him truly happy. Year after year passed with no real change. It wasn’t until Heppler was nearing 35 that something switched in his mind. After hovering somewhere around 350 pounds for some years, he set a lofty goal: to run a marathon.

“I thought I needed something big and personal in my life to reach for,” says Heppler, “and this goal would help to accomplish many results like weight loss, fitness, and the praise of man. Where it took me was way beyond those first thoughts.”

The goal to run a marathon didn’t become a reality for many years. But on the eve of his 40th birthday, he decided that the time had finally come.

So on what seemed like a whim, Heppler asked his friend and fellow in the Young Men program in their ward, Scott Gifford, to become his personal trainer and help him train for a marathon—and Gifford said yes.

Everyone was surprised at his request, but no one more so than Heppler himself.“Now as I look back,” he says, “I realize it was inspired for me to reach for such a dream.”

The next thing Heppler knew, he was making a fitness plan with Gifford and another friend, Ty Engstrom. Every three months, Heppler aimed to lose an average of 30 pounds. His plan was to cut calories, exercise six days a week, and read a book called He Did Deliver Me from Bondage by Colleen C. Harrison. Although the book focuses on addiction recovery, Gifford felt that the book would help Heppler overcome his bad habit of overeating.

Heppler put his plan into action. His wife Melanie was instrumental to his successful diet. “I supported Trent in many ways. First and foremost was making all of the food he consumed!” she jokes.

“I found it critical to my success that I wasn’t the one preparing these meals, because my tendency was, and still is, to embellish them with extra calories,” he says.

Another important factor to his journey was simply being accountable to someone—in this case, his personal trainers. Every day he would tell Engstrom and Gifford the number of calories he ate. “Having someone to hold me accountable was super important,” he says. “I have found it is necessary to schedule, plan, and write out my goals. That way it’s more than just an idea—actions have to be taken.”

To add to his healthier diet, he began an exercise regimen. “The exercise I did for the first three months of my journey was primarily walking,” he says. But even walking came with challenges. “In the beginning, it hurt my knees, my joints, my back, all of it—but I eventually got stronger.”

Instead of listening to typical pop music during his exercise sessions, Heppler began listening to inspirational music and talks—hymns, scriptures, general conference addresses, and other spiritual materials. “I quickly altered the use of time during exercise to meditate, think, and pray,” says Heppler. “As I read He Did Deliver Me from Bondage, exercised, and felt the Spirit more, I wanted more of those things. My weight loss journey became one of transformation because I was seeking after the good.”

Heppler began to realize that as his body changed for the better, so did his spirit. At the beginning of his journey, he never expected his testimony of the gospel to help him lose weight—but that’s exactly what happened.

Transforming the Body and Spirit

After three months of consistent hard work, he had already lost 57 pounds. So he upped his exercise to jogging instead of just walking. He continued to use his exercise time to draw closer to the Lord. He would run only a few miles at first, but as his strength grew, he began to go for longer runs that allowed him even more time to ponder on the truths of the gospel.

“During the best times of this journey, I read or listened to the scriptures every day,” Heppler says. "Some of the most sincere and heartfelt prayers and feelings were and still are on my walks and runs. That has become ‘spiritual time’ for me.”

As his closeness with the Lord increased, his behavior changed. He began to have more patience with others and enjoy the simple things of life. He cherished even more the time he spent with his wife, son, and daughter.

And Heppler wasn’t the only one who was noticing his spiritual transformation.

“He started relying on the Lord in everything,” says his daughter, Jonaka. “He became a spiritual flame. He bears his testimony every day, and you can feel the Spirit coming from him. He is one of my biggest inspirations.”

At six months, Heppler had lost 96 pounds and had beaten his six-month goal by four pounds. He started to go on even longer runs to prepare for the marathon that was now only a few months away.

“The times I spent on my long runs and the Spirit that was with me are precious, sacred, and full of learning experiences. Those were times when I was exhausted and in pain, but the Spirit lifted my body, making me move forward.”