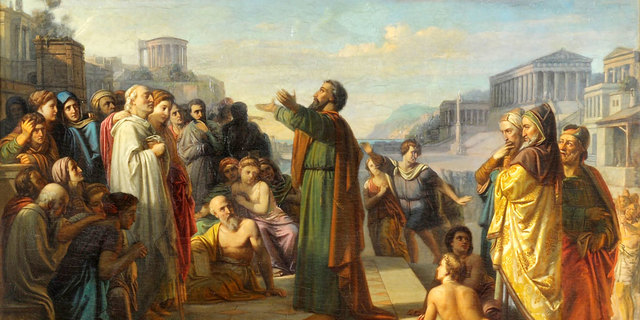 The setting was an institute class wherein some important dimensions about Acts 16–20 became clear to me. For example, it became apparent that in three instances the Lord had coated his believers with Teflon, so to speak. All instances involved the Apostle Paul in one way or another. Plainly, the Lord watches over his people and orders events for their good, whether they perceive it or not.

First, in Philippi, Paul and his companions were arrested on the complaint that they had ruined the employment of some handlers of a young woman who had a gift of telling people’s fortunes (Acts 16). Paul had cleansed her of the evil spirit that inhabited her body. The handlers complained to the city fathers and Paul and his companions were summarily beaten and clapped in irons. But wait. If the Lord was guiding matters, should not Paul and the others have been protected?

Here comes the answer. Later, as we know, he and his fellow missionaries were miraculously released from prison, resulting in the conversion of the jailer and his family, all in the same 24-hour period. Without knowing of the miraculous release, the next morning city officials ordered that the prisoners be freed and sent out of the town. But when they learned that Paul and his companions were Roman citizens who had been imprisoned without a hearing, the officials hastily came to the prison and offered a formal apology for arresting and beating Roman citizens. The result? The converts that Paul had made in the city were now hands-off to city officials. Why? Because they did not want to be embarrassed again by harassing his friends as they had been with Paul. In effect, the believers in Philippi became untouchable.

The second Teflon experience with the Apostle Paul occurred in Corinth. The story is repeated in Acts 18. Paul had settled in Corinth, working as a tentmaker with a Christian couple who had been forced out of Rome in AD 49 because they were Jews. Paul, of course, had been hounded earlier by unbelieving Jews almost everywhere he had traveled over a period of years, first in Asia Minor (now Turkey) and later in Greece. These opponents had stirred up fellow Jews and city officials against Paul and his companions. Now some found a reason to haul him before the Roman magistrate in Corinth, mainly because Paul had taught and baptized a leader of the synagogue in the city.

To the amazement of Paul’s accusers, and even Paul himself, the Roman magistrate, a fellow named Gallio, saw the matter as a totally Jewish one and allowed a bunch of ruffians to beat up one of the leaders from the synagogue in the public square. From that point on, the Jewish people in the Corinth synagogue stayed away from Paul and his fellow Christians, giving them wide berth.

The third instance occurred in Ephesus at the end of Paul’s extended ministry there (Acts 19). Most New Testament students will remember that the silversmiths in the town were losing money because Paul and his fellow missionaries were convincing local citizens, and even tourists, that the worship of Diana was idolatry and that the little silver images of the goddess made by the silversmiths were not only worthless but also offensive to God. To make matters worse, a huge, dazzling temple to Diana sat a mile and a half away, one of the seven wonders of the ancient world. A fellow named Demetrius whipped up his fellow silversmiths into a frenzy and they marched from their shops in the main business district to the nearby theater, which was massive by any standard, seating 25,000 persons. There they began yelling and chanting, determined to drive Paul and his friends into hiding or, perhaps, from the city.

Finally, the town clerk from the upper city showed up to see what all the fuss was about. He told the silversmiths in so many words that there were laws in the city and, if anyone had a complaint about others, that person should come to the city offices and register the complaint so that city officials could look into the matter. Then he dismissed all the silversmiths back to their shops. Meanwhile, Paul figured out that he could not stay in town because he was known as the leader of the movement to discredit the worship of Diana. So he left. But the fact that the town clerk had demanded that the silversmiths register any and all complaints at the city offices meant that they would not pursue this path because, well, it meant a lot of paperwork and expense. Besides, Paul, the object of their anger, was gone. So they settled down to their work and the Christians went back to what they were doing—preaching the gospel to any persons who would listen.

In these three instances, matters worked out for the well-being of believers in the three cities. And we rejoice in the resulting circumstances. But each began with a significant challenge to Paul and his associates—the arrest and beating in Philippi, the harassment in Corinth, and the angry threats from the silversmiths in Ephesus. That is to say, blessings of the Lord rarely come without some genuine difficulty, without a dispiriting challenge. That is surely the message of Jesus’ temptations in the wilderness when, after a prolonged period of spiritual strengthening and enlightenment, Jesus had to face the devil himself.

In a related vein, in our lives we occasionally experience troubles that seem never to be resolved no matter how hard we try and no matter how much we plead for heaven’s help. Why is that? That, one has to say, is the nature of mortality and, on a spiritual plane, the test of our discipleship. Jesus faced and then underwent the trials orchestrated by the devil. And where did Jesus’ experience get Him? It led Him back to His hometown Nazareth where, at the end of the next week’s synagogue service, He was run out of town by people He had grown up among (Luke 4:28–31). For Him, the outcome was not the important event. Rather, it was His commitment to the purpose for which His Father had sent Him. He simply retreated from the angry face of rejection and went down to Capernaum where He would call the first members of the Twelve.