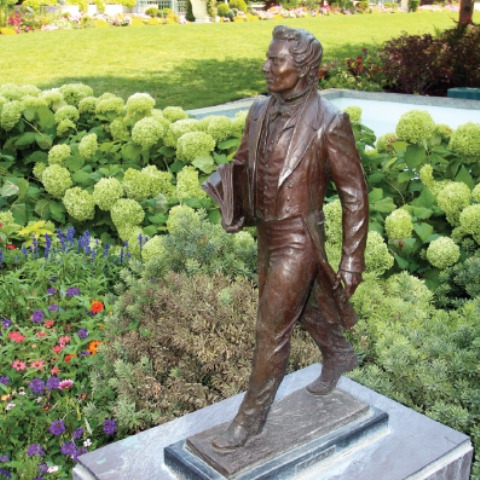 On February 24, 1834, Parley P. Pratt and Lyman Wight told a somber story to the Kirtland high council. Hundreds of Saints in Clay County, Missouri, were suffering after being driven from their homes in Jackson County by mob violence. They now found themselves impoverished and wondering what the Lord wanted them to do. How would the lost property in Jackson County be regained? When would the Saints be able to return to their beloved city of Zion? Pratt and Wight posed such questions to the high council, telling them that “the idea of being driven away from the land of Zion pained their very souls and they desired of God, by earnest prayer, to return with songs of everlasting joy.”

Building the Camp of Israel

Having listened quietly to Pratt and Wight’s report, Joseph Smith stood up and proclaimed that he was “going to Zion to assist in redeeming it.” He asked for volunteers to go with him, and 30 or 40 individuals promptly responded. Sometime that same day, Joseph received a revelation explaining a parable of a nobleman whose land had been overrun by his enemies and who asked his servant to call up “the strength of the Lord’s house” to redeem it. The revelation declared that Joseph was the servant, and he needed to gather together at least 100 men—preferably 500—to aid the suffering Saints in Missouri.

Thus were the beginnings of an expedition to Missouri known at the time as the Camp of Israel, or Zion’s Camp today. From May to June 1834, Joseph led a contingent of 230 Saints—men, women, and children— to Clay County. Joseph’s example throughout the journey illustrated numerous leadership principles that impressed participants of the camp years after the expedition concluded, many of which we can apply today. Three of those principles stand out in particular:

Let’s examine a few examples of these principles in action to understand why the Zion’s Camp expedition bound Joseph even more closely to the hearts of those he led and how we can apply them today.

► You'll also like: 9 Books to Help You Learn More About Joseph Smith

The Principle of Inclusion

Throughout the expedition, Joseph looked for those who were alone, who did not quite fit in, or who were on the margins of the expedition and sought ways to make them feel included. Sometimes it was as simple as paying attention to those who seemed lonely.

Lyman Littlefield, for example, was a 14-year-old boy who was feeling especially sad one day when all of the men were parading “for exercise and instruction.” Littlefield was “too young and too small of stature” to participate, and he sat down on a rock, feeling sorry for himself. According to Littlefield’s later recollection:

While thus seated, the Prophet Joseph Smith, who happened to be passing by in quite a hurry, noticed me. He stepped to where I sat alone. It might have been my isolated position that attracted him. I knew not the motive; but that man, who to me appeared so good and so godlike, really halted in his hurry to notice me—only a little boy. Placing one of his hands upon my head, he said: “Well, bub, is there no place for you?”

Such an action seemed fairly insignificant, but for Littlefield, it meant everything. Recalling this incident several decades after it occurred, Littlefield still felt impressed by the Prophet’s simple action:

This recognition from the man whom I then knew was a Prophet of God created within me a tumult of emotions. I could make him no reply. My young heart was filled with joy to me unspeakable.

George A. Smith, Joseph’s cousin, similarly felt Joseph’s inclusive influence. As an awkward 16-year-old, George felt out of place among the other camp participants. He described himself as very large for any age and afflicted by weak eyes. His striped bed tick pantaloons did not convey a sense of fashion, especially since they “were worn off on the inside nearly up to my knees.” His straw hat was also in poor shape because he had accidentally sat on it in his tent.

Recognizing George’s unease, Joseph went out of his way to make him feel included. He made George part of his own company and directed him to sleep in his same tent. This allowed George to hear many of Joseph’s counsels and instructions to the leaders of the camp. Joseph also encouraged George to be a sort of camp spokesman for individuals wanting to know what the camp was and its purposes. Acting on Joseph’s advice, George shared that he “generally fell somewhat in the rear” of the camp when they marched through towns to make himself easier to approach. “I had many amusing conversations with inquisitive strangers,” he later remembered. Such incidents helped George feel more a part of the expedition and more at ease with himself.

In addition to the men who marched with Zion’s Camp, the expedition included about 12 women. Joseph made a point of listening to their concerns and helping them feel a part of the group as well. For example, when the expedition was camped at the Salt River settlement in Missouri, Joseph, concerned about possible outbreaks of violence should the camp encounter mobs, told the women and children to stay at Salt River while the men marched on. The sisters were not pleased with this direction because they wanted to continue with the camp. Hearing their concerns, Joseph declared, “If the sisters were willing to under go a siege with the camp, they could go along with it.”

According to Joseph Holbrook, the women “liked Brother Joseph better than before for the privilege he gave them of continuing in the camp.”

► You'll also like: Doctrine and Covenants and Church History Lesson 27: "They Must Needs Be Chastened and Tried, Even as Abraham"

The Principle of Leading by Example

Another way Joseph endeared himself to camp participants was by his willingness to endure the hardships that others experienced. The expedition covered much ground in a short period of time, and participants sometimes walked as many as 40 miles a day. Such a strenuous schedule left many in the camp with blistered and bloody feet. Joseph insisted on walking with the camp members instead of riding in one of the expedition’s wagons. According to George A. Smith, the Prophet “had a full proportion of blistered, bloody and sore feet, but never uttered a murmur or complaint.”

In a similar way, Joseph insisted on receiving no preferential treatment when it came to food. On one occasion, Joseph discovered that those in his company had received sour bread for lunch while he was given sweet bread. He reproved the cook, explaining that he “wanted his Brethren to fare as well as he did.” He then ate sour bread with them.

On another occasion, the camp obtained a dozen hams—which were not enough for each company to have one. Joseph and his company agreed to let the others take the hams while they ate mush and honey for dinner. However, those who received the hams soon discovered they were rotten and, in anger, threw several of them at Joseph’s tent door, telling the Prophet, “We don’t eat dirty, stinking meat.” In response, Joseph directed his company’s cook to fry up the hams. The cook did so and, according to George A. Smith, “For once all our mess feasted to their full satisfaction and I thought I never tasted nicer meat in my life.” Clearly, Joseph did not believe that he was above those he was leading and he insisted on being treated the same as everyone else.

The Principle of Being Willing to Reprove When Necessary

The Zion’s Camp expedition was a grueling journey at times, both because of the amount of walking and also because the group suffered occasionally from a lack of food and water. Although most of the participants accepted the circumstances gracefully, there were some malcontents. One of these was Sylvester Smith, a member of the Kirtland high council who caused numerous problems throughout the trip. He insulted fellow camp member John S. Carter, refused to give Parley P. Pratt bread when Pratt was in need, argued with Joseph Smith after Joseph’s dog barked at him, and generally disrespected the Prophet’s leadership.

Sylvester’s conduct frustrated Joseph at times, and though Joseph did not always respond with patience (he once threw the camp bugle at Sylvester), he used Sylvester’s behavior on other occasions to teach camp members important lessons about the need for unity and humility when working for the Lord. After Sylvester had insulted John S. Carter, for example, Joseph declared that Sylvester’s rebellious spirit would cause the camp to “meet with misfortunes, difficulties and hindrances, and you will know it before you leave this place.” When the camp awoke the next morning, all of their horses were so badly foundered (a painful condition on a horse’s foot) they could barely lead them to water. Joseph then told camp members if they humbled themselves, their horses would be healed. By noon, all of the horses were restored to health except for Sylvester’s, which died. “The brethren then deeply realized the effects of discord,” Heber C. Kimball remembered.

Joseph’s rebukes of Sylvester eventually resulted in Sylvester charging Joseph with “criminal conduct” while leading the expedition—charges for which Joseph was acquitted. Yet Joseph held no hard feelings toward Sylvester, and although Sylvester was removed from the Kirtland high council, he was selected as one of the initial members of the Seventy in February 1835. This was a living example of the principle Joseph would later teach to the Saints: that leaders needed to “reprove betimes with sharpness, when moved upon by the Holy Ghost” and then show an increase of love afterward to those so reprimanded.

► You'll also like: The Only Thing Scarier Than God Working Through Imperfect Leaders Is to Think He Doesn't

Looking back on their experiences with Zion’s Camp, most participants regarded the adventure fondly, especially because of the lessons they learned from Joseph Smith. Wilford Woodruff noted that in the camp, he saw God’s power with Joseph. Marshal Hubbard, another participant, told his wife, Caroline, on his deathbed that his time with Zion’s Camp meant more to him than “all the world beside” because it taught him that Joseph was a prophet of God. These three principles illustrated to the early Saints that Joseph Smith was a righteous leader and helped them deepen their testimonies of his divine calling as a prophet. And they can continue to do so for us today. 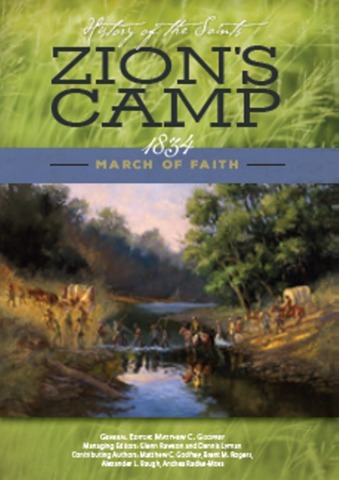 For more information on Joseph Smith and Zion's Camp, watch for the upcoming book Zion's Camp, 1834: March of Faith, published by History of the Saints, available at Deseret Book.