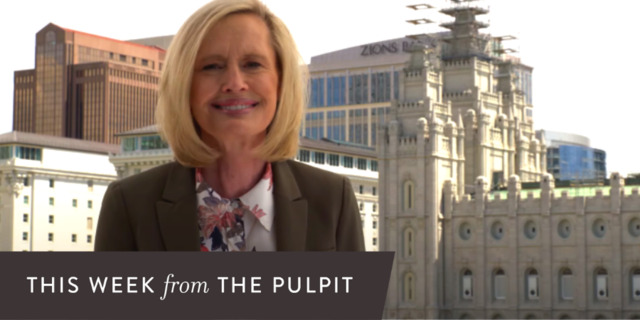 Latter-day Saints have not swept President Russell M. Nelson’s invitation to #HearHim under the rug. Five months have passed since the prophet asked us to “think deeply and often about this key question: How do you hear Him?” The responses to his request have ranged from public efforts, such as the #HearHim video series, to personal endeavors that are only known to the Lord.

This week, Church leaders continue to remind us that the prophet’s special invitation doesn’t have an expiration date. Elder David A. Bednar of the Quorum of the Twelve Apostles shared on Facebook how we need to seek to hear Him daily.

“If you and I will ask, seek, and knock (see Matthew 7:7), always keeping ourselves worthy to “Hear Him,” then the gates of the spiritual reservoir will open to us, and the living water will flow. I witness, I testify, and I promise that this is true,” he wrote.

Elder Ulisses S. Soares of the Quorum of the Twelve Apostles told listeners during the Youth Music Festival that by seeking to hear Him they “can trust that the Savior is near.” Young Women General President Bonnie H. Cordon witnessed the close involvement of the Savior in her life as she participated in the opening of the Salt Lake Temple time capsule.

May reading the teachings and experiences of Church leaders this week remind us that the Savior is always near, ready to listen, and eager to be heard.

On April 6, 1892, a capstone ceremony was held to commemorate the nearly completed Salt Lake Temple. Part of this event was depositing a time capsule in the concrete finial that the angel Moroni statue stands upon. The time capsule contained books, photos, letters, paper notes, medallions, and coins—lots of coins.

President Bonnie H. Cordon was likely anticipating the opening of the Salt Lake Temple time capsule, but she had no idea what a personal, spiritual connection awaited her inside the capsule.

► You may also like: Salt Lake Temple time capsule opened after 128 years. What’s inside?

Church News writes that when Emily Utt, historic sites curator for the Church, casually mentioned that one of the 400 coins in the time capsule had the name Alice Hillam inscribed on it, President Cordon leaned forward in disbelief. Utt did not know it, but Hillam is President Cordon’s maiden name.

They soon realized that Alice Hillam, who would have been 17 years old at the time she threw her coin into the time capsule, is President Cordon’s grandfather’s cousin.

“There was this immediate sense of connection—a sweet confirmation that Heavenly Father not only knew Alice, but He knew me and was guiding both of us in our faithful efforts to serve Him,” President Cordon said. “It felt like I had discovered a great treasure.”

Read more of President Cordon’s takeaways from this experience at Church News.

President Cordon also discussed what youth can learn from Alice’s example in a video produced for the first digital Church Youth Music Festival broadcast on July 29, 2020. The video features the members of the Young Men and Young Women General Presidencies giving a tour of the Salt Lake Temple site.

“I look at this coin and I think about 17-year-old Alice—could she have imagined 128 years later we would discover her simple offering? At times we may feel like we do not have much to offer. A small coin in the vast world of treasures. But the real gift is our willingness to give,” said President Cordon. “Like Alice, I hope you will toss your coin in. You are enough now to make a Christlike difference in the lives of others.”

Brother Brad Wilcox also encouraged youth to not underestimate themselves, but to actively seek for their righteous desires. He emphasized that the Salt Lake Temple took forty years to build. The pioneers could have chosen to give up on such a challenging, lengthy goal. But they did not.

“Some of the goals that you have in your lives are not going to get done in a day or two. They’re not going to happen in a week or two. Or even a month or a year. Some of them are going to take a long time,” said Brother Wilcox in the video. “When you get discouraged and you feel like giving up, you focus on this temple and think about the pioneers who built it. Think about those Saints who didn’t give up. And let them give you the motivation to keep going. Don’t you give up. Don’t quit. Your worthy goals are worth it. And with the help of the Lord, you can do it.”

► You may also like: My 4 unexpected takeaways from a digital fireside with Brother Brad Wilcox and Sister Michelle Craig

Elder Ulisses Soares and his wife Rosana were also featured in a video during the music festival. Speaking first in English and then in Portuguese, they testified that learning to hear the voice of the Spirit can bring peace no matter our circumstances.

“My young friends, what a fantastic time to be alive. In a world where uncertainty abounds, we can find hope and confidence when we look to our Savior, Jesus Christ. As we focus on President Russell M. Nelson’s invitation to Hear Him, we can trust that the Savior is near, that He listens, and trust that He can and will speak to us,” said Elder Soares.

The Soares’ remarks were followed by brief testimonies by youth in eleven different languages, from Zulu to Italian, on how they #HearHim.

Other highlights from the Youth Musical Festival include a new music video of the song “Good Day” from the 2020 Youth Album, a performance from Yahosh and Oba Bonner, and musical contributions by youth from around the world.

The full music festival can be viewed on YouTube.