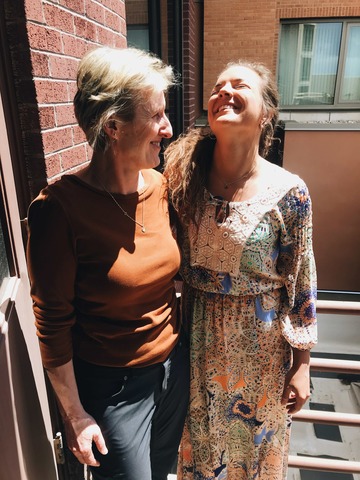 Olga Campora was a young college student living in Czechoslovakia behind the Iron Curtain when she joined The Church of Jesus Christ of Latter-day Saints. She was introduced to the Church by a man named Otakar Vojkuvka, who opened her heart to religion by first teaching her principles of yoga. After joining the Church, Olga felt a desire to share the joy she found with others, and for a decade, she joined Vojkuvka in sharing the gospel through yoga.

On this week’s episode of All In, Campora explained to host Morgan Jones what it was like sharing the gospel with others in a Communist country.

Read about Olga’s experience below or listen to her interview here.

Morgan Jones: Olga, after [you were baptized], . . . you had desires to share the things that you had found, but there were dangers associated with being a member of the Church and with sharing your faith. Can you tell those listening a little bit about that?

Olga Campora: Right. So, right after I was baptized, I felt such a great desire to share it. Not that I was told, “Every member should be a missionary,” right? There was such a desire for me, because what I had experienced, I knew deep in my soul, “This is true. This is what I am living. This is true. This is truth that I was looking [for] my whole life.” And so, I wanted to introduce that to my friends and also my family.

And as I talked about it with, especially Dr. Vojkuvka, we have to find a way to do that because of course, at that point, I just knew that the Church was persecuted. And he just says, "This is what we do. And this is why you actually came to my house and learned first about yoga. Because most of our missionary work is done [by] just helping people to live a healthy life and sharing what we can publicly.” And yoga, to some degree, was allowed to be practiced. That was a doorway really to talk about positive values of life without mentioning the Church or the Book of Mormon or even the word “God.”

I started teaching this big yoga classes. I got certified like you have to start first teaching yoga. And [he said], “That will be your way to just start sharing what you believe in.” And what was amazing was that each Friday, I would be driving from college to my little hometown. And I would have classes that literally there were like 100 people in a class, and I would teach like from 4 p.m. until 9 p.m., so I had about four courses, and it would be every Friday. And what was really interesting, what he told me, the way you have to do it, it's just of course I did poses, yoga asanas, we did relaxation, but always in the end he says, "You have to give like [a] little fireside, and it just kind of can be like a five-minute thing." So, he was coaching me, it just is like how to start.

The people in Europe are so secular and focused on health, so he just says, "Let's start with the Word of Wisdom, but we will be very smart about it. We'll just kind of say how to eat, how it's important for us to exercise." We started really with these little baby steps. And then we started, I started introducing the topics of joy, or respect, or forgiveness, and the way I started doing it, I started looking for the quotes and books from people who were generally okay for the Communist society, so I could cite Gorbachev, and he would say something that I could completely be aligned with the gospel of Jesus Christ, or they love to hear from Russian authors. So, if I would have some really great quote from Tolstoy, or whatever, so that was because there was always a secret police there too. And I knew that because all those guys, they didn't want to exercise. You could tell that they were smoking every single time when they came, and so you knew that you were watched in those [classes]. It was not kind of free, especially when so many people gathered. It was suspicious.

And then, later on, I also started being questioned by the police and stuff like that, but that's how it started. And then what we did was that we started doing yoga camps—summer yoga camps. And we started doing it with Brother Vojkuvka, [and] his son. And it was kind of like a little group of people, maybe we are talking about 20 to 30 people. And we would just do like these weekly camps. We started on Monday and went until Saturday. And it was just, that was the most amazing coaching of my life. I did it for 10 years since I was just kind of baptized. And it was because I saw how these priesthood brethren were working with other people, and just how they really just talked to people about being happy. . . . So, these people came from my classes and from other yoga classes, they would come to these camps. And [in] the first meeting with us, as the leaders of the camp, Brother Vojkuvka says, "Okay guys," to everybody, "you are here to experience the most amazing week of your life. You are going to be taught how to be happy." And everybody was like, "What?"

OC: Yes, exactly. Like joy, what? And so, if you read really closely my book, that it was a concept to it, what we did. Of course, we did exercise, we eat very simple food, but there are a lot of good lectures, but you couldn't still kind of talk openly about God but because of all these positive values that you have introducing to people. People's hearts got open, and they felt that there was just something more, and some of them came.

So, from that number, we would have people and they kind of sense, “I want to know more about this. I just really want to live like you are. What should I read? What should I do?” So, then we started something what was called "A School of Wisdom" with Brother Vujkuvka. So, we would meet like, every Sunday, before the church, little meetings that we had, we would meet in his house, so that was a smaller group, right from these 150 people that I will be teaching yoga every week, to these little camps that was . . . maybe each can be 30 people or 20 people. And then from there, like three or four people would come to School of Wisdom. And that was the point where he started introducing really the concept of what does it really mean to believe in God? Who is He? And how we can communicate with Him. And that was just so new to people. Because even though to me, when I was first introduced through concept that actually Heavenly Father is talking to you, [I was like], “What? There is a God who actually is interested in me to communicate with me?” And so, and all those concepts, for people, it was also for them so new, and we still had to mingle through things. We have to do a little bit of yoga stuff because they were coming for it. We cannot just, "Woo, so you guys are here." So, we have to have some integrity, but then from those people, there were people who really were interested in the Church.

And so, it was so much fun because then I was really, I was the one who was teaching the discussions . . . and I was just so happy. I mean, there were like, over probably 50 baptisms. . . . I was ready to prepare people for baptism. And it's so amazing to see. Of course, some of them they fall astray, but it's just like today—the first stake president that we have . . . in the Czech Republic in Prague—he, I remember, he was the very small group that I was teaching in my hometown, and it was four people. And all four of them are people who are just active at church doing beautiful things . . . translation of the Book of Mormon, and many other beautiful things. And it's just so wonderful to see that you could be a part of this very small, small miracle in this small little town, in this smaller little room that I was preparing like four people for baptism. And today, these people are just such pillars in the country where I come from. . . . I know that people kind of might think about it—that it was just strange and weird. But if you think about your life, and there are probably a lot of listeners who are listening to it, that it was not a straightforward pathway through a missionary. It's just sometimes people go, even through experiences that you would never ever guess, like how through that negative experience, somebody can actually embrace the gospel? And I think, from the perspective where we were, I think that it's obvious that the Lord, He knew exactly what the field was, like, there was just simply, it was desert, there were a lot of stones, a lot of just like, “What can I use? How can I bring the light here among these people?” And so, He knew that there were simply tools that He could use to be able to open up the light and the restored gospel to people in my country. And so, as strange as it is, it worked really great in the beginning because it was that little foundation that we needed to have to start off the Church when [it] came time when the Church was recognized. And we started actually having little branches. And it all started from these little yoga camps and School of Wisdom.

Lead Image: "All In" host Morgan Jones shares a laugh with Olga Campora.