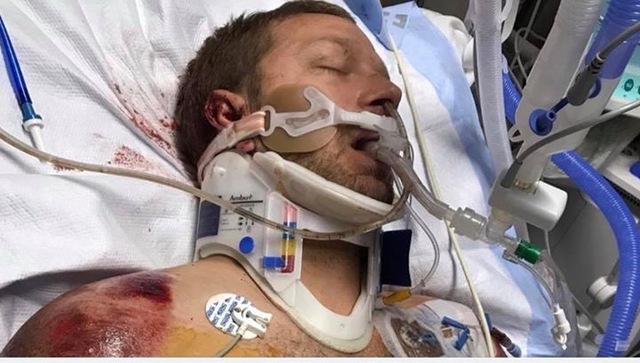 “Why don’t you take the bigger helmet, Dad,” Jake Johnson said before leaving the shop. Those were the last words 10-year-old Jake said to his dad before the accident. Jake’s words would be the first of many miracles the family has seen that helped save his father’s life that day.

On July 7, 2018, Cameron Johnson decided to take his newly acquired bullet bike for a ride. As a mechanic specializing in auto body work, Johnson had taken the sport bike in as collateral from a friend who was struggling to pay hospital bills for his expectant wife. According to Johnson, he bought the bike so he could give his friend a loan to be paid back later, and he would return the bike when the debt was repaid.

At the time, Johnson’s mother, Carol Lukens, was in town helping him with his children during a difficult time in the family’s personal life. Lukens planned to take the kids to the local pool, and Johnson was looking forward to meeting them there after lunch.

That’s when it happened.

While riding the motorcycle, Johnson slid out of control and found himself being tossed and dragged on the street. As Johnson lay broken, bleeding, and hanging on to his life, a woman ran toward him. She was an ER nurse, and she knew Johnson well. According to Lukens, the woman saw the accident in her rearview mirror and noticed it was Johnson. For the next several minutes, the woman stayed with Johnson, keeping his airways open until emergency crews could arrive, which, according to Lukens, did not take long. 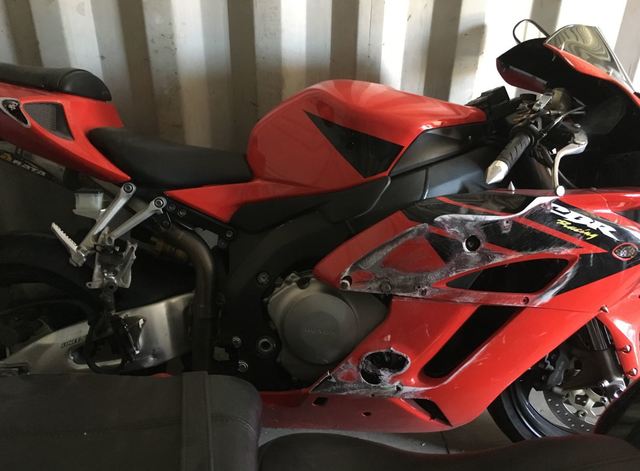 “It was nothing short of a miracle that Cameron’s friend who worked in the ER was there when the accident happened,” Lukens said. “Emergency crews were also able to arrive within minutes of the accident so he could get to the hospital quickly. With the extent of his injuries, Cameron might not have survived if these things had not happened the way they did.”

Emergency room doctors found that Johnson had broken his clavicle and shoulder, along with all the ribs on his right side. He had road rash and a punctured lung. Even though he took the bigger helmet like his son had asked, Johnson still suffered a broken skull and traumatic brain injury, which may have been much worse had he not heeded the prompting of his son. Due to his injuries, Johnson was put into a medically induced coma for several days. 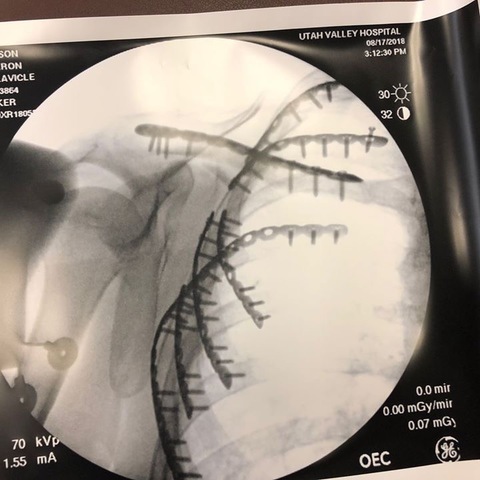 An X-ray of Cameron Johnson’s clavicle and ribs showing pins to repair his seven broken ribs from a motorcycle accident in July 2018.

Johnson would require surgery to fix his ribs with seven different plates. He would need to have staples in his head, wear a sling for his clavicle (that would later require surgery), and have two stents put into his lungs. On top of that, the fluid in his lungs caused him to develop pneumonia.

The problems continued to mount for Johnson, who was told by doctors that he would be in the hospital for several months, and it would take even longer to recover after that. The young father of three and business owner had not only physical worries but also the stress of how he would take care of his family and business while he wasn’t able to work.

“While he was in the hospital, Cameron worried about how his family and business would survive,” Lukens said. “He’s not one who does well with being put down, so this was really hard for him.”

Johnson was alive due to several miracles, but he would need another to be able to continue to bless the lives of his children and those around him.

After several days in the hospital, Johnson, a member of The Church of Jesus Christ of Latter-day Saints, received a priesthood blessing from a family member. According to Lukens, in that blessing, Johnson was told that he would make a full recovery. 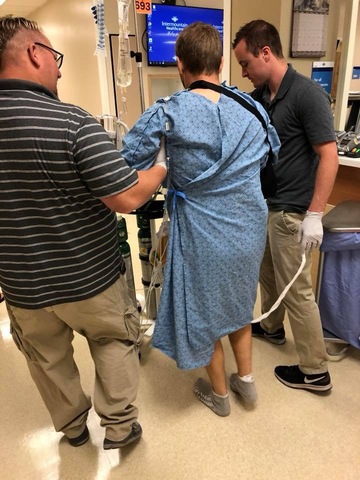 What seemed to be impossible started to happen. One week after the accident, he was off the ventilator, catheter, and IVs and out of the neurotrauma ICU. His wounds were healing. He was able to walk with assistance and eat regular food. On July 25, less than three weeks after the accident, Johnson was released from the hospital and on his way to that promised full recovery.

“Cameron has a good heart and has always been willing to do what he can to help others,” Lukens said. “It was hard for him to be helpless, but it was good for him to see that others cared so much for him. While he was in the hospital, friends and family raised enough money to cover the rent and expenses for his business so that when he returned, he had fewer worries there.”

It wasn’t long before Johnson was back working at his shop, repairing cars, and even making custom vehicles to fit the needs of his customers. More than that, Johnson said he feels he has been given a second chance to help those around him.

“Not long before the accident, I was making plans to retire early,” Johnson said. “I’d nearly paid off my home and recently sold it, putting myself in a position to have an early retirement. After the accident, I realized that I still had more to give. I had more people I wanted to help and give opportunities to. I have knowledge I want to share with others so they can learn and grow, whether it’s teaching them skills to fix cars or just by getting to know them.”

Johnson’s mother said she often thinks back on that summer day when she nearly lost her son. Now, she focuses on the tiny moments that saved his life.

“Had Jake not asked his dad to take the bigger helmet, and Cameron not listened, Cameron may not have survived,” Lukens said. “Had his friend not been there to keep his airways open until emergency crews arrived, he might not be with us today. And the promised blessings of a loving Heavenly Father through a priesthood blessing, I know made Cameron’s full recovery possible, so he could bless the lives of others. It truly was a miracle.”

Arianne Brown is a mom of nine, who writes for many local and national publications. She finds solace at home with her family and logging miles anywhere her feet will take her. Many of her writings can be found by searching “A Mother’s Write” on Facebook. Contact her at ariannebrown1@gmail.com.

Mormon Life Blessings MiraclesBlessings,Miracles,Mormon Life
Comments and feedback can be sent to feedback@ldsliving.com