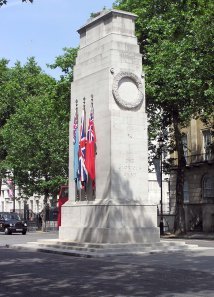 ce·no·taph, ˈsenəˌtaf/
noun
1.
a tomblike monument to someone buried elsewhere, esp. one commemorating people who died in a war.

Today is Remembrance Day in the United Kingdom, Veterans Day in the United States. Yesterday, the Sunday before Remembrance Day, or Remembrance Sunday, my thoughts turned to the religious and public traditions and rituals observed in the United Kingdom to commemorate the importance of this day as a day of national . . . contrition? penance? gratitude? All of them, I think — “celebrate” is the wrong word for what occurs in the public ceremonies that occur on Remembrance Sunday and Remembrance Day. It is a solemn “remembering,” a holy Remembrance, because we remember the lives of those who served particularly in the Great War (1914-1918) but also in all conflicts in the protection of national or territorial integrity and political freedoms and heritage; more specifically, we contemplate the sacrifice that it is to put one’s life on the line for these values and ideals. Very few, if any, “celebrate” that these sacrifices were made or that such devastating wars occurred; virtually all unite across racial, ethnic, and religious divides to remember them and commemorate their sacrifices.