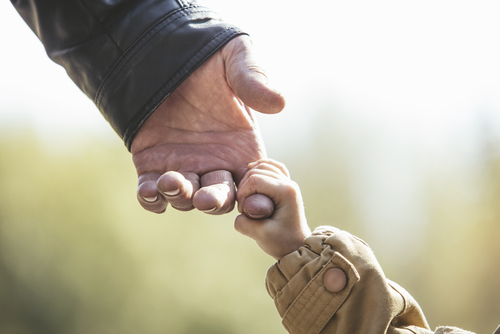 I have only three memories of my grandfather Wilbur Yelvington. One was that he was going to bald. If I stood on my tiptoes, I could see the back of his head when he relaxed in his favorite chair after work. Yup. There was the bald spot.

The second thing I remember was when he came home from the working all day on the railroad (just like the song!), he’d take off his shoes and say, “Carol, come over here and smell my socks.” I did what my grandfather said, sniffing deep, and saying “Eeeeeew,” just to make him laugh. Every time.

The third thing I remember is the day I found him. My grandfather died in his sleep. As a 5-year-old, I went to his bedroom door (probably to smell his socks) and stood looking in at where he lay on top of the covers, asleep, I thought. I can still hear the clicking of Nana’s shoes on the wood floor as she ran in behind me. Somehow she knew he was gone.

► You'll also like: How Family History Work Healed My Relationship with My Mother: "Once My Disappointment, Now My Hero"

She was a widow in her early 40s. She didn’t have an education, not past eighth grade. She wasn’t employable. But she had faith. She believed in God. She pinched and scraped and went without the rest of her life.

My nana was a true believer. She went to the First Baptist Church in New Smyrna Beach, FL, faithfully, my whole childhood and every once in a while I went with her. One Sunday morning my little sister was so excited to get out of church she ran, whooping, headlong into a brick corner, busting her head wide open. That’s the story.

Not only was my grandmother a true believer of Jesus (she taught me to love God and His Son) but she was also the third of five sisters and one brother (who also loved God) and that whole Oliver line got together regularly to eat and sing and play guitars. And tell stories. It was a family that was all about family. All about laughter and, when the terrible times happened, it was a family who pulled together.

I credit Nana for teaching me about God and His love for us. She had us pray over our meals and she taught me, by example, to pay tithing. At age 16, I promised God I would go to church the rest of my life if He’d help my sister and me and our mom. When this prayer was answered, I went looking for a church to attend. I visited several. One Sunday I decided to go into The Church of Jesus Christ of Latter-day Saints.

► You'll also like: How a Small Mission Miracle Helped an LDS Convert Know God's Love for Her

“They have boys who teach about their church,” my mother said before I left to check out this newest religion. “Whatever you do, don’t bring them to our house.”

I wasn’t three steps into the building when the ward mission leader and two “boys” asked who I was and if I interested in learning about the gospel of Jesus Christ.

The three of them looked at each other.

“You can learn about our church at my house with my family,” said the ward mission leader. “Check with your mother.”

Since Mom had not said anything about this, I agreed.

It wasn’t until my mission a few years later that I learned to recognize the Holy Ghost, and so I can’t say, exactly, what clicked with me in those lessons. But I knew this was a church I needed to be a member of. No matter how long it took (more than a year), no matter who I had to go up against (my mother), and no matter if I had to wait till I was 18 to join (I was six months away when I got permission).

There had been opportunities for baptism in other religions. But this time, this . . . this was right.

Only four missionaries were at my baptism. But that was the beginning of me fulfilling what I had promised God 18 months earlier. I would go to church for the rest of my life.

These are a few of my family stories. Every time I write a novel, I reach into the past and pluck something from a truth that’s there. I twist and fold and bend and fatten that idea, then trim and stretch and shape each story until it fits whatever I’m writing. And all my novels, almost always have to do with family.

Family, I saw from my grandmother and all these aunts and uncles and cousins and sisters and brothers, is what life is all about. Family may not perfect, but it’s worth fighting for.

No matter how hard things were, we were always willing to stand up for each other. Eventually, I saw this idea of eternal families. This was a truth. Something perfect, even if the family I had wasn’t anywhere near perfect. I loved these people fiercely. I wanted to be with them forever. And when I went to the temple so I could serve a mission and teach of God’s truths and learn about how to recognize the Holy Ghost, I gave myself a stronger foundation for my life. What we believe as Mormons became more clear: family will always stand up for each other, even on the other side of the veil. This was manifested to me as a child, but I never quite recognized it until I was writing my recent novel, Never That Far, which explores the idea of interacting with and finding strength from those who have died.

► You'll also like: President Nelson: What Happens to Loved Ones Who Die Outside the Church?

As I wrote I remembered something that happened to my sister and me.

Mom was dating someone new and the four of us were at the beach. My sister and I were playing in the surf when an undertow grabbed us. Really. Like hands around our ankles. Before I knew it, we were in serious trouble.

I was three years older and so I was responsible for keeping us both safe, but I couldn’t get my feet on the ground and I couldn’t quite get a full breath. I knew we were going to die. My sister and I took turns climbing up each other, breaking the surface, calling for help and grabbing enough air for the next few moments we were struggling under the water.

As an adult, I still don’t know how I did it. An undertow once dragged a teenager 40 miles north from this very beach we were on. The water hands grabbed us, pulled us but somehow, somehow I turned my back against that current and broke free. Then I reached in for my sister, grabbed two hands of her long hair, and pulled her to safety with me.

That night we lay snuggled close in our twin bed.

“Did you see him?” my sister asked.

“Who?” I was almost asleep.

My sister nodded. “Yes. He was there. I saw him every time I went under the water.”

I swallowed. Closed my eyes. Took my sister’s hand.

I like to think that my grandpa wanted us to live, and I like to think he somehow gave me the push I needed to get us free of what surely should have happened, because living meant many years later, I would be baptized into The Church of Jesus Christ of Latter-day Saints. My sister would join with me, my mother a few months later. After that, a cousin would join. None of that would have happened if my grandpa hadn't saved us from the other side that day in the water.

The dead, I believe, aren’t very far from the living, in fiction or in real life.

Learn more about Carol Lynch Williams in her latest fiction novel, Never That Far, which tells the story of Libby, whose grandfather appears to her the night after his funeral. “Grampa” has a special message for her: that she is not alone, and that there is something special in the lake that can help her and her father in their grief. As Libby and Grampa try to help her father heal from his grief, it will take all of Libby's courage and her gift of Sight to convince her father that the dead are never truly gone.