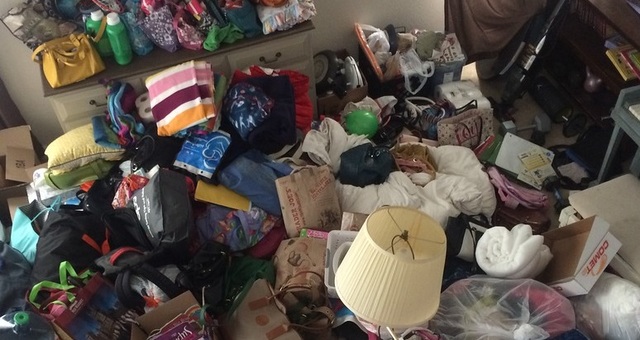 How One LDS Woman Uses Purses to Help Refugees

The year 2015 was a rough one for Hatch. When she attended the women's session of general conference, she was really searching for a way to get outside herself.

"I was blown away by some of the talks," Hatch said. "I remember sitting there thinking, 'Okay, how could I serve in this refugee situation?'"

Like 21st-century people do, Hatch took to Google to find refugees near her home in Phoenix, Arizona. Out of the 10 refugees organizations she found online and contacted, only two called her back.

Hatch decided to work primarily with Welcome to America, a non-profit organization that works with a network of volunteers to gather donations for items like furniture, clothing, and other goods.

Hatch kept her desire to connect with mothers in mind and decided to start her donation drive Goods for Good Arizona, using purses full of hygiene kits.

"I wanted it to be something that was their own," Hatch says. "To have the little necessities that make you human."

And while the hygiene items are expected, the purses were a way for women to connect despite language or cultural differences.

"As I was trying to brainstorm it was like, okay, I'm a mom and I've got a lot of mom-friends. What's something really basic and easy that my mom-friends would jump on and say, 'Yeah, I could do that. That's easy enough that I could do it and it won't disrupt the afternoon carpool.'"

But there was a problem: how could a busy mother of five get the word out about her donation drive?

Then the answer hit her: social media.

Hatch and her sister designed the logo for Goods for Good, then sent out the word on Facebook and Instagram.

By reaching out to her friends across the East Valley of the Greater Pheonix region, Hatch secured eight drop-off sites for donations, ranging from LDS churches to a Fiiz soda shop.

Hatch also recruited the help of Cub Scouts to pass out fliers for the Goods for Good, but she wasn't sure how successful it would be.

By the time her project was over on May 15, she had more donations than she knew what to do with.

"People just went crazy," Hatch said. "That night, the living room, the dining room, and both of the garages were overflowing—you kind of had to find a path. It was just amazing to see the response from people."

When Hatch arrived at Welcome to America with two moving trucks full of donations, there were so many items that the organization had to reach out to other refugee relief agencies and ask if the other agencies could take some of the donations.

But Hatch wasn't done working to help refugees. She decided to volunteer with Arizona Immigrant and Refugee Services, otherwise known as AIRS.

While volunteering there, she was invited to help furnish apartments for refugees before they moved in and provide a few days' worth of groceries. She's even grown close to a family of five from Syria.

"They're amazing," she says. "Every time we go over there, they're like 'sit down, sit down.' They want to make us juice and they don't ever want us to leave and they're so thankful."

Hatch is also working on a donations drive for back-to-school supplies and uniforms for the children of refugees.

She's even working on a website that will help people break down bigger service projects to make them more feasible.

From all these experiences, Hatch says her family has connected from this experience. And personally, it's been a testimony-builder about the healing power of service.