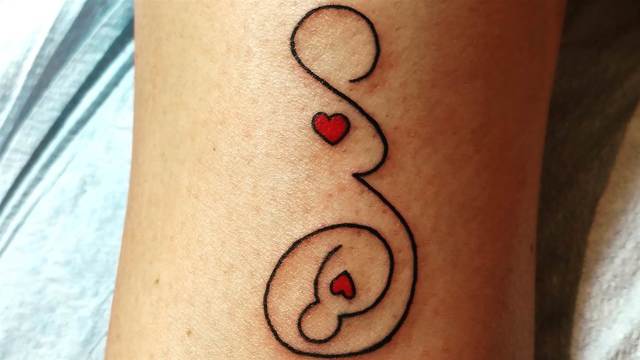 How One LDS Woman's Design Became a Tattoo That Went Viral

Holly Miller Steffen is an LDS mother of four who regularly blogs about her family life.

Six years ago, Steffen created a logo, one that she wanted to be "simplistic and yet powerful," she explains on her Facebook page. At the time, she was already a mother of two and a birth doula, someone trained in child birth who gives emotional and physical support to mothers throughout the entire birth process.

Little did she know that her design would provide comfort and hope to a grieving woman years later in a way that would make the image go viral.

"I designed it to be in the shape of an S—like my last name and in the obvious shape of a pregnant woman," Steffen explains on Facebook. "The single line connects the mommy and her baby. This symbolizes the eternal connection between a mother and her child. The two hearts intertwined in the design further show the loving bond between the two."

In June of this year, 31-year-old Joan Bremer was seven weeks into her first pregnancy when she had a miscarriage. While recovering, Bremer decided she wanted to do something to "remember and be able to heal and move on,” she told SELF. That's when she decided to get a tattoo.

After an online search, she came across Steffen's design and instantly fell in love with it. Now her story of loss has gone viral, being highlighted in TODAY, Huffington Post, SELF, and dozens of other media outlets across the country.

“Losing a baby, even if it's early in pregnancy, is just so difficult,” Bremer told the Huffington Post. “I know there is a certain silence about miscarriages and pregnancy losses, but I am not ashamed that this happened to me. That was one of my motivations for getting the tattoo in the first place—I really think it's healing to be able to talk about it.”

When Steffen noticed her design published all across the internet, she shared on Facebook, "I am thrilled to hear that this logo is resonating with other women like it has resonated with me. It has grown to mean so much more: pregnancy, miscarriage, surrogacy, and beyond. I am grateful to show my design to the world. This is for Motherhood, in all its forms."