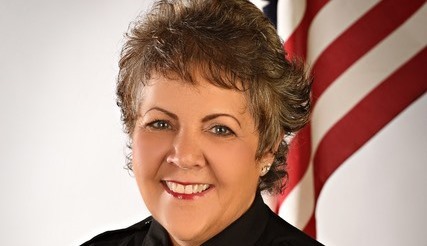 Lisa West has had what she calls a “very non-traditional journey” as a member of The Church of Jesus Christ of Latter-day Saints, but this journey has led her to unique opportunities to connect to the community and build relationships with those of other faiths. As a convert, single mom, and active volunteer in her community, West now serves as a chaplain for the law enforcement of Sacramento County—the first LDS chaplain their unit has ever had.

But becoming a chaplain wasn’t something that happened overnight. As West moved forward with a willingness to serve in whatever capacity the Lord called her to, she was led to discover her personal ministry in life: serving in the community, “comfort[ing] those that stand in need of comfort” (Mosiah 18:9), and reaching those who may never otherwise come in contact with the Church.

From a young age, West had an interest in spiritual things. Though her parents were not devout in any particular religion, she remembers attending the Methodist Church with her grandmother from the time she was 4. Even as a child she had questions. “When they would pass the plate . . . for donation[s], I would say things to my grandmother like, ‘God’s not a beggar. He shouldn’t have to ask us for money; we should just give it to Him,’” West recalls.

It wasn’t until she and her mother began investigating the LDS Church that young West found answers. “There was no question they couldn’t answer or say ‘Don’t worry about that,’” West says. She was baptized at the age of 12.

West married outside of the Church, but her husband was always supportive of her faith and encouraged her to take their two children to church every week. After 17 years of marriage, however, the couple divorced. Though this brought new challenges for West, she relied on her ward family for support and help in providing strong role models for her teenage children. She also found strength by focusing on serving others and teaching her children to do the same. “It was a difficult time, but I felt really fortunate,” she says. “I really instilled in both of them that they had an obligation in life to serve, and however they chose to do that would be completely up to them. . . . The most important thing is that we find ways to serve others.”

Right before the 2002 Winter Olympic Games in Salt Lake City, West was called to serve as stake public affairs director. She dove headfirst into the cause, encouraging people to watch the games as well as learn more about the Church. Shortly after the Sacramento Temple was announced, West was called as the regional media liaison and spokesperson, which catapulted her into even more publicity and community involvement. Though she felt under experienced, she also felt guided as she continued to oversee the temple’s media relations for the next five years throughout the construction, open house, and dedication.

“It really did change the kind of the path that I was on because I really started to get out into the community a lot more,” West says. Though she had always had the desire to serve, she admits that before she tended to keep to her circle of friends. Now, however, she had been challenged to branch out—and she was thriving.

After her release as regional media liaison, West felt inspired to pursue a career change. She began working as the director of marketing and community outreach for a large cemetery and funeral home services company, which allowed her to continue in the public relations field she had come to love. It was here that she met Mindi Russell, a nationally recognized chaplain and director of Law Enforcement Chaplaincy Sacramento.

West remembers Russell saying, “You know, you’d make a really great chaplain, and I’ve never had a Mormon chaplain before.” Though the chaplaincy was completely non-denominational, Russell knew of several Mormons that would be of great service, but they always seemed to be too busy serving in callings within the Church. West agreed that she would consider the opportunity, but hesitated. She had a calling at church and a career that now brought more fulfillment to her life.

One Sunday morning, as she was considering this decision, West was watching the news while getting ready for Church. The reporter told of a woman who was missing from the night before and called for volunteers to join the search party to help find her. West thought, “If the Savior was here, would He go to church, or would He go out and help find this woman? What would He do, and what does He want me to do?” She loved going to church and was very active, but she couldn’t ignore the prompting that today, she needed to go out and serve. So she put on her jeans and went to the site where the search party was meeting. After receiving a grid and instructions from an officer on how and where to look, West searched and prayed for hours.

Though the woman was never found, West came home with a new resolve. “I just felt this overwhelming . . . confirmation that I was supposed to be a chaplain because this is what I could contribute,” West says. “It really was based on what the Savior would do if He were here.”

After completing the rigorous training, West began serving as a community chaplain. Regularly, this service entails giving in-person death notifications and providing emotional support to the family members of victims after homicides, drownings, suicides, car accidents, and other emergencies.

While many people serve because of the warm, happy feelings it brings, West explains that this kind of service is a much different experience. “A 5K for the Alzheimer’s Association is fun, but going out to someone’s home to deliver a death notification is definitely not fun,” she says. As hard as it is, West testifies that the Lord’s hand is in every part of the work she does. “I feel like it’s a privilege to be there for people in what’s probably going to be the worst day of their life,” she says.

In addition to attending officer briefings, West often goes with the officers on “ride alongs,” which are 10- to 12-hour drives that allow officers to talk, share feelings, and work through struggles with a chaplain who will listen confidentially and provide emotional and spiritual support.

West volunteers for the chaplaincy 12 to 15 hours each week and, since she still works full-time, is typically on call on weekends. She devotes her vacation time to going on ride alongs with the officers and attending chaplaincy trainings. Though at times she has been offered payment, she always refuses. “I just can’t do this for money; it just would be wrong,” she says. “I never got into it for that reason . . . I do it because I love people and I want to be of service in some small way to Heavenly Father’s children.”

Being on call on weekends also means that she often wears her uniform to church on Sundays. “I used to get a lot of strange looks in the beginning,” West remembers with a laugh. Although much of her free time is devoted to the chaplaincy, she has continued to be active and very involved in her callings. She currently serves in the stake Young Women program and is a temple history specialist for the Sacramento temple.

Chaplaincy as a Mormon

As a non-denominational chaplain, West does not proselytize in her service, but she still feels that being a chaplain has opened many opportunities to share the gospel. “I feel that my mission in life is to reach those who may never come in contact with another member of the Church or a missionary,” she says. She has had the opportunity to answer questions that other chaplains and community members have asked about the LDS faith. And by simply being visible in the community, she has helped others have a positive impression of the Church and what it stands for.

West points out that as members of the Church, we can sometimes “huddle together” and only serve those within the belief system we share. She believes, however, that this cliquish culture dissolves when we look outside ourselves and get involved in the community. “I just think interfaith connections as well as working outside of your comfort zone . . . [are] extremely important,” she says. West encourages other members of the Church to lead out and model what service in the community looks like.

Though serving as a chaplain certainly isn’t something every LDS person does, West’s experiences have enabled her to touch lives in a way that no one else can. Her story stands as a witness that as we get involved in service both inside and outside of the Church, God can use our gifts and life experiences to bless others in unprecedented ways.