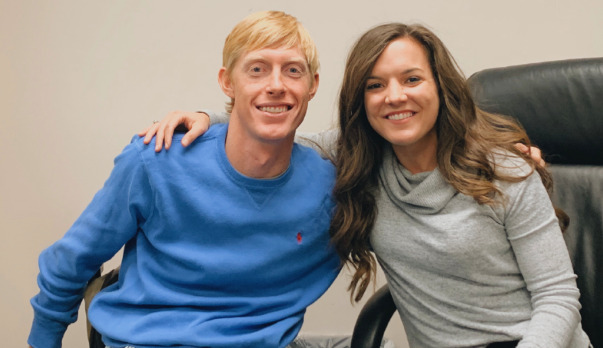 Josh Pack’s life dramatically altered in a split second while making a swimmer's dive at a family reunion that left him paralyzed.  While presently confined to a wheelchair, Pack maintains hope that he will be healed and lives his life with unwavering faith. He is determined to achieve his goals– no matter how impossible they may seem.

Pack’s dream to attend and graduate from college was defined by a single moment on his first day at Weber State. He decided in that moment that he would not let anything stop him from reaching his goal.

“And it was like at that point, I was like, you know what? I'm setting the goal," he says. "It doesn't matter what happens, I'm gonna graduate. I'm gonna get a degree.”

In this week’s episode, All In host Morgan Jones talks with Pack about accomplishing the impossible, maintaining hope and faith through trials, and the healing process.

Morgan Jones: So Josh, another thing that you—like I mentioned before—you didn't let anything stop you from gaining an education. And you told this story about your first day at school at Weber State and I wondered if you could share that.

Josh Pack: Yeah. So it was my first day at Weber State when I had finally figured out how to drive and take care of myself and pull my bookbag off my wheelchair and at least like get to school by myself. I had done a couple of semesters before with the help of a brother. And then also a really good friend named Sean. So there I am, I'm going to go to school like all by myself. And I pull in with my truck and it's the start of the spring semester. So it's the second week of January.

Josh Pack: It's cold. And I hate the cold. My legs hate the cold, I should say, just being paralyzed, they don't like the cold. And so I get out of my truck, and I hopped in my wheelchair, and I'm pushing my chair, it's like 50 yards into the building that I need to get to. And on the asphalt, there's some snow and some ice and just like asphalt cracks. And it felt like every time I would push my wheelchair, my leg with spasm and like come out of the footplate. And I have to grab my leg and put it back in the footplate. I'd take another push and my other leg would spaz out and fall out. So I'd grab it, push it back in. And then I'd hit a pine cone and like the same thing would happen. So it's just like my legs are just, you know, spasming because it's cold. And I'm like, hitting these obstacles and it just was like, I'm never going to make it into school it felt like. And I eventually, like, get into the building. And I looked down at my phone, and I'm 30 minutes late. And it was like, kind of like a little bit depressing to think how am I going to do this realistically? Even just like get into the building to school? And I go into the bathroom. and I don't know whether like to laugh or cry. And it was like at that point, I was like, you know what I'm setting the goal. It doesn't matter what happens, I'm gonna graduate. I'm gonna get a degree.

Morgan Jones: And you not only graduated, but you did pretty well.

Josh Pack: I think just growing up and like being around good parents and good examples and seeing like, creating a good work ethic. But then also, I wouldn't be who I am without breaking my neck. And that like gritty tenacity comes from waking up every day and getting into a wheelchair and into a situation that you really don't want anything to have to be a part of. Like, I'll be honest with you, it stinks, right? Being paralyzed, it's a total bummer. But waking up everyday climbing in that situation and saying, "Nothing's going to stop me, I'm going to go after my goals no matter what." And making that choice every day, kind of builds up and makes you stronger, and helps you develop some really unique attributes.