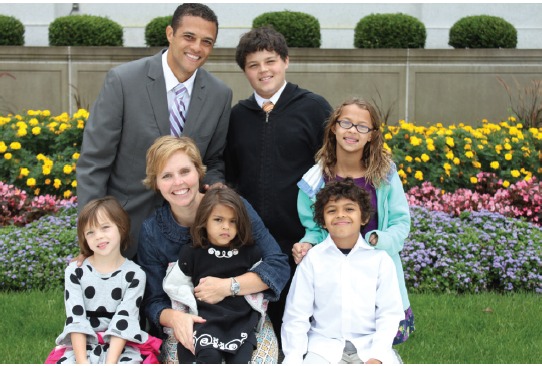 “I feel humble that I’m the one who gets to find these people’s stories and open the door of opportunity for them [in the temple],” Maldonado continues. This new work has helped her develop a connection with her ancestors she didn’t think was possible. “I found one family member who had two or three children, and one only lived a few years. I felt this pain—what must it have been like to lose such a young child?”

Maldonado is a busy mother of four children, ages 1 to 14. How does she find time to jump online for family history research? “I turn the TV off,” she says. “I use the downtime when I would usually relax a half hour before bed. I get so much done in just a short time!”

Now her non-LDS relatives are asking about her discoveries. “It opens up this dialogue,” she says. “It’s given me a natural way to talk to them about my faith. I’ve been away from home for 19 years since I joined the military. Doing family history has brought me closer to living relatives—it’s tightened bonds in ways that are amazing. Doors are open that weren’t open before.”

Heritage was always an important part of Rick Tate’s identity, but he’d never actually researched his family history. His relatives had done temple work back as far as possible: his Grandfather Tate alone submitted several thousand names, so he didn’t see much he could do.

Then, about three years ago, he was called as a bishop. Soon after, the ward council began discussing how to make family history a priority in their ward. “My Relief Society president lovingly chided me that family history isn’t just about submitting names to the temple,” he says. “We have been asked to do something to further the work, whether it’s capturing stories, indexing, or helping other people.”

A natural storyteller, Tate immediately thought of the family stories he loved. Many were connected with an annual extended family reunion he attended at Bear Lake, Utah. “There were a lot of traditions there,” he remembers. “Saturdays we always had sports and activities, lunch, and a program. Then there were stories.”

Once he began delving into family stories, he found himself wondering more about individual lives. Around that time, LDS Access accounts became available. He signed up for all three sites and began looking for records.

“First I found my grandma in the US census. Just to see her listed there in her parents’ household reminds me that she was a real person with a childhood. Then I looked for evidence of the Church in the lives of my ancestors. Some of them made drastic changes to embrace the gospel, and I wanted to know what those changes were. I can see them when I find someone born in a remote village in England who died in Provo, Utah.”

How many names has he submitted for temple work? None—yet. “I thought I had finally found a name—Thomas Umpleby—but when we cleaned up the records, I found his work had been done.” But Tate is persistent. “Now I’m going for his parents. There has to be something there on that line for me to do. There’s something pulling at me, and I’ve never had that feeling before,” he says.

“The task is not really about each of us finding every ancestor,” concludes Tate. “The real task is to turn our hearts to our fathers so they can turn to us.”

Luke Johnson is a high school freshman whose days are packed with early morning seminary, soccer and orchestra practices, Young Men activities, and more. But until recently, indexing was the only family history activity he had tried. Then he was asked to participate in baptisms for some of his deceased Johnson ancestors, and he felt his heart turn.