How Prayers and a Blessing Helped These Men Survive an Avalanche

What an incredible story of faith!

Mike Crowton looked to see a father and son, Chris and Jason Bond above about 20 yards. As soon as he looked, he heard Jason, a very experienced skier, yelling, “Avalanche!” “Avalanche!” As he looked up, he could see that crack in the snow. Without much thought, Mike knew immediately what he needed to do—get out of the way. He quickly dove to his left and buried himself in a cloud of snow. And much to his luck, or what Mike now believes to be divine intervention, there was a large outcropping of rocks, like a cliff or boulder, positioned just above him and close enough that he could dive below them for cover. 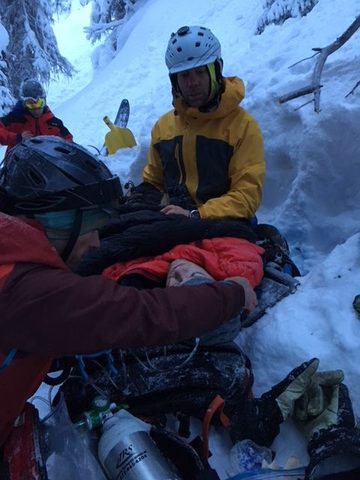 The snow shot right over the top of the rocks. For what seemed like forever the snow flowed over his head and it sounded like a rushing river. But it was all over his head and he was shielded by the large rocks. Those rocks absolutely saved his life. And about those rocks. Mike’s son, Nick, was serving a LDS mission in Sydney, Australia at the time. Mike learned about a week after the incident that Nick was aware of his dad’s ski trip and didn’t feel good about the trip at all. He prayed fervently for his father’s safety that week. Mike and his wife Emily, feel those rocks were positioned in that spot as an answer to Nick’s many prayers that week. Mike feels confident that it was Nick’s obedience, faith and fervent prayers that protected him that day. One of those mission blessings or even miracles that families experience during those two years of missionary service. But Mike wasn’t the only one spared.

Slowly everyone became accounted for, although they were spread out all over. Mike’s cousin, Jake and his friend Jared were down below and they were least responsive.

Read the rest of this story at evalogue.life

Mormon Life Blessings PrayerBlessings,Prayer,Mormon Life
Comments and feedback can be sent to feedback@ldsliving.com