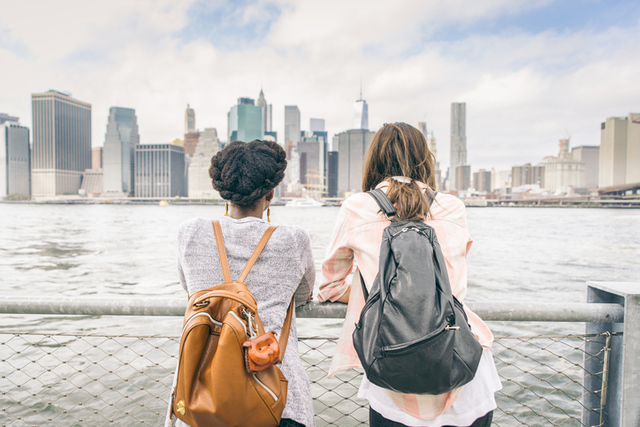 I was at the barber one day in Utah when it came up that I had lived in New York City.

The young lady cutting my hair gasped, "Wow! I've always wanted to visit! It has seriously been a life-long dream of mine. I wish I could go…”

A bit confused, I asked why.

"They don't give you time off?"

"They do, but I have never been somewhere nice. I couldn't afford it."

"Yes…?" she responded, wondering where I was going.

"Cancel it, save the money and you can go in three months. You can even stay at my friend's place to make it cheaper for you," I offered.

"Then watching TV is a bigger dream than going to NYC?"

"No, but I mean, I can't just leave and go to New York. I mean what if I get mugged there? I have to stay here and work. I have to.”

The conversation ended with me leaving her a tip to start her NYC fund.

I kept in touch with her.

Now she could have had other obligations, but I suspect they were mostly just smoke screens—fake excuses that she put up that are holding her back.

Maybe she simply thought that she had to work because that is just what people have to do.

Or hey, maybe she was just making conversation and didn’t really want to go (although, based on her excitement, I sincerely doubt it).

On the other hand, my wife has a very different mindset.

When she graduated high school, all of her friends were going to college and her parents were encouraging her to go as well. Instead, she took a year and worked at a leprosy colony in India and as a nanny in Italy. Then she went to college. She still got the education she wanted, even though she was “behind” by traditional social standards.

She realized, that everyone lives (or should live) life in the way that’s best for them. And if that meant she wanted some life experiences across the world first while her friends wanted to go to college first, that was just fine (I only hope that her friends didn’t go to college just because they felt they had to). My wife went at her own pace and guess what? She is now running her own business and very happy.

Go figure…her life didn’t end because she didn’t do what everyone else was doing.

Why don’t we do that more often? Why do we go with the flow of everyone around us and never take the chance to find dreams and live them?

Why don’t we realize that life isn’t a 1-, 2-, 3-, 4-, or 5-star restaurant with limited items called “destiny,” but rather that it is a kitchen with an unlimited supply of ingredients for you to make it whatever you want?

There are three main emotional barriers that we put up that hold us back: fear of the future (self-imagined), present limitations (self-inflicted) and rules from the past (self-imposed). Like the woman who cut my hair. She was scared of an imaginary future of getting mugged, she didn’t let herself take a vacation now, and since she hasn’t been able to afford anything nice in the past, she is stopping herself from imagining a different future.

When we do things because we feel they have to be done, we are imposing upon ourselves fake rules that we have to do something, when in reality, if it didn't come from a divine source, we don't have to do anything.

You don’t have to do anything.

My barber friend didn't have to keep working. She could have used her time off to fulfill her dream of visiting New York.

My wife realized she didn't have to go to college right away. She gained experience serving others in a different part of the world.

You don’t have to get married young. Take your time to date and get to know people.

You don’t have to rely on someone else’s testimony. You can pray and find out for yourself.

Moral of the story? If there is something you really want in life, figure out a plan to do it, and go do it!

Who are you to keep yourself caged up?

Sure, we all have different responsibilities and there are parts of reality that we can’t just eliminate—I’m just saying that most of the things in your “have to” column, really should be moved to your “most people just do it this way” column.

Turkish philosopher and advocate Harun Yahya has been quoted saying, “I always wonder why birds choose to stay in the same place when they can fly anywhere on the earth, then I ask myself the same question.” #micdrop

You don’t have to work just to work.

You don’t have to go to college right away if there’s something else you feel you need to do first.

You don’t have to skip that study abroad because you’ll finish school faster if you don’t go.

You don’t have to give up starting that side business just because there is some risk.

You don’t have to give up writing that book.

Indeed, you don’t have to do anything.

Seeking the path that aligns with the masses never leads to innovation, discovery, or passion. Or said another way, “the road to success is usually off the beaten path” (Frank Tyger, NY Times cartoonist for 34 years).

Truly, adventure, progress, and ‘differences’ of life are found on the “path less traveled” (Robert Frost, “The Road Not Taken”).

So step up and step out of line.

Discover your dreams and travel your paths to achieve them.

And maybe along the way, you can find your place in making this world a little bit better.

But then again…you don’t have to.

“Seek not for riches but for wisdom, and behold, the mysteries of God shall be unfolded unto you, and then shall you be made rich. Behold, he that hath eternal life is rich. Verily, verily, I say unto you, even as you desire of me so it shall be unto you; and if you desire, you shall be the means of doing much good in this generation” (D&C 6:7–8).

Read more from Zach Oates in his book, Dating Never Works. . .Until It Does, available at Deseret Book stores and deseretbook.com.