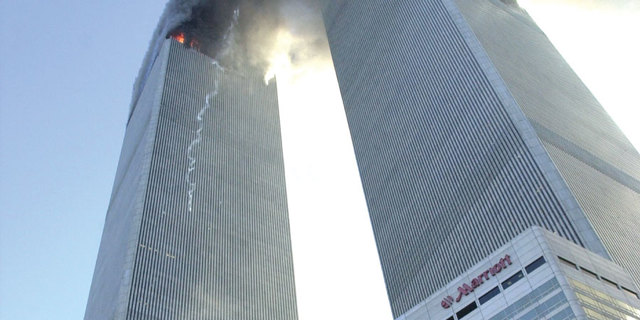 In the lobby, three Marriott associates gathered with walkie-talkies, as they had often practiced, to coordinate an evacuation—Rich Fetter, resident manager; Joe Keller, executive housekeeper; and Nancy Castillo, head of human resources for both the WTC Marriott and Financial Center Marriott. Several alarms were already sounding in the hotel, and the guest elevators automatically shut down. Unable to use the computers, Fetter found the last guest-list printout and gave it to Castillo for reference. He then dispatched associates to conduct a room-by-room check to make sure the guests were evacuating.

No one in the hotel could tell what had happened to the north tower because the gaping hole and fireball were not visible from any Marriott vantage point. But most of the guests knew enough to get out, using the stairs. However, Leigh Gilmore, a 42-year-old woman from Chicago with multiple sclerosis who was dependent on her motorized wheelchair, could do nothing but huddle with her mother in her fifth-floor room. Then a second plane, American Airlines Flight 75, struck the south tower at 9:03 a.m. Minutes later, two Marriott maintenance men found the Gilmores and rushed them onto a freight elevator to get them to safety.

By this time, the Marriott had also become an evacuation portal for those fleeing the Twin Towers through the door that connected the hotel to the north tower. Companies of firemen and Marriott staff directed more than 1,000 frightened people through the lobby to an exit onto Liberty Street. Debris and bodies were still dropping from above, so a policeman stood at the exit door to hold up the line sporadically when falling objects were spotted. Because of that corridor of safety, the Marriott hotel saved many lives. 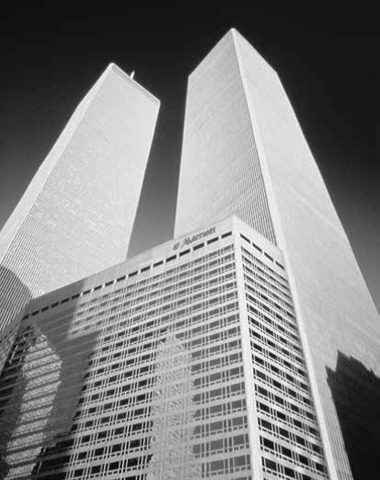 A year later, the New York Times heralded this effort: “It was only a hotel, a 22-story dwarf tucked under colossal buildings, but in its final 102 minutes, the Marriott Hotel at 3 World Trade Center served as the mouth of a tunnel, a runway in and out of the burning towers for perhaps a thousand people or more [because] a cadre of unsung Marriott workers, from managers to porters, stayed behind to make sure their guests got out.”

One of those selfless heroes was audiovisual manager Abdu Malahi, who was last seen checking rooms for guests on the hotel’s upper floors; he died in the courageous effort.

In his 19th-floor room at the WTC Marriott, guest Frank Razzano thought he was safe. The Washington, D.C., lawyer assumed firemen would put out the high-level conflagration, and he thought he had plenty of time to leave the hotel. He showered, shaved, and packed his belongings and legal papers. He was about to call for a bellman to pick up his luggage when the south tower, after burning for 56 minutes, collapsed at 9:59 a.m., registering 2.1 on the Richter scale.

The 10-second collapse occurred inside a veil of smoke, so it appeared that the building simply imploded, falling straight down, but that was not the case. The top 30 or 40 floors broke off, pivoted, and fell eastward onto a neighboring office building. Other sections were propelled northwest toward Battery Park, while a few sections landed on the WTC Marriott, cleaving it in half. As this curtain of concrete and debris fell past his window, Razzano hugged the wall next to the door, certain that these were the last few moments of his life. Have I led a good life? Would my parents be proud of me? he wondered.

Moments before, in the lobby, Marriott associates were talking with each other and the firemen, pleased that the evacuation seemed to be nearly complete. Joe Keller had managed to reach his wife, Rose, and reassure her that he was just fine, but she urged him to leave. She recalled: “He told me that he was evacuating the people, and I selfishly said, ‘You get out.’ He said, ‘I’ll leave here when I can.’”

At the moment the tower fell onto the hotel, Keller was at the bellhop station talking to Rich Fetter, who was less than 15 feet away. The immediate pressure from the impact lifted everyone into the air and carried them through the lobby. Fetter was caught by a fireman, who pulled him to a column and hugged him close. “I flew from the middle of the lobby to the corner,” said Amy Ting. “I couldn’t see. All I could hear were things crashing—it was like death had just passed you by.”

When the remaining firemen’s flashlights flicked on, there was no sign of Keller or the other firemen behind a wall of debris. Reinforced beams installed in the hotel following the 1993 World Trade Center bombing had shielded a portion of the lobby from the crushing weight of the collapse. On-scene firefighter Patrick Carey said: “It was like the building was severed with scissors. If you were on one side of the line, you were okay. If you were on the other, you were lost.”

Keller was on the wrong side. But he was still alive.

Fetter managed to reach him on their walkie-talkies.

“I’m in an air pocket. I’m on a ledge. There’s a big hole, and I can see down to the lower levels of the hotel. Shouldn’t be able to do that. There’s two firemen in here with me and they seem to be hurt bad. I can’t get to them.” The firemen on the “safe” side of the lobby ordered the remaining trio of Marriott associates to evacuate immediately, and they began digging through the debris to rescue those on the other side.

Meanwhile, the same reinforced I-beams had saved not only Razzano but also, in the southern stairwell, 13 firemen led by Jeff Johnson of Engine Company 74. A single, narrow slice of the Marriott had survived. Razzano and the firemen found each other, and together they made an agonizingly slow 30-minute descent down the stairs over and around blocking debris. They were at the second floor when the north tower collapsed at 10:28 a.m. after burning for 102 minutes.

The rest of the Marriott hotel was crushed, as was everyone left inside, including Joe Keller.

Miraculously, the men in the southern stairwell, which was now crushed to about the third floor, were still alive. Recalled Razzano, “I heard what I can only describe as a freight train coming at me out of the sky, and then debris started to fall down on top of us.” Fireman Johnson remembered thinking, “Please don’t let me go like this. I’m too close.” All 14 subsequently made it out—the only people known to get out after the collapse of both towers.

Bill Marriott set up a crisis center at headquarters that was staffed around the clock in the first days after the attack. Flaming debris from one of the towers started a raging fire in the building next to the Marriott Financial Center hotel, so firemen used the hotel for more than a day as a staging area to fight the fire. Windows were broken, and there was water damage throughout the hotel, requiring its closure.

The loss of life was, of course, far more impactful. When an accounting was later taken, it appeared that at least 41 firefighters who had been trying to clear the WTC Marriott died when it was obliterated. Eleven of the 940 registered guests at the Marriott were unaccounted for and may have been among the numbers who died in the adjoining towers.

Within hours of the collapse, Bill called the families of Joe Keller and Abdu Malahi.

“I was deeply saddened by the loss of our men who, like their many colleagues that day, exhibited such bravery and dedication in the face of horrific tragedy,” he later wrote.

At the time, he told Fortune magazine: “This is the most difficult thing I’ve experienced in 45 years of business.”

On September 20, Bill was in New York to speak to his shell-shocked employees: “So many of you performed unbelievable acts of bravery in getting people to safety after the collapse of the towers—literally guiding people across steel girders that were all that was left of the lobby floor. Some of you remained at the hotel searching for coworkers and guests until firefighters forced you to leave when it was too dangerous to remain. I’ll never forget all you’ve done here. You’re all heroes in my eyes.”

Bill announced that all workers from the affected hotels would be covered by the company’s health insurance for a year. All of them would remain on the payroll until at least October 5. After that—because of the generosity of 1,500 Marriott associates donating more than $2 million of their vacation pay—all of them would be paid for a few months more. From his own family foundation, Bill wrote a $1 million grant to pay for survivor family expenses not covered by various federal and state emergency and relief organizations.

Five days after Christmas, a worker at Ground Zero found in the rubble the Marriott flag that had flown over the WTC Marriott. It was a bit burned, tattered, and torn. When it was delivered to Bill at headquarters, he said he would donate it to the projected 9/11 museum. In the meantime, he directed that it be displayed in a glass case in the lobby at headquarters so every visitor would see it when coming through the main door. Intended to honor the heroism of all Marriott associates, the plaque beside it read:

Our Spirit to Serve 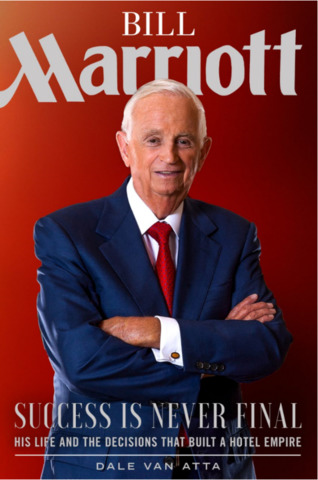 Bill Marriott, son of J. Williard Marriott who opened a root-beer stand that grew into the Hot Shoppes Restaurant chain and evolved into the Marriott hotel company, grew up in the family business. In his more than fifty years at the company’s helm, Bill Marriott was the driving force behind growing Marriott into the world’s largest global hotel chain.

Bill Marriott: Success Is Never Final gives readers an intimate portrait of the life of this business titan and his definition of success. Bill shares details about his private struggles with his father's chronic harsh criticism; his innovations in the hotel industry; and the boundless passion and energy he demonstrated for his work, family, and faith. Bill also shares spiritual experiences that allowed him to recognize God's guidance in his personal life.

This fascinating biography tells the story from Bill Marriott's first job in his family's restaurants to his monumental decisions in building a hotel empire. It is the remarkable story of a man who had the vision to create a multi-billion-dollar business, who understands the power of giving through substantial philanthropic work, and who lives the creed that hard work will pay off but success is never final.