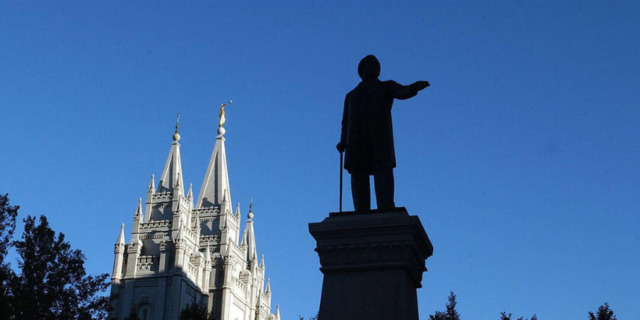 Brigham Young was lying in the bed of a wagon, having been severely ill for the last twelve days, when he saw the valley for the first time.1  He was forty-six years old, short and quite stocky, a carpenter by trade and physically robust; but “mountain fever” could put even the strongest men flat on their backs. Several diseases fell under that generic name because they all produced high fever, severe head and body aches, deep pain behind the eyes, chills, nausea, and vomiting. Colorado tick fever was one of the least severe of these illnesses, usually passing in a few days after the onset of the symptoms, but Brigham had been down for almost two weeks, suggesting that he may have contracted the more serious Rocky Mountain spotted fever. If so, it was remarkable that he was still alive. That strain persisted for weeks, and the fatality rate was high owing to the inflammation of the heart, lungs, and brain or the kidney failure it produced. The only known treatments were home-brewed remedies and rest, but sleep was hard to come by in a wagon on the plains. Summer days were bright and hot, and Brigham would have felt every bump in the road as the wooden wheels rolled over the uneven land. And he wasn’t alone in his suffering. Thirty-seven other Latter-day Saints traveling with him had also contracted the fever—a full quarter of the company. But they did not have the luxury of time to grant the sick much rest.2

They’d needed 111 days to cover 916 miles from their last home in Winter Quarters, just across the Missouri River near present-day Omaha, Nebraska. That worked out to an average pace of just over eight miles per day, and that was threatening to create a crisis. More wagon trains were following and would arrive in staggered numbers throughout the late summer and early fall—too late to plant enough crops to carry the Saints through the winter. Those who reached the valley first needed to start up the farms that would feed everyone else coming in behind. They had to grow a large amount of food in a short time, and everything they’d heard about the Salt Lake Valley suggested the land there was no good for farming. Explorers had been mapping the region for decades, including famed trapper Jim Bridger, who had first seen the Great Salt Lake in 1824; and John C. Frémont, who had explored the area just a few years before. Their published reports suggested that the Saints’ destination was a barren place with few trees and little useful vegetation of any kind. A mountaineer by the name of Goodyear met the company while he was heading back east and shared his recent tale of having just wintered north of the valley. He “had tried the experiment of sewing [sic] grain and vegetables in a small way. But he too, was unable to give . . . any hope; on the contrary, he told of hard frosts, cold climate, difficult to produce grain and vegetables in any of this mountain region.”3  The Saints were undaunted. They had faith and were hard workers, always a potent combination, and their labor supply would receive regular infusions of fresh strength. It was their supply of time that was shrinking. This lead company needed to break ground soon or the winter of 1848 would be a hungry one for hundreds of people.

Then, on July 12, the mountain fever struck Brigham when the company was still 116 miles outside of the valley, near the present-day border of Wyoming. Rather than hold up the entire company while the sick members recuperated, Brigham ordered Elder Orson Pratt to take a group of forty-two men and push ahead the final 116 miles. They were to cut a road through the timber and brush in the canyons, find a site in the valley to settle, and start planting.4  Pratt’s advance team reached the valley on July 21 and found a suitable location to start farming. The main body of the company, which hadn’t given the sick members much time at all to recover, joined them by nightfall of the twenty-third. Only Brigham and the other sick travelers were still straggling behind as Pratt’s group tried to break ground and start planting crops on the twenty-third. On the morning of the twenty-fourth, Brigham and the last of the company finally were closing in on the valley. The thermometer read ninety-six degrees Fahrenheit.

The driver of Brigham’s makeshift ambulance was Wilford Woodruff, another member of the Quorum of the Twelve Apostles. Forty years old and a fellow New Englander—he’d grown up in Connecticut—he may have felt a particular empathy for his friend’s suffering. “Spotted fever” had killed Wilford’s own mother in 1809 when he was fifteen months old. But all he could do to alleviate the discomfort Brigham was enduring in the back was to reach their destination as quickly as the trail would allow. The end was close, and Wilford spurred the horses on until they reached “Big Mountain.”

Brigham, though still sick, was equally moved by the sight. “I ascended and crossed over the Big Mountain, when on its summit I directed Elder Woodruff, who had kindly tendered me the use of his carriage, to turn the same half way round so that I could have a view of a portion of Salt Lake Valley,” he later wrote. “The spirit of light rested upon me, and hovered over the valley, and I felt that there the Saints would find protection and safety.”6  According to Wilford, Brigham’s actual words were less eloquent. Brigham pushed himself up with some effort, supporting himself on his arm, and he looked out at the valley opened up before them for several long minutes. “It is enough. This is the right place,” Wilford recalled him saying. “Drive on.” Then he lay back down in the wagon and Woodruff urged the horses forward.7

So it was that the man who would begin the forty-year construction of the Salt Lake Temple and the man who would finish it, both future Presidents of the Church and prophets of the Lord, entered the valley together—one driving the wagon, the other stretched out in the back, a weak and bedridden passenger.

From the chilly February day in 1853 when the prophet Brigham Young drove a shovel into the soil to break ground for the Salt Lake Temple until its dedication in 1893, members of The Church of Jesus Christ of Latter-day Saints were confronted with political hostility from the US government and severe challenges imposed by nature itself. Some of the nineteenth century's greatest events affected this monumental temple-building project, including the California gold rush, the Civil War, and the construction of the transcontinental railroad. The Saints tangled directly with five US presidents, Congress, the Supreme Court, Johnston's army, and hostile governors, biased judges, and zealous marshals determined to impose the federal government's will on the Utah Territory. Despite these hardships, the Saints moved forward with faith to complete the temple that would become a symbol of their determination to serve the Lord.

This enthralling book, written by master storyteller Mark Henshaw, tells the narrative of the building of that iconic temple—a place of worship and refuge forty years in the making. Forty Years: The Saga of Building the Salt Lake Temple is available now at DeseretBook.com.