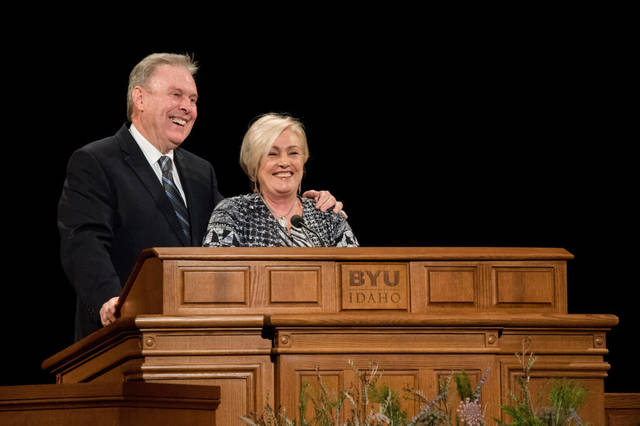 How Working at McDonald's Led This Church Leader to the Gospel

As young students at a university, Terence M. Vinson and Kay Carden met while working at a local McDonald's.

“We met and started to talk about our lives and about religion,” Sister Kay Vinson recalled during a BYU-Idaho devotional on Sept. 25. “And I said I was a (member of the Church).”

The two would often discuss their views with each other.

“I had never before heard of this Church of which she was a member,” said Elder Vinson, who is a General Authority Seventy and serves in the Presidency of the Seventy. “Having grown up as a Catholic, and having embraced that religion, I felt that, in order to accept the teachings of The Church of Jesus of Latter-day Saints, I needed to be totally convinced intellectually that my previous … beliefs were mistaken and that these new teachings were truly teachings of the restored gospel that Jesus Christ had previously established.”

Eventually he decided "they" needed to figure out what church was the right church to attend.

“He came up with a plan,” Sister Vinson said. “We would attend mass and we would attend sacrament meeting and after a while we would determine which church is true.”