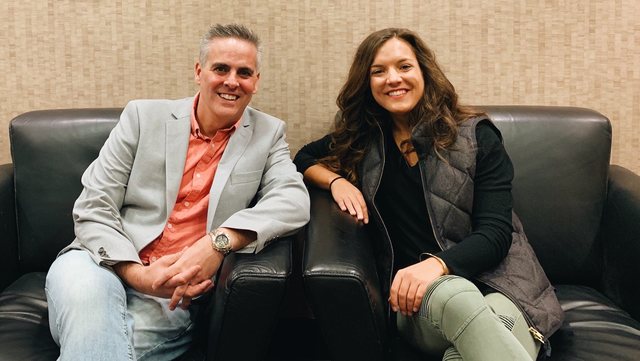 On this week’s All In podcast, author Jason Wright shared the story behind his first novel, a novel that went on to become a New York Times bestseller. The fictional story, Wright explained, began because he missed his father, who passed away when Wright was 16 years old. In an effort to cheer up, Wright and his family began putting their spare change in a jar. The week before Christmas, they decided on someone who might benefit from receiving their “Christmas Jar.” Their little jar brought joy to Wright’s family and began a tradition—a tradition that led to Wright’s first novel, Christmas Jars, which has been turned into a film premiering this year.

In the excerpt below, All In host Morgan Jones thanked Wright for the idea, as it is a tradition that has blessed her family’s Christmas for years.

Read their conversation about the creation of Christmas Jars below or listen to the episode in its entirety here. You can also read a full transcript of the episode here.

Morgan Jones: I am excited [to talk to you] partially because of Christmas Jars, since your book came out, was it in 2005? Since then, my family has done Christmas Jars as a tradition in our home. And it was funny because yesterday, as I knew that I was going to be interviewing you—I should have shown you this video before we started recording so that you can appreciate how funny it is—but I texted my family and I said, “I'm going to have Jason Wright on the podcast tomorrow. Text me funny memories that you have from our doing the Christmas Jars.” And my sister sent this video of our drop-off last year, and my little sister runs up to the door with my brothers-in-law, who are, like, very intense about their drop-off. And so she runs up to the door, and they start running back. And of course, the boys are faster than she is, and the person starts coming out the door and Natalie, my sister, just hits the deck. Like, on the front lawn. And then you hear voices in the video, and they're like, "Where's Natalie?" Because my brothers-in-law are like, "We lost Natalie somehow in this transaction." And then all the sudden her little head just pops up. And then, game over. But it's been a tradition that we've loved, and we look forward to it every year. And I feel like we have you to thank for that. So first of all, thank you.

Jason Wright: Well, you're very kind. And I'm so glad to hear that. And I know there are people listening today who probably have had similar experiences giving jars away. And that means a lot more than a book and a movie and all the things that have happened over the last decade-plus. That's all great, but really what's most important to me is hearing that people have put the movement kind of to the test in their family and have given a jar away. I mean, what's better than that, for an author to know that I created something from my strange little noggin that has turned into a family tradition for someone like you and yours? So that's pretty cool.

Morgan Jones: Yeah, absolutely. So I'm curious, how it did form in your noggin? How did you have that idea?

Jason Wright: Yeah, great question. So my noggin was a little down. I was struggling a little bit in October of 2004. And my father passed away when I was in high school, when I was 16, right before Christmas, so the holidays have always been a little bit of a blue time, and a lot of folks listening can relate to that. Depression and anxiety really go up through the roof during the holidays for many, many people. So I was just, kind of, struggling a little bit with missing my dad, the holidays, and the rush, and the hustle bustle. When you're in mid-October, it hasn't quite hit yet, but you know the storm is coming—parties and commitments and cookies and all the things that you do during the holidays that can be a distraction from what Christmas ought to be. So I'm having a conversation with my wife, again, it's about the second week of October, late one night, kids are asleep. I'm walking her through some of these feelings I'm having, and this kind of just meatloaf of like, "What is wrong with me, and why am I struggling to enjoy more fully the color of Christmas?" So we kind of, compressing a very long story, but the conversation ended that night with, “What if we put a jar on the counter and we put our change in it? And what if every time we dropped change in that jar, we committed to one another and to the kids and the kids to us, that we would think about the needs of someone else? Even if it's just two or three or four or five seconds, every day between that night in mid-October and Christmas Eve? And what if we could generate $50, $60, $70, $80 in change over the course of about two months? And what if there were a family in our circle of influence from church or school or the neighborhood for whom that amount of money would be just what they needed, the answer to a little prayer, a little miracle in their life?” And thus it began, and we began to fill that jar. And me in particular, as being the one in the family that most needed the lesson that Christmas didn't need to be treated as a 24-hour holiday that we open and close and put back on the shelf. But I could think about the needs of someone else and ultimately, about the great gift of Christ in my life and Christmas, every single day. And so on Christmas Eve, we sat down as a family, my wife and my two daughters [who] were 8 and 5 at the time, and then we had a baby boy. And we made a list, just like you might imagine in a movie, we sat down with a pad and wrote down half a dozen families that we thought could benefit from this. We selected a family that actually belonged to our ward. And we knew that this wouldn't change their lives necessarily. It's not enough money—it was $88 that first year. No one's paying off their house or medical bills with 88 bucks, but we thought it might make a difference. And I won't take the time to tell you the whole story, but I will tell you that the experience of getting that jar away is one of the anchor memories of my entire life. And it changed me, it changed our family, it changed the way we think of Christmas in our home. And we woke up the very next morning and my kids were like, "Let's do that again. Like, we want to fill another jar." And so we did. And now, we're filling a jar for a full year. And during that full year, we're in 2005 now, I began to kind of ask myself, like, "Our family was changed by this, could another family be changed by a similar experience?"

And so, back to the noggin, I started to think, like, "Could I fictionalize this? Could I take just a little nugget of our experience and turn it into something a little bigger and a little better and a little brighter?" And so I began to imagine this story of a young reporter with no family to speak of and not a lot of hope, but whose name was Hope. And, well what happened is she got a Christmas Jar and became obsessed with uncovering the origin of the movement. Who gave the first jar away? Where did it all begin in her community? And it started, I never talk about this, truly, but it started as a five-page short story called "Christmas Jars and Restoration." And then it evolved over the course of a few weeks into a 25,000-word, 120-page little novel, and no one wanted to publish it. I had 20 agents tell me "No," "No," and "No." One agent said to me—this is a true story—I have an email where this agent in New York said, "Thank you for your submission. I really liked the concept, I just wished someone else had written it."

Jason Wright: Yeah, that stung just a little bit. And so at the edge of giving up, my wife kind of encouraged me to just bypass the traditional agent-publisher kind of route, and to just fire it off to some publishers. So I did. And a miracle of miracles, the right people at Shadow Mountain, which is a part of this beautiful Deseret Book, LDS Living family said, "There might be something here." And that was April of 2005. And by September, the little book was appearing in stores around the country and families like yours were saying, "Gosh, I want to do something with this." And here we are.

Find a "Christmas Jars" movie showing near you here.