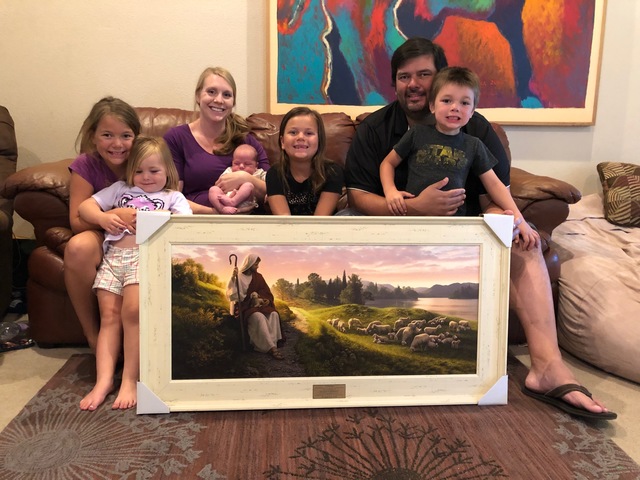 "To appoint unto them that mourn in Zion, to give unto them beauty for ashes, the oil of joy for mourning, the garment of praise for the spirit of heaviness; that they might be called trees of righteousness, the planting of the Lord, that he might be glorified.

The wildfire that burned through Paradise, California, in 2018 was the most violent in the state's history. With the containment taking nearly two weeks, the blaze destroyed nearly 15,000 homes and took 86 lives.

The disaster’s long-term effects have been harrowing.

A recent report from USA Today estimates that Paradise lost 90 percent of its residents in the wake of the disaster. John R. Meyer, a local stake president for The Church of Jesus Christ of Latter-day Saints, believes the loss of friends and neighbors is one of the most difficult repercussions the tight-knit community has had to face.

"People have grown up there; they know their neighbors,” he says. “And I think that is why so many people survived, because they got their neighbors into their car and brought them off the ridge."

Now many of these neighbors are gone, scattered from Idaho to New York.

For those who remain, rebuilding hasn’t been easy. PTSD and displacement have impacted many survivors, transforming old, familiar sights into traumatic or sinister triggers.

"At Christmastime, when the Christmas lights were blinking, there were children here who wanted the lights off because they are in their bedroom, and they see the lights flash, and they think it is a fire," Meyer says.

Getting mental health services and counselors to help the community was essential in the recovery process, Meyer explains.

"I think a big part of it is just processing what happened and dealing with the post-traumatic stress symptoms afterward, and, secondarily, losing all of their possessions, mementos, and family heirlooms and everything," says Brian Herring, a local stake high councilman.

And while most people are now settled, those needed physical reparations have taken time. Even today, nearly a year after the fire, some are still trying to piece together what’s left of their old lives.

Deseret Book employees at the store in Sacramento shared touching recollections of helping many of these members replace their most cherished possessions: their temple clothing.

"I recall the day after the fire started, the very first customers we had was an older couple—who still smelled of fire—and with tears, [they] shared how their home and all their belongings were burnt to the ground, but the first thing they knew they wanted to do was to come and buy garments and temple clothes so they could go to the temple," recalls Chelynn Hutchison, the store manager. "I remember, after helping them, going in the backroom and just crying, seeing the faith of this dear couple." Another couple who came in to replace their temple garments and temple clothing told Hutchison, “The fire can burn all we own, but it can’t burn our testimony.”

A store supervisor, Kelly Davis, noted how these Saints cherished their temple recommends as their most prized possessions. "Many tears were shed as they were replacing their temple clothes," Davis says, "One sister realized that she wouldn't have the temple dress that she was married in or ceremonial clothing that was passed down from her grandmother. But . . . this sweet sister said, 'Oh well; it's just stuff.'" Local Latter-day Saints flooded the Sacramento store purchasing scriptures, garments, and temple clothing to send to those who lost so much in Paradise.

The fire took schools from the children, churches from the faithful, and homes from nearly everyone.

► You may also like: How One Latter-day Saint’s “Inspired Act of Service” Is Blessing Lives After the Paradise Fire + How You Can Help

Despite all this, unexpected blessings have come throughout the recovery process.

"It’s a combination. You got happy moments and really sad moments; it goes between the two," Meyer says. "On the positive side of the scale . . . ministering is now just a way of life as opposed to an assignment or a task. It really is something that just permeates across our entire organization."

Help has come from outside as well. Stakes in Washington donated instruments. And more recently, a stake from Othello volunteered to come down to Paradise for a week and provide service.

Their message? "We have not forgotten you."

"Our community has received so much," Meyer says. "All of these things cause our community to be in a receiver mode, and it’s pretty touching how kind, generous, and thoughtful people are, and it is a tender thing to be constantly on the receiving side."

► You may also like: A Prom for Paradise: How a Latter-day Saint Teen Organized a Dance for the Students Who Lost Everything

President Meyer received clear direction from Heavenly Father about what the people needed: “They don’t have a home yet, but when they do, a picture, particularly of the Savior, would be a significant blessing.”

So when Sheri Dew, the executive vice president of Deseret Management Corporation, called and asked how she could help, Meyer had a very specific answer.

“The kind of funny thing about all of this is she asked me how many, and I, off the top of my head, said, ‘Well, it’s probably about 400 people,’” Meyer says.

The original idea was to have enough small paintings to distribute to the Primary children affected by the fire. Instead, they got something much larger. Chapters of Hope, a non-profit operated by Deseret Book that has provided over 50,000 books and uplifting media for impoverished children around the world, made a special delivery to the stake.

“What showed up were huge paintings, 400 of them, in a big Fed-Ex truck, [and they] required a forklift to remove,” he says. 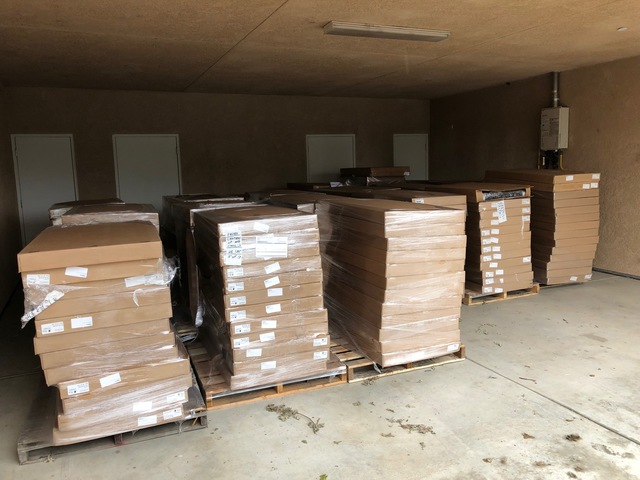 The delivery included four paintings, Dear to the Heart of the Shepherd and Lead Kindly Light by artist Simon Dewey and To the Rescue and Sacred Grove by artist Robert A. Boyd. 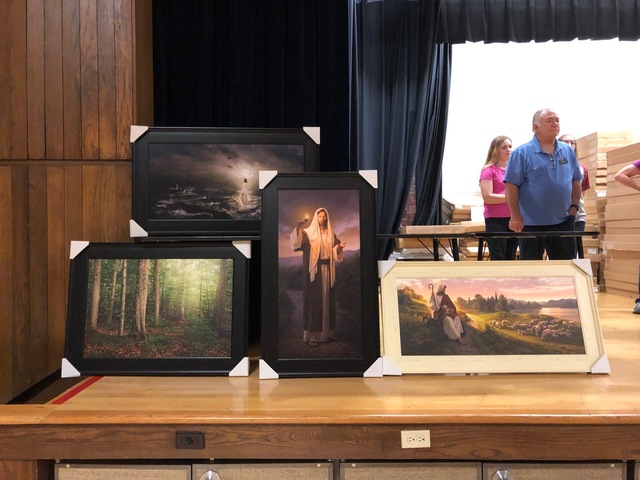 “The paintings are beautiful,” Herring says.

That initial call between Meyer and Dew took place months ago, and the stake has delivered the first 300 paintings, and the rest will be distributed in the next few weeks, but the effect they’ve had on the community thus far has been extraordinary.

People came to the stake center to pick up their paintings, and many members got to see and talk with friends who they hadn’t seen since before the fire.

► You may also like: Listen: The Miracles That Helped a Family Find Each Other After Being Separated During the Paradise Fire

Asking for the paintings was one of many promptings Meyer received after the fire, witnessing to Meyer that Heavenly Father has clearly not forgotten His children in Butte County.

“Nothing is superior to specific instruction from the Lord,” Meyer says.

Each painting is adorned with a plaque inscribed with the words, “A gift from The Church of Jesus Christ of Latter-day Saints #Camp Fire 2018.” 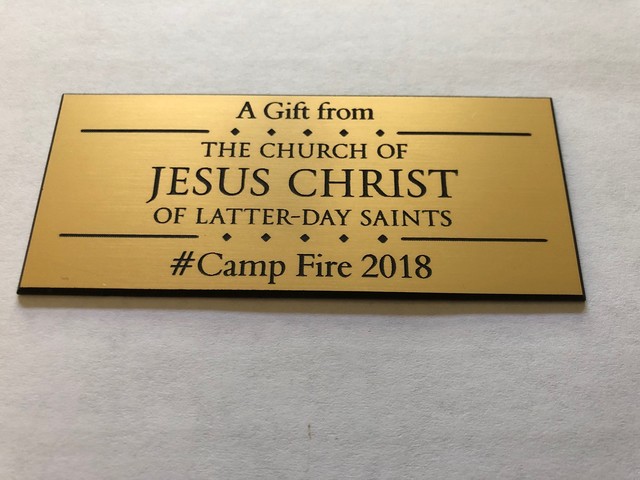 “For a lot of these families and individuals, especially the displaced people, it’s possibly a little bit of closure, part of their healing process,” Herring says. “For a lot of people, it was just a token or a symbol of the healing that’s starting to begin, and hopefully tying that into the gospel and the Atonement.”

Meyer worked with the local mission and branch presidents to find new homes for any excess pieces of art.

They eventually decided to give some to those who had provided temporary housing to people displaced by the fire as well as local churches throughout the community.

Elder and Sister Perry, a senior missionary couple, were called to assist in the recovery effort and were subsequently tasked with contacting other churches in the area to provide assistance to community members. Each of these churches received a painting as a thank you for their efforts, and these gifts have served as reminders of the community's shared suffering, service, and faith.

"The pastors, when they received these paintings, there is a feeling of gratitude. And especially with one of the churches that was up in Paradise, they were actually quite anti, against our church before the fire," Sister Perry shares. "They were actually teaching anti-Mormon classes. When we took the painting up there, we were a little hesitant to go in, but they actually brought us in and, while their congregation was assembled, they had us come up in front and present this painting to their pastor, and everyone clapped and applauded. It was touching."

These paintings serve as a reminder to the fire survivors of what they've endured together and a reminder of who it is who helped them endure—our Savior, the source of strength and peace.

"It has drawn the congregations together," Sister Perry says. "It's just been incredible. The stories that we've heard from people, not only from our church but from every church, the gratitude and the love that they have shown has just been wonderful. . . . It's drawing the community closer together through service and love to those people who were so devastated by the fire." 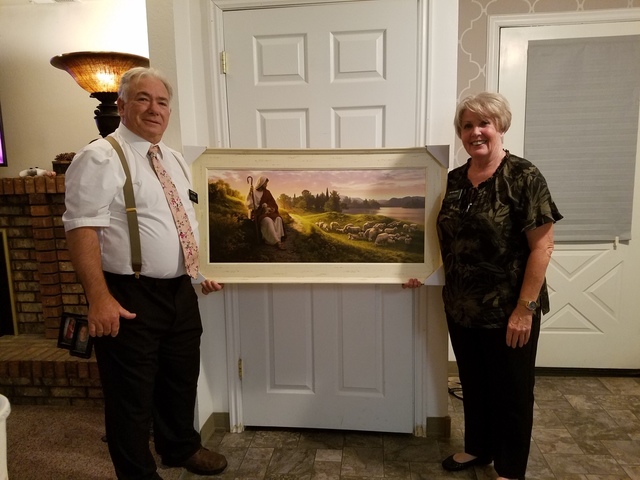 In addition to the paintings, Meyer estimates that his stake has served 16,000 members of the community in some way or another.

These members transformed a tragedy into an opportunity to serve—beauty for ashes.

“It’s a really important piece of being part of the community, serving and caring about one another regardless of religious or non-religious affiliation,” Meyer says. “A lot of walls have been broken down here.”

And the community has responded.

“The amount of love for one another has increased dramatically,” Meyer says. “The amount of care and attention to one another has increased dramatically. . . . The Lord really asked for us to engage in the community and that’s happened—and is happening—and these paintings are a really big, important part of that, with [our] affiliation with our other friends of faith."

Sister Perry adds, "Whenever [the fire survivors] look at that painting, they are going to think of Paradise—the before and the after. The before, of course, was their memories of their homes and their loved ones, but afterward is a messaged to them that even though we go through such trials and such terrible things there is always hope and through our Savior Jesus Christ there is strength and courage to carry on and to make this tragedy a building block rather than a stumbling stone."

All images courtesy of Brian Herring