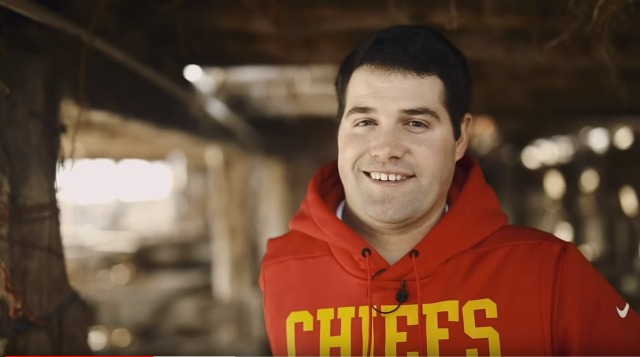 After Losing His Arm, How This Church Member Became Andy Reid's Senior Assistant

This story originally ran on LDS Living in June 2019.

After an accident caused him to lose the use of his right arm at age 4, Porter Ellett had good reason to feel handicapped. After all, everything—from tying his shoes to climbing fences—became much more difficult with just one arm.

“My parents, they deserve a lot of credit because they didn’t baby me. They let me struggle, figure it out, so I was able to learn and grow from it,” Ellett told BYU Magazine.

Ellett is a member of The Church of Jesus Christ of Latter-day Saints, and even on the day he was set to enter the MTC and begin his missionary service, he was still asked to pull his weight.

“I thought my dad would let me sleep in: ‘Oh he’ll take it easy on me this morning because it is kind of my last morning home,’ Ellett says. “And he didn’t. So I woke up at 6 a.m., and I went and I fed the calves.”

Ellett's parents allowed him to become self-sufficient, and he became a good athlete, starring on his high school’s basketball, baseball and track teams.

“The world would probably call it tough love, but I would call it real love,” he says.

Because he was allowed to struggle and figure things out on his own, Ellett learned that life can get hard, but with the right perspective, anything can be overcome.

“You face a struggle, you figure things out, you regroup, and then you move forward,” he says.

That mindset has served him well throughout his life, from his time as a missionary in California to his present-day job working with the Kansas City Chiefs.

When Porter J. Ellett (BS ’14) interviewed for a senior assistant position with the Kansas City Chiefs’ Andy W. Reid (BS ’82), the coach listed the various job responsibilities, then summed things up: “Basically you need to be me when I’m not here. Or when I am here, you need to be my right-hand man and keep me going in the right direction.”

No problem, Ellett eagerly replied, “as long as you would be okay with your right-hand man not having a right hand.”

The coach laughed. “All right,” he said, “then you’ll be my left-hand man.” Ellett got the job, and the nickname stuck. For the past two seasons, Ellett has been Reid’s shadow, single-handedly managing game plans, scheduling, and other tasks for the veteran coach.

Ellett has always loved sports, saying, “My passion for sports kind of comes from somewhere, I would say, pretty deep. What I loved about sports is once you stepped on the court or the field, it didn’t matter what you looked like or even if you were missing an arm or anything,” he says. “I loved the great equalizer of the field.”

So when the opportunity arose to leave his job at Goldman Sachs and instead go work as an assistant to Andy Reid, the head coach of the Chiefs, he took it, and, like everything else in his life, he excelled in his new role.

“He’s always smiling. Everybody says he has the hardest job with the longest hours. My dad really needs it to be done well,” Andy Reid’s daughter says. “And at the end of a season, everyone is exhausted, but Porter is still pumped, saying, ‘I can’t wait for next season.’”

Ellett has taken the opportunity to share his story with others, appearing in the New Era as a youth and holding firesides.

“You should laugh at yourself. You should smile. You should ignore people whose opinions don’t matter,” Ellet told BYU Magazine. “Pick the three or four people you are going to listen to. For me, my parents’ opinions matter, my wife’s, God’s, and then Coach Reid’s, as far as my job goes. Pick who you’re listening to and just listen to them.”