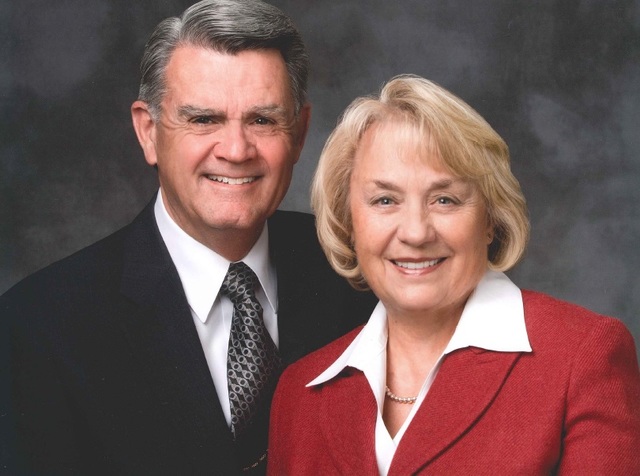 It was not only an improbable love story, it was an impossible love story. She was Mormon; he was Catholic. She was engaged; he was preparing to become a priest.

But when 20-year-old Gary J. Coleman looked out of his Washington State University apartment window, he received a strange prompting that changed the course of his life.

Across the way was a beautiful woman, Judith "Judy" England, who only lived in the university apartments for a few short months. Gary and Judy struck up a conversation, discovering they had grown up in small towns only 40 minutes apart.

"Here we are, she’s only about 30 feet from me in another apartment in the window, and I’m looking out the window of my apartment. The Spirit says, ‘That girl will be your wife,'" Elder Coleman recalls.

As a devout Catholic contemplating entering the seminary, Coleman already had doubts about whether a life of celibacy was truly what God had planned for His children. But this revelation took Gary by surprise. "I’m just thinking, what in the world was that message I heard? How does that work?" Elder Coleman remembers, but he still acted on the message, asking Judy if he could take her for a walk.

Immediately, the two learned about the differences in their beliefs and backgrounds. Gary grew up in a devout family that had been named the Catholic family of the year in the Yakima diocese. Judy, on the other hand, was born to LDS parents but grew up attending the Methodist church since there were no LDS chapels near her hometown. She had only recently begun learning about her Mormon roots at institute, but knew she wanted a celestial marriage in the temple.

Despite their differences, Gary and Judy became friends, introducing each other to new faiths.

"I just couldn’t look at another church. That was a sin," Elder Coleman says. "In my life, in my career, in my youth it was a sin to investigate another church." Though Gary wanted to learn about Judy's religion, the conflict within his own faith was too great.

Until Gary noticed a friend of Judy's, a returned missionary, was teaching a class on campus. It was called "Mormons’ Views on Life and Death." Gary stood outside the classroom, torn between his upbringing and this new desire to learn about the gospel. "I walked back and forth and finally went in the room," Elder Coleman says. That's when he heard John Madsen teach the plan of salvation.

Gary remembered the outline sketched on the board and the feelings he had as he learned what all the images meant. A year later Gary received a copy of the Book of Mormon, marked with certain verses that "would lead a person through the book to the testimony of Moroni: 'when you receive these things, I would exhort you to ask God’ and so I did," Elder Coleman remembers. "After just 87 verses and praying, I received my testimony."

After that experience, Gary rushed to the institute and met with John Madsen, who had become his good friend and teacher. "I said, ‘I want to join your Church.’ He said, ‘You can’t. You haven’t had the lessons.’ I said, ‘I can. I just had one.’ He said, ‘No, you have to have the lessons,’" Elder Coleman remembers. "‘Well, who gives the lessons?’ ‘The missionaries.’ ‘Will you find them because I want the lessons to join the Church?’"

Judy remembers how quickly this change took place, "One weekend he came up to Spokane where I was teaching school and said, 'I can’t investigate this church anymore.' He said, 'If I do this it will be a mortal sin for me.'

"So he left, but within the next few days he called me and told me that he was now seeing missionaries. And then he came up to Spokane on the weekend and I opened the door and he had a suit on and there was a light about him. And I said, 'When are you going to be baptized?' He said, 'In three weeks.' And he was, and he’s never looked back."

Gary Coleman took all the fire of faith and devotion he felt for Catholicism and channeled it into this new faith.

"She was with me at my baptism," Gary says of Judy. "It was then that I asked her if she would marry me, now a member, and she said, ‘Yes, if you’ll take me to the temple.’ I didn’t know what that was, but I said, ‘Okay.’ And so, that’s what we did."

"A good solid Catholic family, in fact, the Catholic family of the year in our diocese, is going to be shattered if one of their sons, or their brothers, leave the [Catholic] church," Elder Coleman says. "It was very hard to get back into their space of acceptance and love again because they thought I had really hurt them."

But the hurt opened a new door of understanding for the Coleman family. Just 36 hours after his baptism, Gary saw his brother on the Washington State University campus. "He looked at me and said, ‘Did you do it?’ I said, ‘Yes.’ ‘How do you feel?’ I said, ‘I feel good,’" Elder Coleman remembers. What his brother said next amazed Gary. "‘Well, Gary, you’re my older brother, and I know you wouldn’t have been baptized if you didn’t think it was right.’" Just 90 days after that conversation, Gary was with his younger brother when he was baptized. Though his parents remained devout Catholics, eight years later, Gary's sister and her family also joined the Church.

"Someone has to start the process to bless a family eternally," Elder Coleman says. "I’m now doing temple work and family history work for thousands of those ancestors. Someone has to be the first in a family. In our family, it was me. There were choice times, you can imagine. But the struggle was also very real. You can imagine how the opposition would be hitting a new convert. They throw anti-Mormon literature at you; they just want to beat you down because of what you’ve done. It’s a tough time; I know that. I can speak to that, so when I invite people to have this experience, I know there’s a price to be paid."

Just a few years after his baptism, Gary Coleman was ordained a Seventy in his stake. "In those days, each stake had Seventies. And Seventies were the local missionary in the Church in the '60s," Elder Coleman says. The following year, he was put in the full-time mission presidency in the Washington State Mission. Throughout his time in the Church, he has served in five mission presidencies, three times as a mission president (California, Arcadia—three years; New York, Rochester—three months; Jamaica—one month). "Missionary work, this is my life," Elder Coleman says. His 28-year career in seminaries and institutes were essential to learning and teaching the gospel.

In 1992, Gary Coleman was called to serve as a member of the Seventy for the Church at the same conference session as his good friend John Madsen. "We’re the only two men since the days of Joseph Smith where one baptized the other and they both became general authorities the same conference," Elder Coleman says.

The missionary work continued with his new call. "Judy and I have been on 135 mission tours. That’s what we love," Elder Coleman says. But with these new mission experience came increased learning opportunities. "President Hinckley said to me in April of 1993, after I’d been in the Quorum about seven or eight months, he said, 'Elder, do you speak Spanish?’ ‘No, I don’t President.’ ‘Well, then you’d better learn.’ That was our introduction to the fact that we were going to be assigned to Spanish-speaking area presidencies for 10 of the next 19 years," Elder Coleman remembers.

Learning Spanish only opened more gateways for Elder Coleman to share the gospel, including through the six books he has written to share his beliefs and journey as a convert. Printed in both English and Spanish, Elder Coleman's books focus on The Journey of Conversion, member missionary work, and the joy of the gospel. His latest book, Yes. Mormons Are Christian:How a Devoted Catholic Discovered the Restored Gospel of Jesus Christ tells Elder Coleman's own spiritual journey, providing another missionary tool that teaches others their purpose on earth and their divine destiny as children of God.

"Those who have testimonies in faith just need to share them," Elder Coleman says. "That’s all I’ve ever done, is invite people to see what we have."

His unique perspective and background led him to speak on the common question of "Are Mormons Christian?" in April 2007 general conference. This talk was later adapted into the Church's first official Mormon message, clarifying LDS beliefs in powerful ways.

Now, as an Emeritus General Authority, Elder Coleman continues to do what he has done since he joined the Church: share the gospel he loves.

"People ask me ‘What do you do now that your husband is an Emeritus General Authority?’ and I just say ‘The same thing we have always done, and that is we reach out to people,’" Judy says. "It doesn’t matter if it’s people in the Church or out of the Church or members who are questioning. We have a lot of people in our lives and the Lord continues to put them there."

A perfect example of this was when Elder Coleman jumped up during dinner with friends to introduce himself to and congratulate a returned missionary he saw enter the restaurant. One of their family friends turned to Judy and said, "He’s never free; it’s in his heart." Judy says, "That is the most perfect description that I can think of regarding my husband’s missionary work."

But none of this could have been possible without that one Sunday Gary Coleman saw Judy England from his apartment window. "He did not share with me the spiritual prompting he had the first time he saw me until after we were married—which I think is important—but I think if that revelation had not happened, the relationship would not have gone anywhere. Neither one of us would have ventured into the other's territory." But that one moment was pivotal in Elder Coleman's life.

"Anything I’ve done is because the Lord brought Judy England into my life with the gospel," Elder Coleman says. "Then we were able to share the gospel in our marriage and in our family. So I don’t take any credit for this, I think the Lord helped us. I know the Lord helped us and I’m feeling that she’s as much a part of this as I am because it wouldn’t have happened without her."

Learn more incredible insights from Elder Gary J. Coleman in Yes. Mormons Are Christian: How a Devoted Catholic Discovered the Restored Gospel of Jesus Christ, available at distribution centers and Deseret Book stores in English and Spanish and soon in Portuguese.